Accessibility links
Czech Doctors Prepare To Abandon The Republic Fed up with shockingly low pay and long hours, doctors in the Czech Republic are threatening to leave the country en masse. It's made no difference yet to the cash-starved government, which is moving ahead with cost-cutting plans. 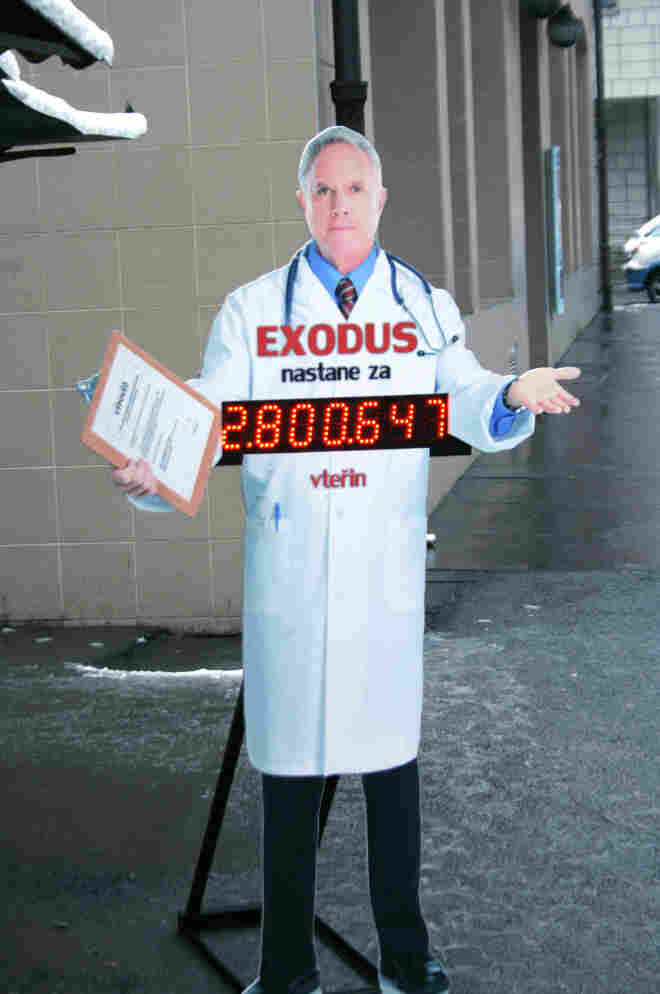 A cardboard cut-out that reads "countdown to exodus" alerts Czechs that some doctors may be leaving the country for better jobs. Eric Westervelt/NPR hide caption

Fed up with shockingly low pay and long hours, doctors in the Czech Republic are threatening to leave the country en masse.

More than a quarter of all Czech doctors have already signed a declaration stating their intention to emigrate to better-paying European countries if the Czech government does not substantively address their concerns by the end of this year.

But the cash-starved Czech government is ignoring the warnings so far, dismissing the threat as a gimmick and moving ahead with cost-cutting plans.

The Ballad Of The Poor Doctor

Dr. Peter Igaz, 33, has taken a leave of absence from his day job in Karlovy Vary. He now spends his days driving a surly old 1975 ambulance across the Czech Republic like a kind of medical troubadour.

The front of the battered ambulance reads: "Pay doctors more than a street sweeper. Keep us here!" On the back, it reads: "Thank you, we're leaving."

Igaz preaches in hospitals and town squares, urging citizens to support the efforts of the doctors' union to change how physicians are treated, and to convince people that the threat to leave is real.

Smaller hospitals could be forced to close, he tells them. He blames government corruption, incompetence and communism's bitter hangover for doctors' woes.

"Doctors are so sick and tired of this situation," he says. "We [have been] riding this ship to the bottom of ocean for long enough."

Igaz, a gastroenterologist, often works more than 80 hours a week. Nearly 10 years into his career, he says he makes only about 700 euros -- about $900 -- a month. That's enough to pay rent on a modest flat and food, but not much else.

His is a prestigious job, he says, but he can't eat prestige. The Czech health system is simply falling apart.

"I see that if I don't leave my job, I will just accept these terrible conditions, and I will see the system collapsing with me," he says. "This is the last call of desperate people who are still here -- let's do something about it before it's really too late."

Bluff Or Not, The Problem Is Real

In a cold, snow-dusted town square market in Decin, Igaz and another member of the doctors' union attract passersby with offers of a free blood pressure screening. Near the card table and chairs of their makeshift booth stands a large cardboard cut-out of a doctor with a clicking digital clock that reads "countdown to exodus."

Anna Korlova, a heavy-set woman, takes advantage of the screening. She says she supports the doctors' reform efforts.

"I am afraid that more and more educated Czech people are leaving and moving abroad," she says. "I think the authorities should think about this and do more to help them stay. They should be paid more. They deserve it."

Doctors' salaries in the Czech Republic differ from region to region, but a starting base salary for a Czech physician is around $11,000 a year, according to numbers from the government and physicians groups.

Czech doctors also get overtime pay, but many complain they're not fully compensated for the extra hours and, moreover, the amount of extra work often far exceeds European Union labor regulations.

The Czech government largely dismisses the doctors' threat to leave as a gimmick. Government officials say they want to raise salaries, reduce hours and improve conditions, but insist it isn't possible right now, given the ongoing financial crisis in the European Union. Some even see a silver lining should the doctors make good on their threat.

"Yes, it is a problem if doctors leave. It will, on the other hand, allow us to raise the salaries and benefits of those who stay, not only of other doctors, but of nurses and other hospital workers," says Vlastimill Srsen, spokesman for the Czech Health Ministry.

"I would also like to stress that many are just threatening to leave," he adds. "We don't foresee that many will actually go."

If they do, it's good news for German health authorities, who are champing at the bit to fill their own shortfall of 7,000 doctors. At a recent recruitment fair in Prague, representatives from some 30 German and Austrian hospitals showed up offering Czech doctors up to five times their salary -- for about half the hours.

Choosing Between Home And A Better Life

Yet many physicians insist they are serious -- especially the younger ones. Dr. Martin Svetska is doing his residency in pediatric surgery at Prague's teaching hospital.

The 29-year-old also represents 1,500 other newly qualified doctors as head of the Czech Young Doctors Association. He feels he has no choice but to sign the declaration and hand in his notice.

"You have to leave your friends, your parents, your country," he says. "But if you earn so little money, you can't have a family here in Prague because the salary is enough only for a flat and food, and only for you."

The lack of prospects isn't just affecting younger doctors. Dr. Alexander Zaverka has been a gynecologist for 12 years at Decin's big public hospital. He'd like to see more of his wife and two kids, as well as get a decent salary.

In neighboring Germany, Zaverka could likely earn at least 6,300 euros -- about $8,000 -- a month, excluding any pay for overtime above the standard 40-hour workweek.

He says he's ready to send out resumes to hospitals in Germany, the U.K. and maybe Sweden. He'll likely give notice Jan. 1.