Accessibility links
A Wave Of Illegal Immigrants Floods Greece Despite EU assistance, Greece is overwhelmed by the influx of migrants who believe the financially crippled nation still has more to offer than their home countries. 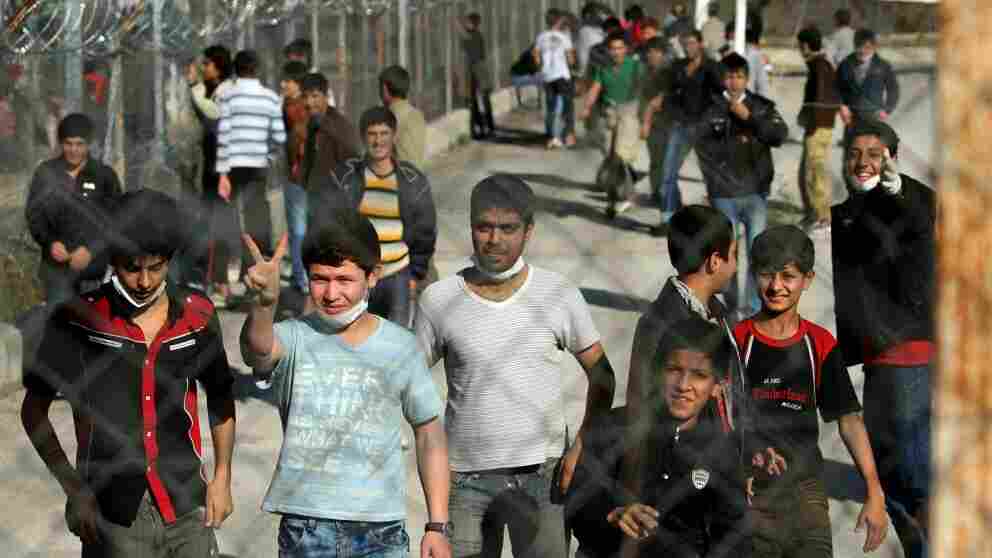 Immigrants wait at a detention center in the village of Fylakio near the the Greek-Turkish border. Sakis Mitrolidis/AFP/Getty Images hide caption 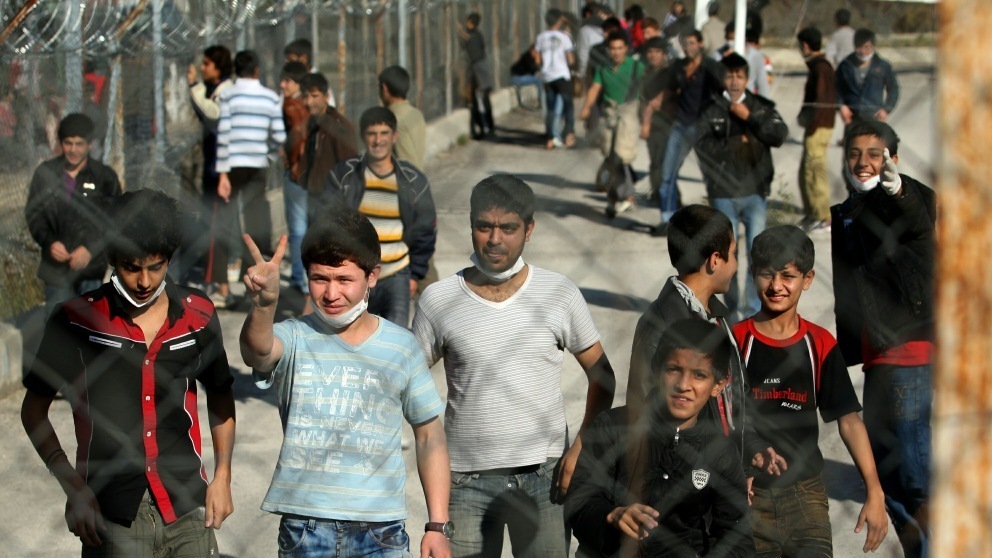 Immigrants wait at a detention center in the village of Fylakio near the the Greek-Turkish border.

Already struggling with a massive debt crisis that is shrinking its economy, Greece is also facing a rising tide of illegal immigration.

The country's land border with Turkey makes it a major gateway to the European Union, which says more than 90 percent of this year's illegal immigrants entered through Greece.

Despite EU assistance, Greece is overwhelmed by the influx of migrants who believe the financially crippled nation still has more to offer than their home countries.

Detained But Not Deterred

On one cloudy morning outside the police station in Orestiada, officers lead seven young migrants -- all men from Afghanistan and Pakistan -- into an armored van.

One gives his name as Hamain. He's a shy, skinny 17-year-old from a village near Kandahar.

He says he came from a poor family and wants an education. The police shut the van's doors and drive away.

They're taking Hamain to the Fylakio detention center, which lies amid cotton fields and acacia trees. Birds perch on the tall barbed-wire fence that surrounds the center. Hamain probably won't stay for long; it's so crowded at the center that police must release migrants right after they're processed.

One migrant released on this day is Aoua Nasrudin, who's 35 and from Sudan. "To work there and get money, it's difficult," he says. "And the life is also very worse. And there's a war there, and people kill each other. That's why we leave it. Because it's not good for us."

In the past, Nasrudin and other migrants would have crossed into Europe by sea. But improved coast guard patrols have cut off those routes, so now smugglers use the land border between Greece and Turkey. Illegal crossings at the border went up nearly 370 percent this year, according to Frontex, the European Union border agency.

Strangers In A Strange Land

"This is a really massive flow of migrants across the border," Frontex spokesman Michal Parzyszek says. "I mean, people are asking what Greece could do. I cannot imagine any country to handle this issue alone." 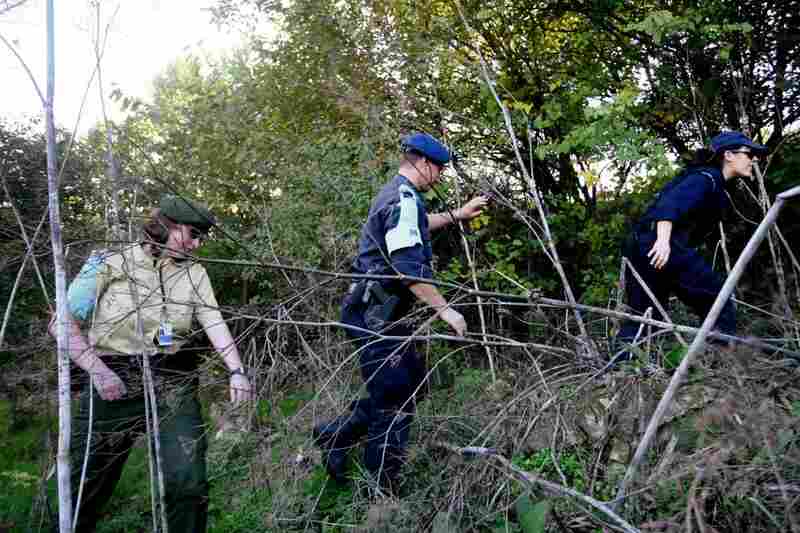 A Frontex team from the European Union patrols in Orestiada, near the Greek-Turkish borders. Sakis Mitrolidis/AFP/Getty Images hide caption 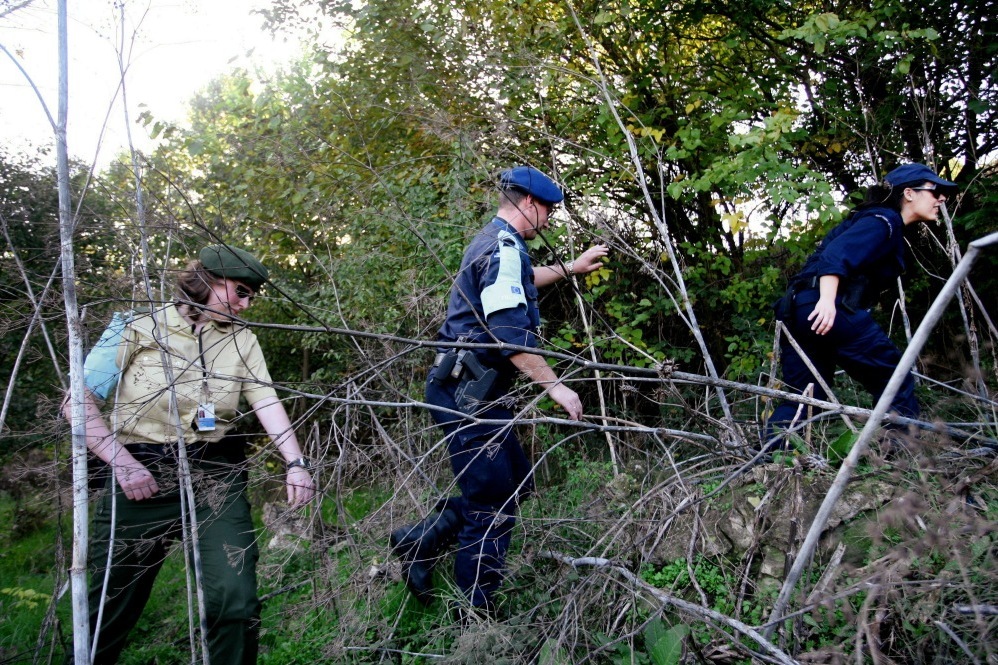 A Frontex team from the European Union patrols in Orestiada, near the Greek-Turkish borders.

Frontex says fewer people have crossed since November, when the agency sent 175 officers to help the Greek police.

Eva Hatziagnidou is happy Frontex is there. She runs a kiosk in Nea Vyssa, a quiet village near the Turkish border. At night, she sees migrants walking through farm fields. In the morning, she sees them bathing in the stone fountain in the main square.

She asks: Who are these people? What do they want? You just don't know, because they're strangers.

The migrants travel without papers. Frontex says almost half claim false nationalities from war-torn countries to get asylum.

Getting into Greece can be dangerous, too. Many migrants have drowned crossing the nearby Evros River. The police bring the bodies to Mehmet Serif Damadoglou, the mufti in the mixed-Christian and Muslim region. He buries the dead on a hill near his village, but says he also worries about the living.

Without passports or money, he says, they're falling into a trap.

A Land Of Little Opportunity

Most migrants released from detention centers must leave Greece within 30 days. But most only get as far as Athens. In a dreary courtyard in the city center, migrants line up for free food prepared by local churches.

Nidal Saker is a 40-year-old Palestinian who came from Gaza five months ago. He says he was beaten by anti-immigrant thugs. He limps on crutches.

An Afghan woman who gives her name as Hasma is also in the food line. She's a 30-year-old schoolteacher from Kabul with three young children.

"We don't have money," she says. "This country's economy is very low. They don't have this much economy to accept other immigration people."

But migrants are still coming. Frontex expects more than 80,000 people to have entered Greece illegally by the end of the year.