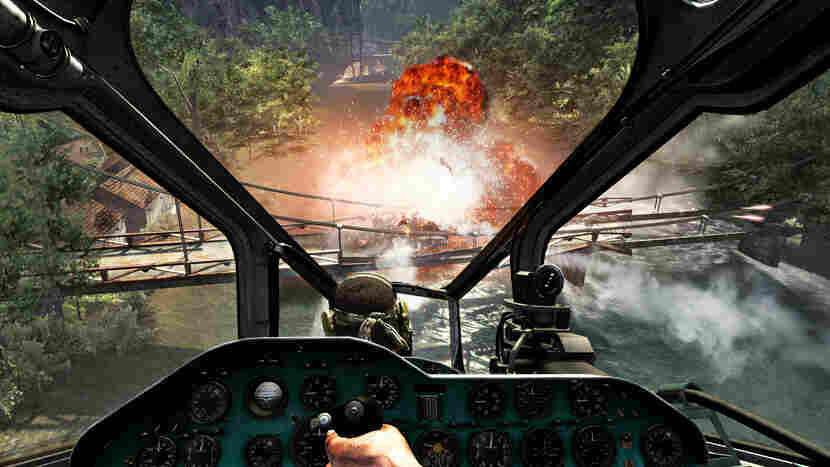 In this video game image from Call of Duty: Black Ops, special forces agents pilot a gunship up the Mekong River. Scientists say immersion games like this one may develop certain parts of kids' brains. Activision via AP hide caption

Parents, the next time you fret that your child is wasting too much time playing video games, consider new research suggesting that video gaming may have real-world benefits for your child's developing brain.

Daphne Bavelier is professor of brain and cognitive sciences at the University of Rochester. She studies young people playing action video games. Having now conducted more than 20 studies on the topic, Bavelier says, "It turns out that action video games are far from mindless."

Her studies show that video gamers show improved skills in vision, attention and certain aspects of cognition. And these skills are not just gaming skills, but real-world skills. They perform better than non-gamers on certain tests of attention, speed, accuracy, vision and multitasking, says Bavelier.

Vision, for example, is improved in gamers. Specifically, the kind of vision called "contrast sensitivity," that is, the ability to see subtle shades of gray. 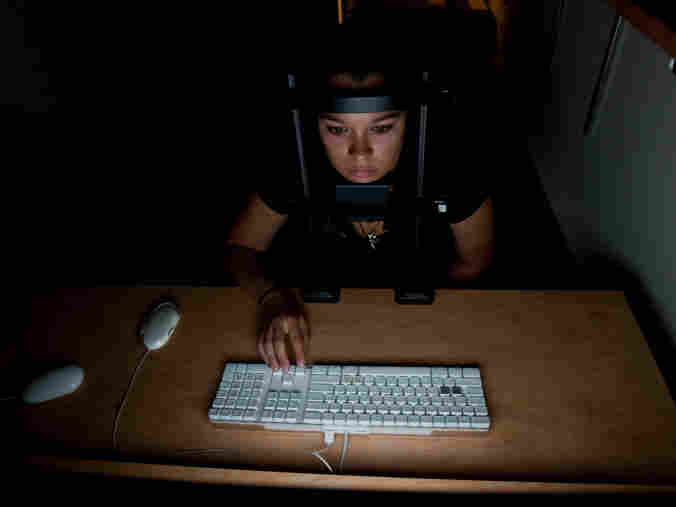 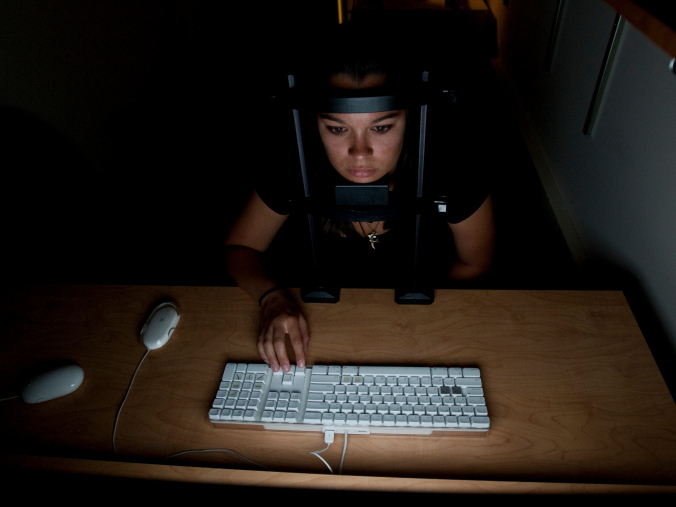 A test subject in cognitive scientist Daphne Bavelier's study tries to follow the direction of moving dots on a computer screen.

"And this is a skill that comes in very handy if you're driving in fog," Bavelier says. "Seeing the car ahead of you is determined by your contrast sensitivity." Skilled gamers also are able to see smaller type size than non-gamers on vision tests.

But Bavelier wanted to know which came first: Is better vision caused by playing action video games, or is better vision a skill that gamers bring to the table? Perhaps, Bavelier wondered, gamers already have sharp vision, and are thus good at action games and vision tests.

To check this out, Bavelier recruited non-gamers and trained them for a few weeks to play action video games. "At the end of their training," Bavelier says, "they're told, go back home. No more gaming. They're not allowed to play any games."

Then they came back into the lab every few months to have their vision re-checked.

Bavelier found that their vision remained improved, even without further practice on action video games. "We looked at the effect of playing action games on this visual skill of contrast sensitivity, and we've seen effects that last up to two years."

Gamers, Bavelier has also found, have better attention than non-gamers -- they stay focused. She gave gamers several tests to measure attention and found that gamers get less distracted by what came before and by events in their surroundings.

They are able to detect, for example, new information coming at them faster. So as a result, they are more efficient. And Bavelier also says that gamers can switch from task to task much faster than non-gamers, making them better multitaskers.

Gaming may improve children's cognitive skills, but it's not without drawbacks: There's a lot of evidence showing a correlation between gaming and childhood obesity. New devices — like Nintendo Wii, PlayStation Move or Kinect for Xbox 360 — might help game lovers get off the couch, but do games used with these systems show the same potential to improve a child's aptitude for tests and other challenges?

Not really, says Daphne Bavelier, a brain and cognitive sciences researcher at the University of Rochester. "Those games typically don't have the same effect [on the brain]," she says.

At the same time, she said some studies have found that exercise itself can have an impact on the cognitive skills of older adults, but she says that we don't know yet whether the same is true for the younger set.

"We see that typically in people that don't play action games, their reaction time [on tests of multitasking] lengthened by 200 milliseconds, which is something like 30 percent," Bavelier says. "But in gamers, it lengthened only by 10 percent."

Brain researcher Jay Pratt, professor of psychology at the University of Toronto, has studied the differences between men and women in their ability to mentally manipulate 3-D figures. This skill is called spatial cognition, and it's an essential mental skill for math and engineering. Typically, Pratt says, women test significantly worse than men on tests of spatial cognition.

But Pratt found in his studies that when women who'd had little gaming experience were trained on action video games, the gender difference nearly disappeared.

After 10 hours of training, Pratt brought the women back to the lab and gave them the spatial cognition test again.

"And we found that the women improved substantially, and almost caught up to the men's scores," he says.

Pratt also investigated another area of spatial cognition called "the useful field of view," which is essentially how much of the visual field a person can perceive at any given moment. In other words, as Pratt describes it, "How wide can you cast your net of attention?"

Typically, there are baseline differences between men and women on this test, with men performing significantly better. But Pratt found that training on action video games enabled women to significantly improve on this test of visual attention.

Pratt says playing these video games changes your ability to learn, and to find and integrate new information.

To better understand how gamers acquire these non-gaming skills, neuroscientist Lauren Sergio, of York University in Toronto, looks inside the brain. She's found an important difference between gamers and non-gamers in how and where the brain processes information. She likens skilled gamers to musicians.

"If you look at professional piano players, professional musicians, you see this phenomena where they don't activate as much of their brain to do very complicated things with their hands that the rest of us need to do. And we found that the gamers did this as well."

"The non-gamers had to think a lot more and use a lot more of the workhorse parts of their brains for eye-hand coordination," Sergio says. "Whereas the gamers really didn't have to use that much brain at all, and they just used these higher cognitive centers to do it."

So the next time you despair that your child is immersed, yet again, in an action video game, remember: Gaming can improve some important skills.

Bavelier hopes that more action video games will be developed that train these skills without the violence found in the typical games available today. And all the researchers suggest that parents should limit their kids' time on video games. Moderation, they say, is the key.