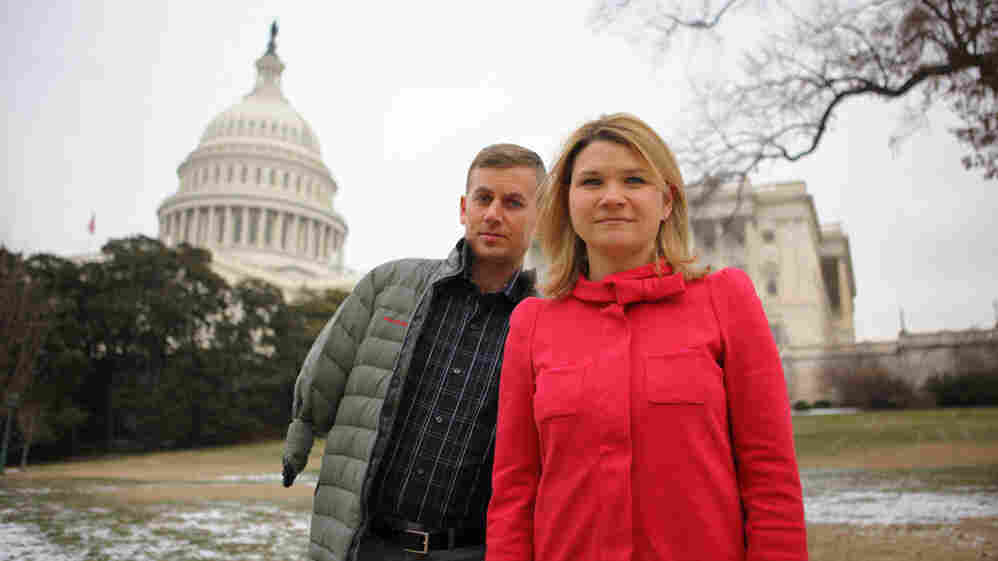 Sarah Wade, 36, and her husband, Ted Wade, 33, of Chapel Hill, N.C., often travel to Washington, D.C. for his medical care after he was injured while riding in a Humvee in Mahmudiyah, Iraq, on Feb. 14, 2004, and suffered a traumatic brain injury, as well as an above-the-elbow amputation of his right arm. Sarah has also been actively lobbying to get the right kind of care for her husband. Coburn Dukehart/NPR hide caption 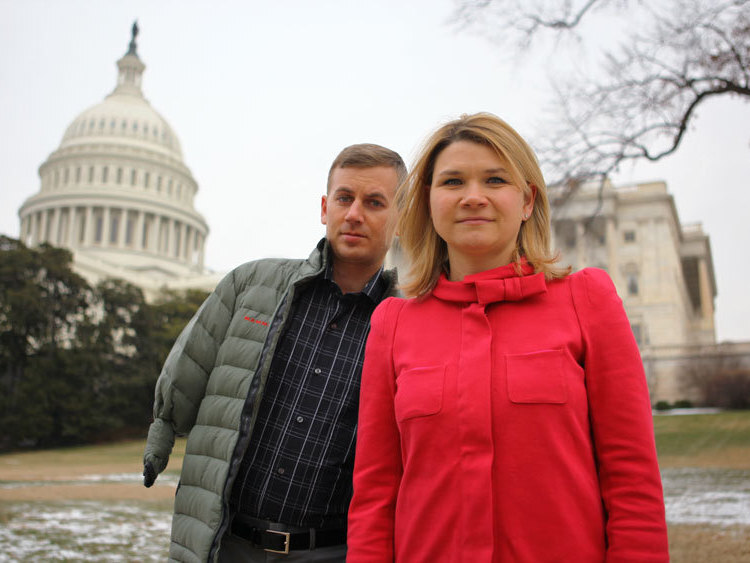 Sarah Wade, 36, and her husband, Ted Wade, 33, of Chapel Hill, N.C., often travel to Washington, D.C. for his medical care after he was injured while riding in a Humvee in Mahmudiyah, Iraq, on Feb. 14, 2004, and suffered a traumatic brain injury, as well as an above-the-elbow amputation of his right arm. Sarah has also been actively lobbying to get the right kind of care for her husband.

During the past few decades, scientists have become increasingly persuaded that people who suffer brain injuries benefit from what is called cognitive rehabilitation therapy — a lengthy, painstaking process in which patients relearn basic life tasks such as counting, cooking or remembering directions to get home.

Many neurologists, several major insurance companies and even some medical facilities run by the Pentagon agree that the therapy can help people whose functioning has been diminished by blows to the head.

Tricare is an insurance-style program covering nearly 4 million active-duty military and retirees. It is refusing to pay for a therapy that teaches life basics, otherwise known as cognitive rehabilitation, to troops with traumatic brain injuries. An NPR News/ ProPublica investigation found:

But despite pressure from Congress and the recommendations of military and civilian experts, the Pentagon's health plan for troops and many veterans refuses to cover the treatment — a decision that could affect the tens of thousands of service members who have suffered brain damage while fighting in Iraq and Afghanistan.

Tricare, an insurance-style program covering nearly 4 million active-duty military and retirees, says the scientific evidence does not justify providing comprehensive cognitive rehabilitation. Tricare officials say an assessment of the available research that they commissioned last year shows that the therapy is not well proven.

But an investigation by NPR and ProPublica found that internal and external reviewers of the Tricare-funded assessment criticized it as fundamentally misguided. Confidential documents obtained by NPR and ProPublica show that reviewers called the Tricare study "deeply flawed," "unacceptable" and
"dismaying." One top scientist called the assessment a "misuse" of science designed to deny treatment for service members.

The Battle For Care Of The Wars' Signature Injuries

Tricare's stance is also at odds with some medical groups, years of research and even other branches of the Pentagon. Last year, a panel of 50 civilian and military brain specialists convened by the Pentagon unanimously concluded that cognitive therapy was an effective treatment that would help many brain-damaged troops. More than a decade ago, a similar panel convened by the National Institutes of Health reached a similar consensus. Several peer-reviewed studies in the past few years have also endorsed cognitive therapy as a treatment for brain injury.

Tricare officials said their decisions are based on regulations requiring scientific proof of the efficacy and quality of treatment. But our investigation found that Tricare officials have worried in private meetings about the high cost of cognitive rehabilitation, which can cost $15,000 to $50,000 per soldier.

With so many troops and veterans suffering long-term symptoms from head injuries, treatment costs could quickly soar into the hundreds of millions, or even billions of dollars — a crippling burden to the military's already overtaxed medical system.

How NPR News and ProPublica Reported On Tricare

The battle over science and money has made it difficult for wounded troops to get a treatment recommended by many doctors for one of the wars' signature injuries, according to the NPR and ProPublica investigation. The six-month investigation was based on scores of interviews with military and civilian doctors and researchers, troops and their families, visits to treatment centers across the country, confidential scientific reviews and documents obtained under the Freedom of Information Act.

"I'm horrified," said James Malec, research director at the Rehabilitation Hospital of Indiana and one of the reviewers of the Tricare study. "I think it's appalling that we're not knocking ourselves out to do the very best" for troops and veterans.

Defense Secretary Robert Gates, who has complained over the past year about the growing cost of the Pentagon's health care budget, declined a request for an interview. George Peach Taylor, the newly appointed acting assistant secretary of defense for health affairs, the top ranking Pentagon health official, also declined repeated interview requests. Tricare officials defended the agency's decision not to cover cognitive rehabilitative therapy and said it was not linked to budget concerns.

He said those standards can be difficult to meet with cognitive rehabilitation. Therapists design highly individualized treatment plans, often relying on a variety of different techniques. The holistic approach and lack of standardization makes it hard to measure the effects of the therapy, he added.

DeMartino said cost played no role in the agency's decision, calling such a suggestion "
completely wrong." He defended the agency's studies of cognitive rehabilitation, calling them objective scientific reviews designed to ensure troops and retirees receive the best treatment possible.

Cognitive rehabilitation therapy "is a new field for us," De Martino said. "We don't know what it is. That's really an important thing. You don't want to send people out when you don't know what treatment they're going to get and what the services are going to be."

Officials at the Pentagon are themselves divided on the value of the treatment. A handful of military and veteran facilities provide cognitive rehabilitation therapy, though most do not have the capacity or offer programs of limited scope.

Tricare was designed to fill in such gaps in the military health system by allowing troops and veterans access to civilian medical providers. But since Tricare has a policy against covering cognitive rehabilitation, service members and retirees who seek treatment at one of the nation's hundred of civilian rehabilitation centers could have their claims denied, or only partly paid.

The contradictory policies have resulted in unequal care. Some troops and their families have relied upon high level contacts or fought lengthy bureaucratic battles to gain access to civilian cognitive rehabilitation programs which provide up to 30 hours of therapy a week. Soldiers without strong advocates have been turned away from such programs, or never sought care, due to Tricare's policy of refusing to cover cognitive rehabilitation therapy.

As a result, many soldiers, Marines and sailors with brain injuries wind up in understaffed and underfunded military programs providing only a few hours of therapy a week focused on restoring cognitive deficits.

Sarah Wade's husband, Ted, was a sergeant with the 82nd Airborne Division when a roadside bomb tore through his Humvee in February 2004. The blast severed his right arm above the elbow, shattered his body and left him with severe brain damage.

After the military medically retired her husband later that year, Wade struggled to find appropriate care for him. The closest VA hospital set up to handle such complex injuries was in Richmond, Va., a 320-mile drive from their home in North Carolina.

Tricare, however, would not pay for cognitive rehabilitation at a nearby civilian program. Wade, who once worked as an intern on Capitol Hill, turned herself into a one-woman lobbyist on her husband's behalf. She called her representatives and met with senior VA and DOD officials. She testified before Congress, met President George W. Bush and Gates, and was recently invited to the White House by President Barack Obama for a bill signing ceremony.

Wade managed to set up a special contract between the VA and a local rehabilitation doctor to help her husband. But now she wants to move back to Washington, D.C., to be closer to family.

She must begin her fight all over again — more phone calls to Tricare, more visits to government offices, more battles to get Ted Wade the care he needs.

"We go to Capitol Hill like some people go to the grocery store," Wade joked one afternoon during a recent visit to Washington. "If we can't figure it out, then probably nobody can."

The Brain Injury Association of America, a grassroots advocacy group for head trauma victims, started lobbying Congress and the Defense Department to order Tricare to cover rehabilitation for service members.

The campaign was a natural extension of the association's mission. Each year, more than 1.4 million American civilians suffer brain injuries in car accidents, strokes and other medical emergencies. They and their families often have to battle private insurance companies for cognitive rehabilitation.

The insurance industry is divided: Five of 12 major carriers will pay for cognitive rehabilitation therapy for head trauma, according to Tricare's study. Aetna, United Healthcare and Humana cite national evidence-based studies and industry-recognized clinical recommendations that point to the therapy's benefits.

The federal Centers for Medicare and Medicaid Services does not have a single national policy on cognitive rehabilitation. Instead, it leaves decisions to local contractors, often insurance carriers who process claims for the agency. The contractors are able to provide the therapy case by case, so long as they determine the treatment is "reasonable and necessary," a Medicare spokesman said.

Carriers and doctors providing the service can point to a long list of medical associations and scientific studies backing the effectiveness of cognitive therapy: The National Institutes of Health;the National Academy of Neuropsychology and the British Society of Rehabilitation Medicine, among others, have weighed in supporting the treatment.

Armed with such evidence, brain injury association lobbyists did not have much trouble finding support in Congress. By 2008, more than 70 House and Senate members had signed letters to Gates asking him to support funding for cognitive rehabilitation therapy. Then-Sen. Obama led a group of 10 senators urging Tricare to pay for therapy.

They noted that the Pentagon and the VA have improved their efforts to treat brain injury, including increases in the number of doctors and therapists available at facilities.

But the military needed to do more, they said. They wrote that Tricare should cover cognitive rehabilitation so all troops "can benefit from the best brain injury care this country has to offer."

"Given the prevalence of TBI among returning service personnel, it is difficult to comprehend why the military's managed health care plan does not cover the very therapies that give our soldiers the best opportunities to recover and live full and productive lives," the letter said.

A response letter from the Pentagon told the representatives that Tricare officials had not been convinced by available evidence. "The rigor of the research … has not yet met the required standard," wrote Gordon England, then the deputy defense secretary.