Accessibility links
Thrifting Goes Upscale And High-Tech In its search for new revenue, Goodwill Industries has been supplementing its retail stores with high-end boutiques that sell designer donations. It's also selling a lot more of its donated goods online through auction sites. This year, it expects to make about $5 million in online sales. 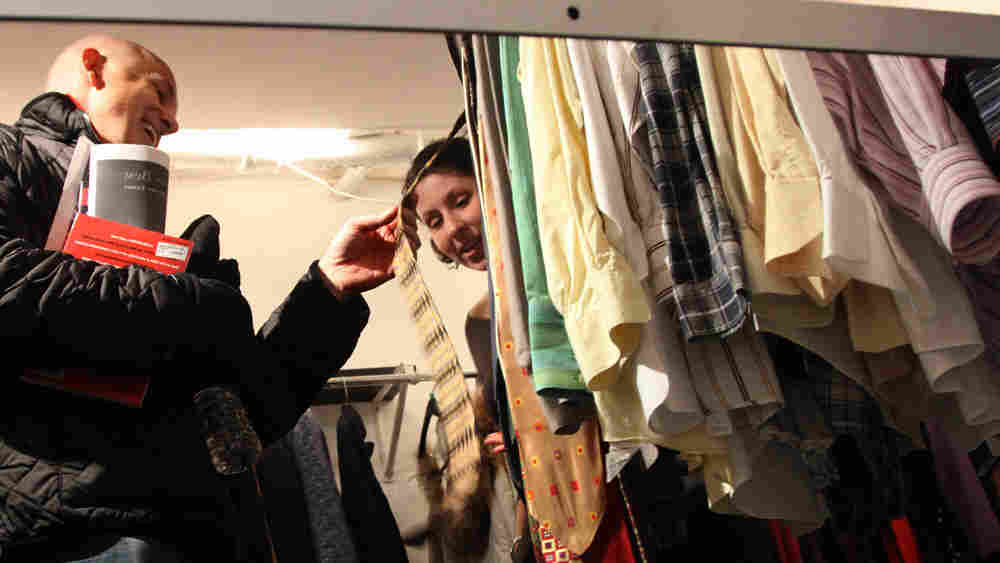 Lisa Tumbarello, a stylist trained by Stacy London from TLC's What Not to Wear, encourages customer Tom Spinelli to buy some ties at a Goodwill trunk show at Caramel, a boutique in Washington, D.C. Abby Verbosky/NPR hide caption 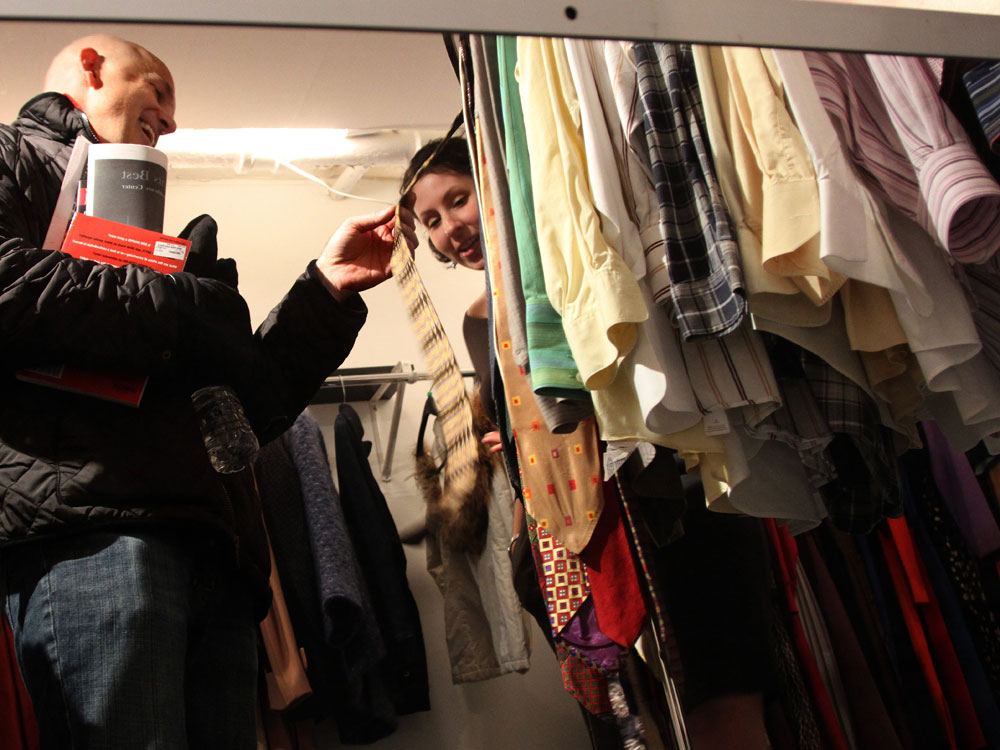 Lisa Tumbarello, a stylist trained by Stacy London from TLC's What Not to Wear, encourages customer Tom Spinelli to buy some ties at a Goodwill trunk show at Caramel, a boutique in Washington, D.C.

Think that designer blouse you're giving away to Goodwill will wind up in a thrift store? Think again. These days, Goodwill Industries, like many nonprofits that are searching for better ways to raise money and broaden their appeal, isn't going the traditional route with some of its designer donations.

Like trunk shows. Goodwill of Greater Washington recently pulled together a selection of its higher-end donations for a one-night sale at a retail store in Washington, D.C.

Professional stylist Lisa Tumbarello was on hand to help customers. There are even refreshments -- sparkling cider and chocolate.

Customer Terry Thomas, who had picked out a velvet-trimmed black coat, was pleasantly surprised as the cashier rung it up. 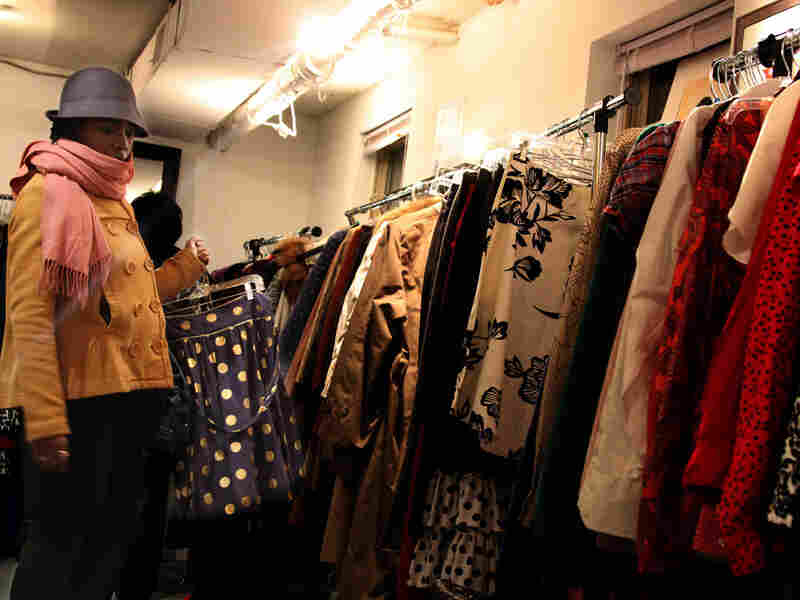 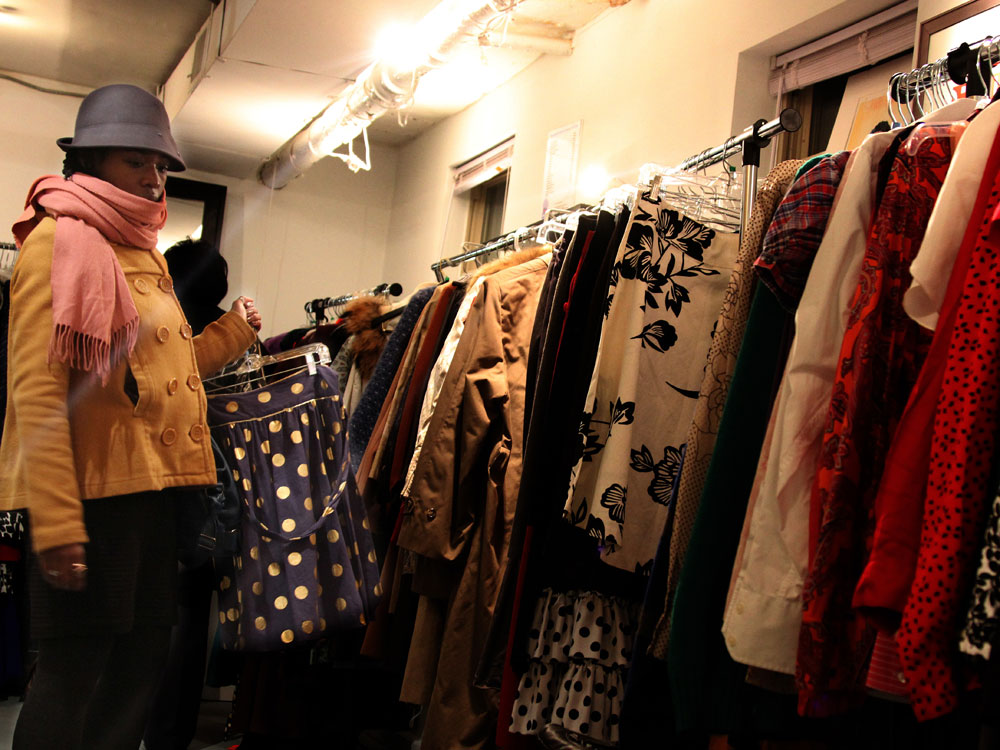 Portia Obeng searches the racks of Goodwill clothes at the trunk show at Caramel.

The nonprofit holds several of these trunk shows each year in the hope of attracting shoppers who might not go to a regular Goodwill store.

"The misperception I think amongst most donors and consumers is that Goodwill's mission is to sell low-cost goods to people in need," says Brendan Hurley, of D.C.'s Goodwill. Hurley says they're really trying to make as much money as they can to provide job training for the disabled and disadvantaged.

"We're always trying to maximize the amount of revenue that we can make off of each sale. A big part of our marketing strategy right now is to educate the public on that, which is one of the reasons why we're really focused on fashion," Hurley says. "We're trying to reach a new and a younger consumer who might look at Goodwill as a realistic fashion option."

And hopefully become a loyal lifetime supporter. D.C. Goodwill has its own fashion blog with tips on great deals, like designer items with the price tags still attached. About two dozen other Goodwills around the country run their own year-round boutiques. More will be opening in the coming year.

And like lots of nonprofits struggling to make ends meet in a bad economy, Goodwill is turning increasingly online. It sells thousands of items on eBay, Amazon and its own auction site, shopgoodwill.com.

Louis Jones, who runs e-commerce for Goodwill of Greater Washington, demonstrates how it works. He picks up a paperback out of a huge bin of donated books at the group's warehouse. It's a Spanish workbook, in pretty good shape. And he thinks it's a good prospect for an online sale.

He scans the barcode of the book, and a national database tells Goodwill it can get at least $1.25 online -- enough to make it worthwhile. Jones says a book like this might sit on the shelf at one of its retail stores for months, but it can be snapped up in days on the Internet -- often at a higher price -- because the market is so much bigger.

This year, Goodwill Industries nationwide expects to make more than $25 million in online sales -- a small but growing source of funds.

And it's not the only charity doing this. Thousands of nonprofits are selling on the Internet. Earlier this year, the San Francisco-based Glide Foundation got $2.6 million by auctioning off a lunch with Warren Buffett. Clam Lorenz with Mission Fish, which runs eBay's charity site, says it's about more than money.

"When you click in, you'll see information about the specific nonprofit that's benefiting from that listing," Lorenz says. "You'll also see more information about what the organization is doing, how they're spending those dollars, and have the ability to click through and learn more about them on their own website."

He says it's about being creative and building long-term relationships with donors.

That's something Goodwill hopes to achieve, even if shoppers at the D.C. trunk show seem a lot more interested in the immediate satisfaction of a getting good deal.

In the audio version of this story — and earlier Web text — we reported that Goodwill Industries nationwide expects to make about $5 million in online sales, The correct number should be "more than $25 million." For Goodwill Industries, that is still a relatively small amount of money, but it represents a growing source of income.