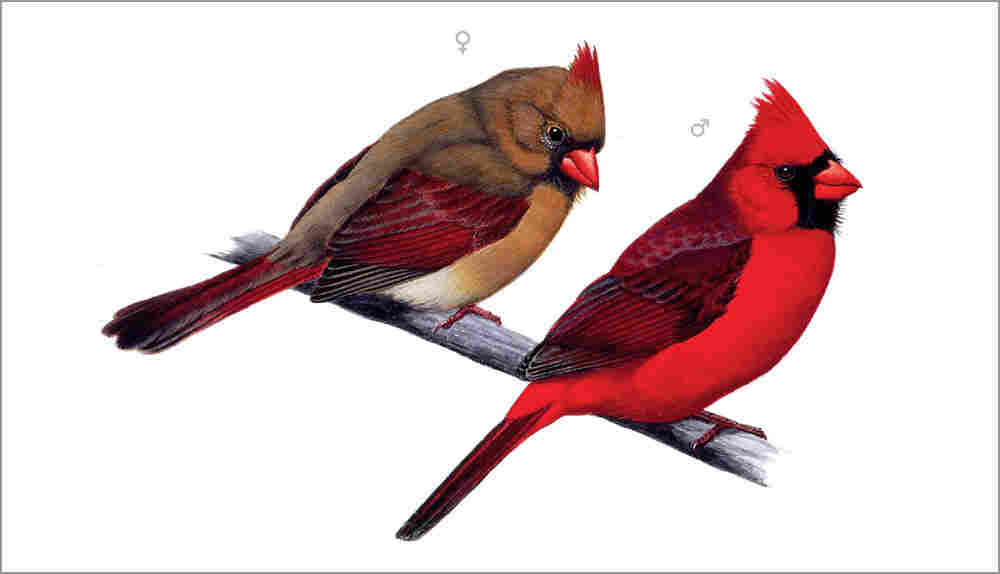 The Northern cardinal is one of the nearly 750 species featured in the Bird Songs Bible. Each entry in the book includes an illustration, and information about the birds' habitat, behavior and song. Readers can hear the birds' calls through the book's built-in audio player. Click To See The Full Entry For The Northern Cardinal Bird Songs Bible hide caption 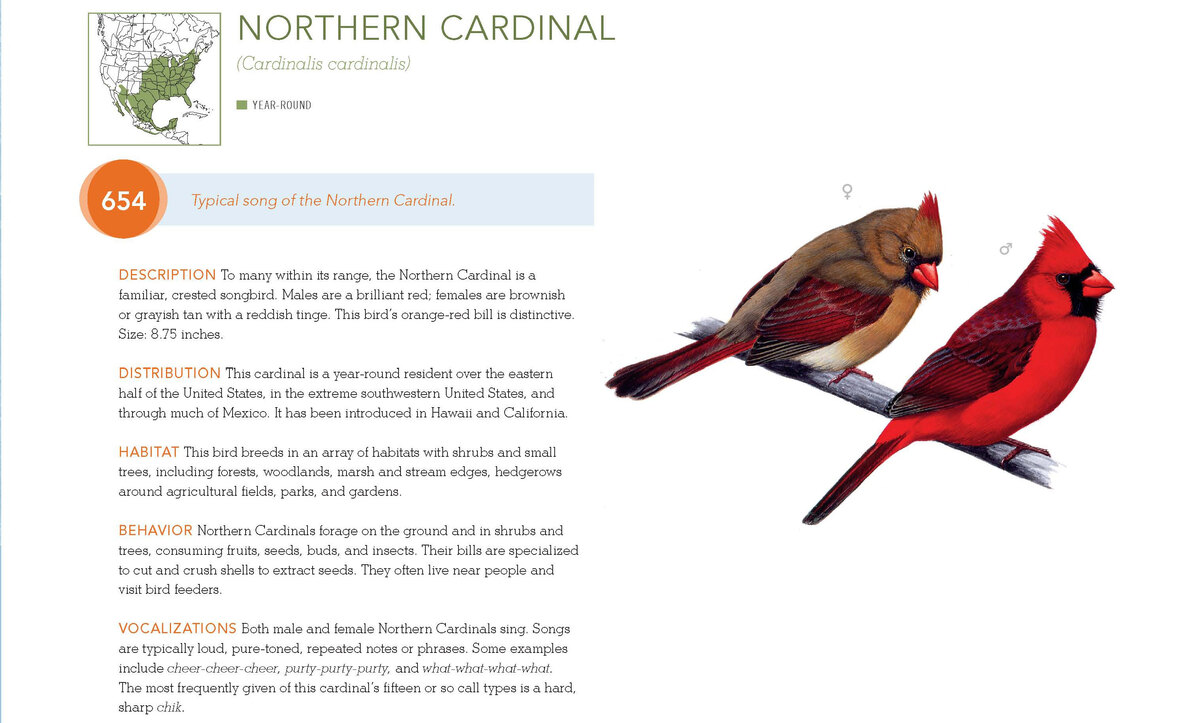 The Northern cardinal is one of the nearly 750 species featured in the Bird Songs Bible. Each entry in the book includes an illustration, and information about the birds' habitat, behavior and song. Readers can hear the birds' calls through the book's built-in audio player. Click To See The Full Entry For The Northern Cardinal 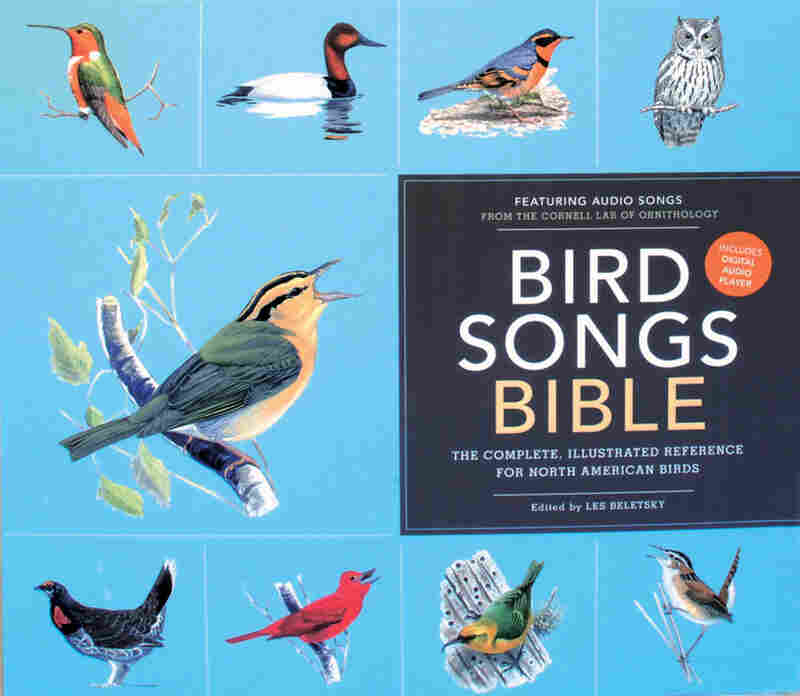 There's a new book out that is unlike any other -- it features characters with names like Hawaii creeper and bufflehead -- and strangest of all: it tweets. And it doesn't tweet in the 21st century, social media sense, but in the good, old-fashioned bird-call sense. The Bird Songs Bible is a massive volume that comes with a built-in audio player featuring hundreds of bird songs.

The 10-pound, $125 tome was edited by bird expert Les Beletsky and features recordings from the Cornell Lab of Ornithology.  It is billed as "The Complete, Illustrated Reference for North American Birds."

"I think 'bible' really says it all," Greg Budney, audio curator at Cornell, tells NPR's Robert Siegel. "It covers over 728 species of North American birds including birds of Hawaii."

Each bird is listed with an illustration, information about its species, and a number. The number corresponds to audio recordings -- the " 'phee-phew' call of the Mississippi Kite" or the " 'cackle' call of the Crested Auklet," for example -- all stored in the book's built-in audio player. 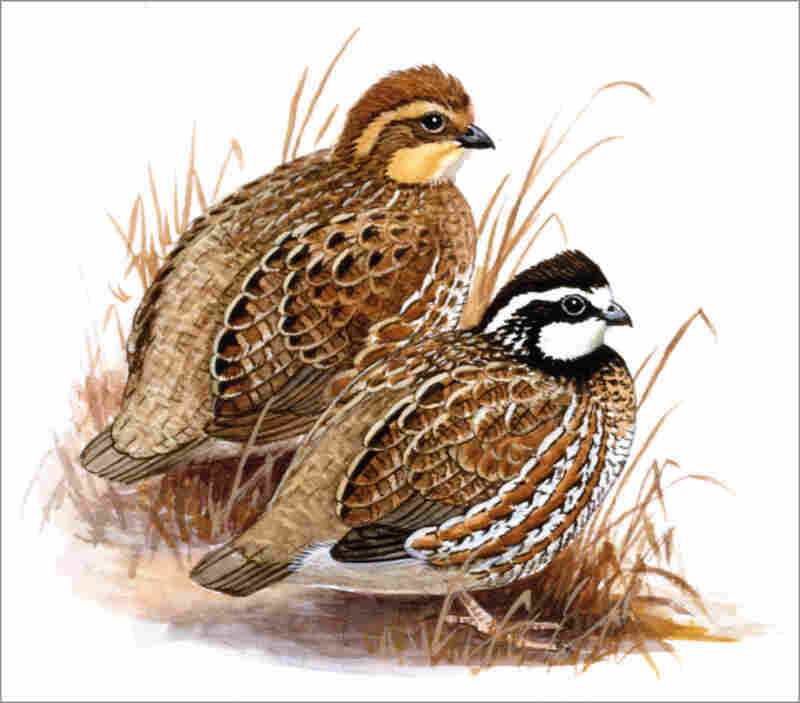 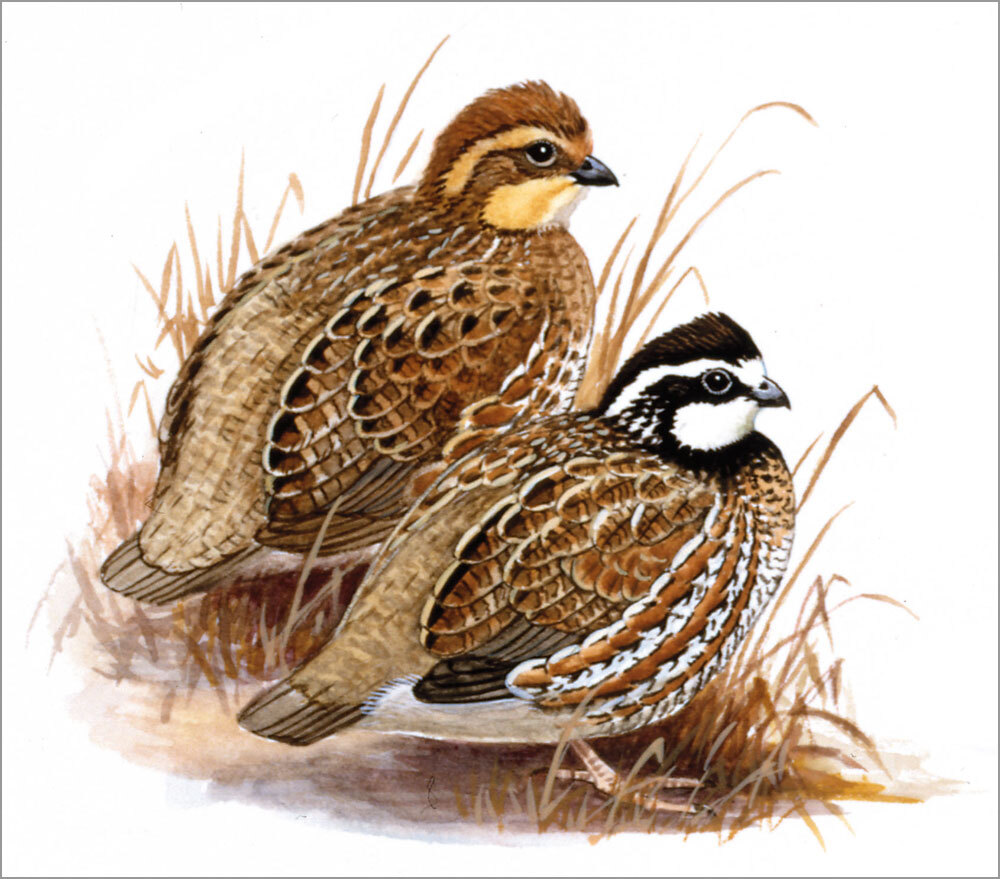 The Cornell recordings are crisp and clear -- Budney says they were made using a portable field recording system and a parabolic microphone -- "a dish not unlike the satellite television dishes that we all are so familiar with today, with an audio microphone mounted in it," Budney describes. (You can see a photo of Budney collecting sound here.)

The book includes hundreds of song recordings, such as the distinctive, whistling call of the Northern bobwhite. Budney says it's a well-adapted sound.

"Clear whistles propagate really, really well in the shrub habitat that bobwhites are found in," he explains.

The call of the Atlantic puffin would lead a listener to believe that the bird has had a spectacularly bad day. "I envision a miniature chain saw," Budney describes. The species has seen its share of bad days on the Atlantic Coast. "It was virtually extirpated from the coast of Maine," Budney says, "but was brought back through the efforts of Audubon biologist Steve Kress. You can now go to some of the islands off the coast of Maine and hear this sound for yourself." 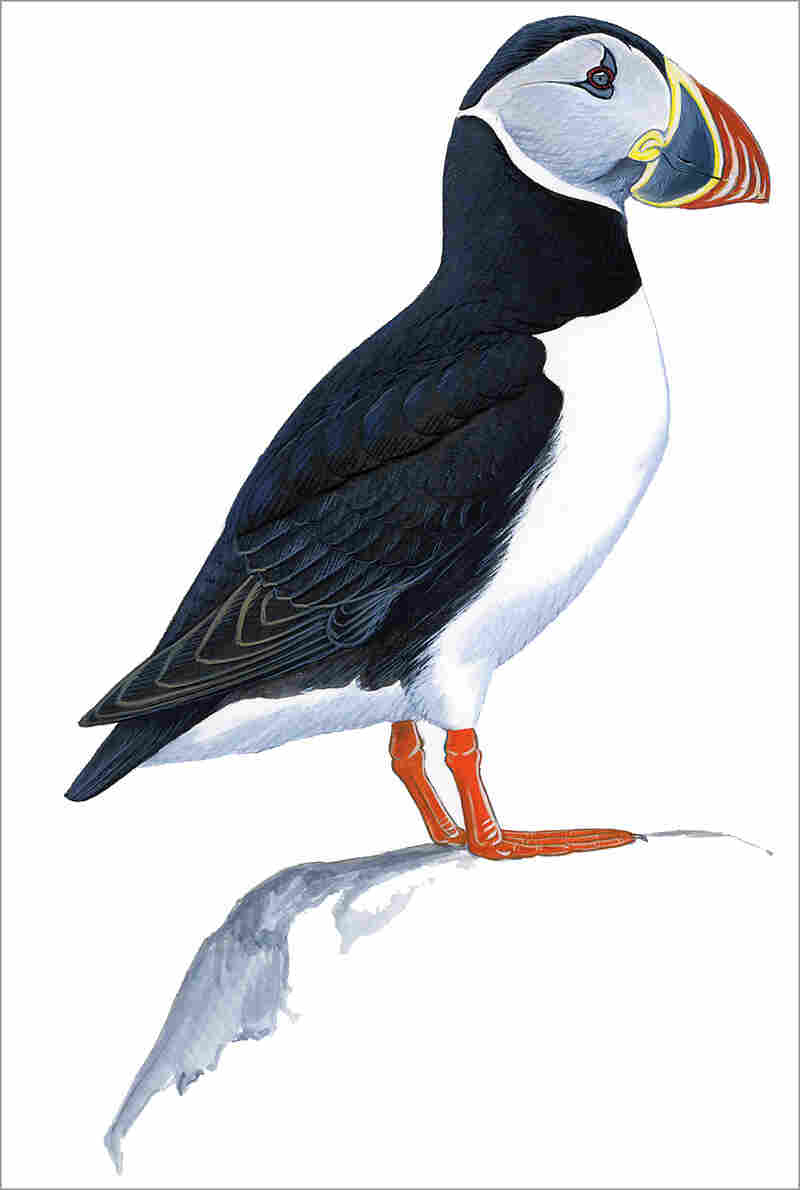 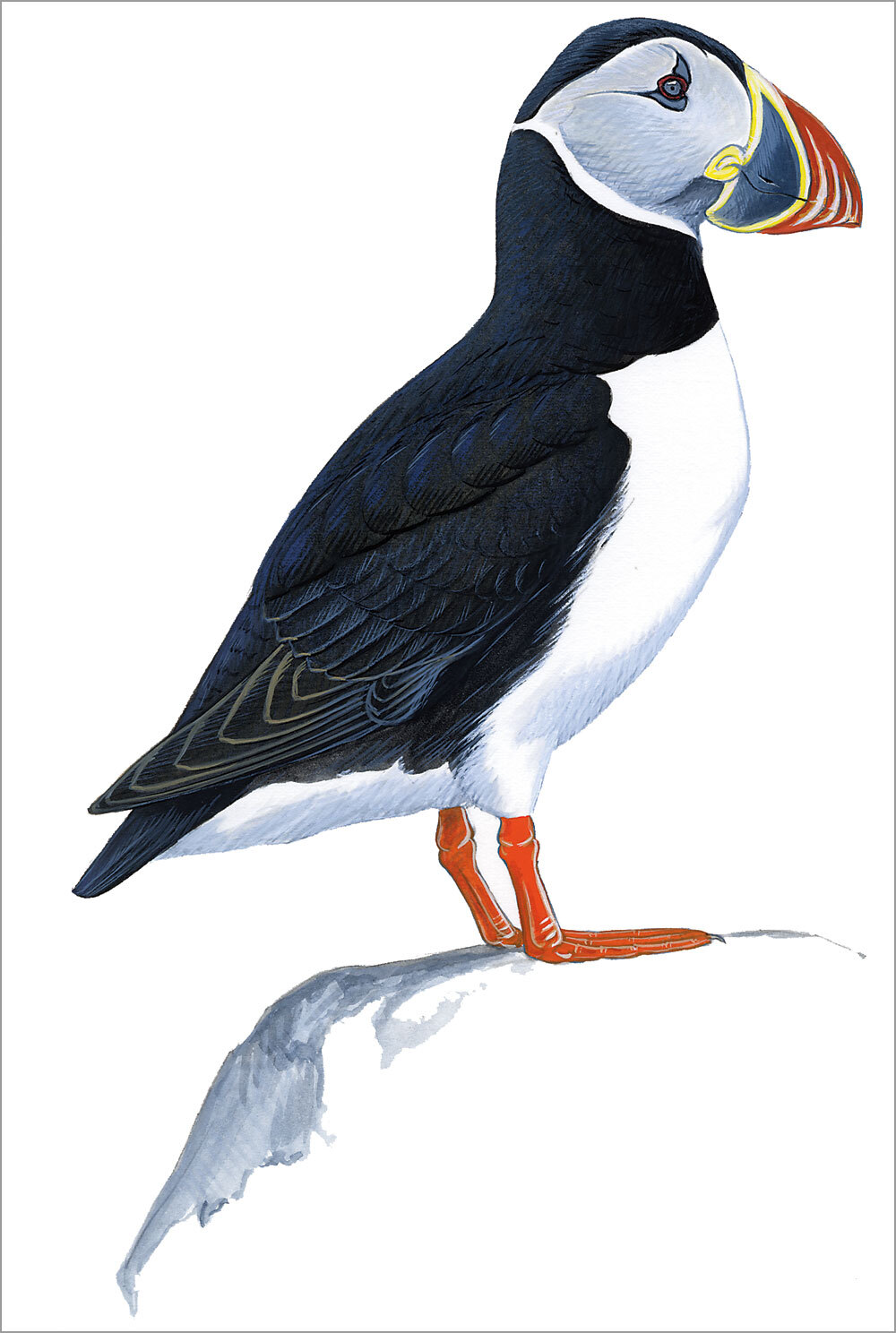 The red-breasted nuthatch is a small songbird that lives in Canada, Alaska and the Northern U.S. Its call isn't pretty -- but it is tenacious.

Though it might be tempting to pull out this comprehensive reference guide while out on bird-watching expeditions, the Bird Songs Bible actually comes with a warning: "Limit playing of the bird calls when you are in birded areas."

That's to prevent local birds from getting confused and territorial, Budney explains. When a bird hears a call from its own species, it may interpret it as another bird intruding upon its territory -- and then will feel the need to defend itself. Just a hazard that comes with owning the Bird Songs Bible -- a book that sounds so much like real life. 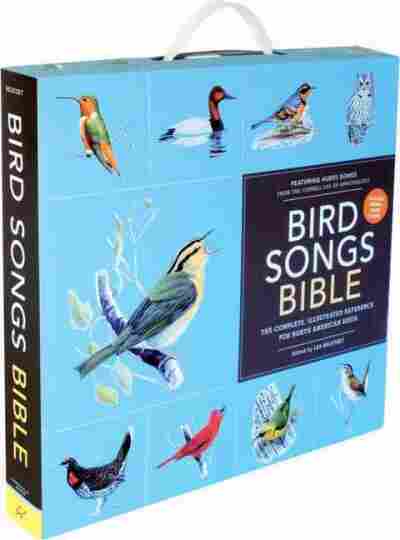