Accessibility links
Kiss Away: Harvesting Mistletoe From The Treetops This time of year, we're used to seeing a sprig of mistletoe hanging from the doorway -- the inevitable invitation to a kiss. But we don't often think about how it got there. One hardy harvester in Tennessee collects it the old-fashioned way -- by climbing to the tops of trees. 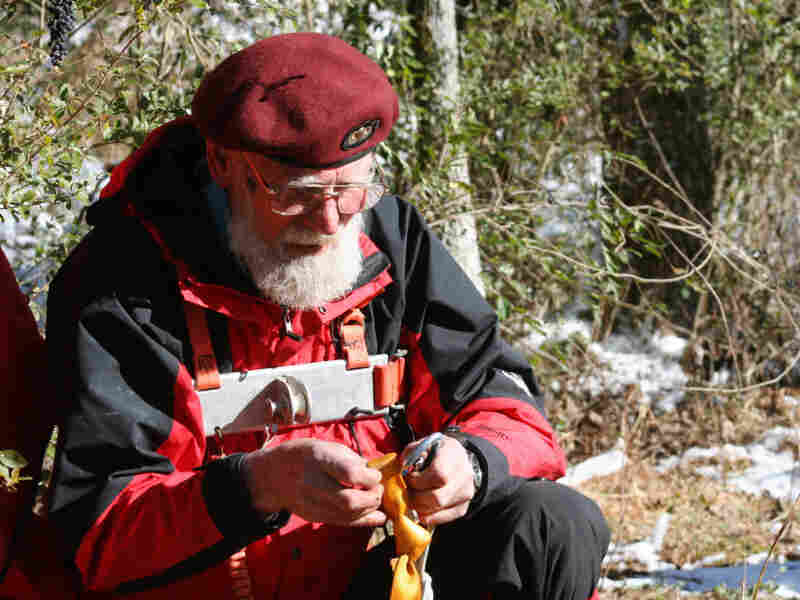 Bill Anderson readies his climbing gear before harvesting a sprig of mistletoe from the top of a tree. Anderson's old-fashioned mistletoe harvesting is steeped in tradition. Matt Shafer Powell/WUOT hide caption 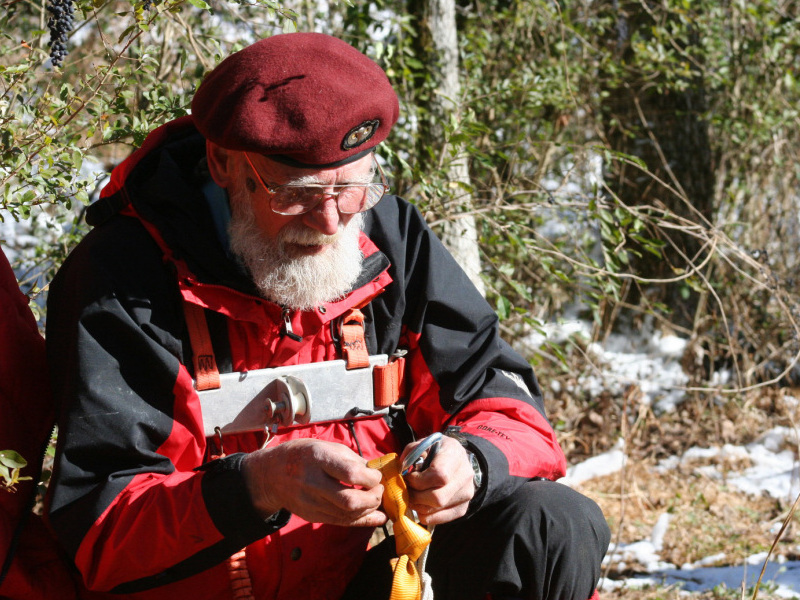 Bill Anderson readies his climbing gear before harvesting a sprig of mistletoe from the top of a tree. Anderson's old-fashioned mistletoe harvesting is steeped in tradition.

This time of year, we're used to seeing a sprig of mistletoe hanging from the doorway -- the inevitable invitation to a kiss. But we don't often think about how it got there.

Yes, there are commercial mistletoe farmers who harvest it, bag it and sell it, but in some areas of the country, amateur harvesters follow ancient methods of retrieving the plant from the tops of trees.

In east Tennessee, one harvester, Bill Anderson, spotted some mistletoe in a leafless maple tree. The tree is down a narrow scratchy path that winds past an old graveyard, across a half-frozen bog and an ice-cold stream.

It looks like someone tossed an evergreen shrub into the tree's highest branches.

"I really can't tell how big it is from here," Anderson says. "It's about two feet across. And I have no idea how high that is." 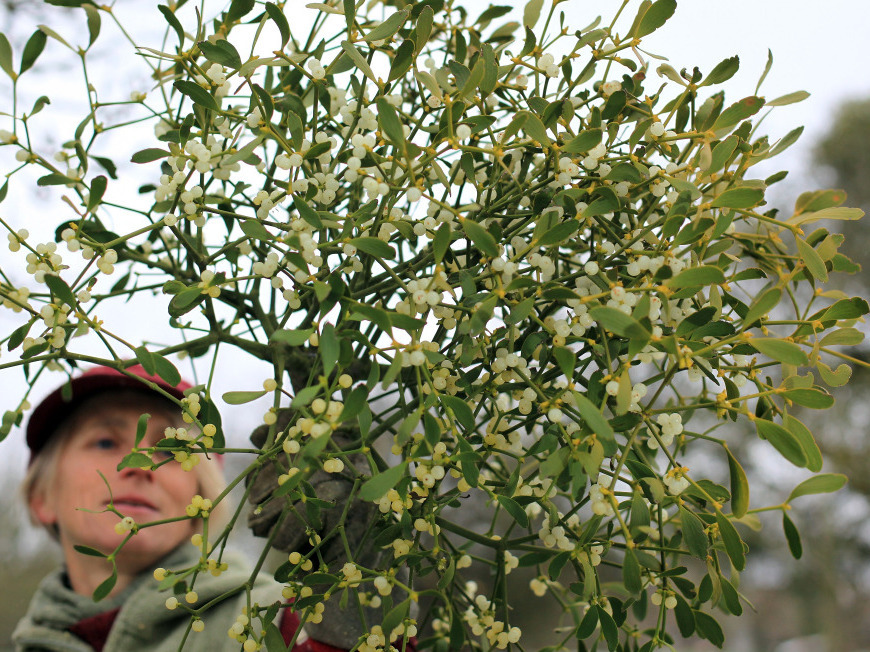 A woman harvests mistletoe in an orchard in Gloucestershire, England, earlier this month.

He settles on around 35 feet, but Anderson can handle it. At 60 years old, he's a seasoned climber with all the proper safety gear. And he likes being up in the trees -- he says it's both challenging and peaceful up there.

That's one reason you won't find him on the ground with a gun, shooting the mistletoe out of the tree. That's how many people harvest it. Anderson laughs, agreeing that the rifle method is easier.

"But it's a little more destructive, unless you're a very good shot with a .22," he says. "You know, you tend to do a lot of damage. It's a little less destructive this way."

That kind of respect for the plant and for centuries of tradition dictates most of what Anderson does here. He doesn't sell the mistletoe -- he'll give some to his friends and his church. He'll also cut it down with a handsaw, tie it to a rope and lower it to a piece of plastic spread out on the ground.

"Traditionally, you never wanted the mistletoe to touch the ground because it would ground out the power," he says. "You know, I don't hold to that entirely, but there are some things you should respect, just because."

A Wintry Mix Without The Mistletoe

Anderson attaches his climbing rope to his harness and basically walks up the tree. Only minutes later, he sways gently among the top branches. He breaks out the handsaw and -- snap!

A few of the smaller pieces of mistletoe do fall to the ground. His friend Jason McNair scrambles to pick them up and set them on the plastic. Then Anderson ties off the big piece and eases it down to McNair.

"This piece has some pretty little white berries on it," McNair says. "Almost translucent.

After rappelling back down the tree, Anderson reaches into a small pouch and pulls out a few uncut gems, some blue corn and tobacco. He'll sprinkle them around the tree -- as a way of saying thanks.

"And like so many things symbolic, this is more for my benefit than it is for the trees," he says. But before heading back to the manic tempo of the holidays, Anderson reaches out and gently pats the tree.