Accessibility links
The King's Singers: Four Decades Of Close, Sweet Harmony Over a 42-year history, the King's Singers have delivered a broad range of repertoire, from barbershop songs to Renaissance madrigals, in sweet, tight harmonies. Hear a concert performance in the APM studios in St. Paul, Minn. 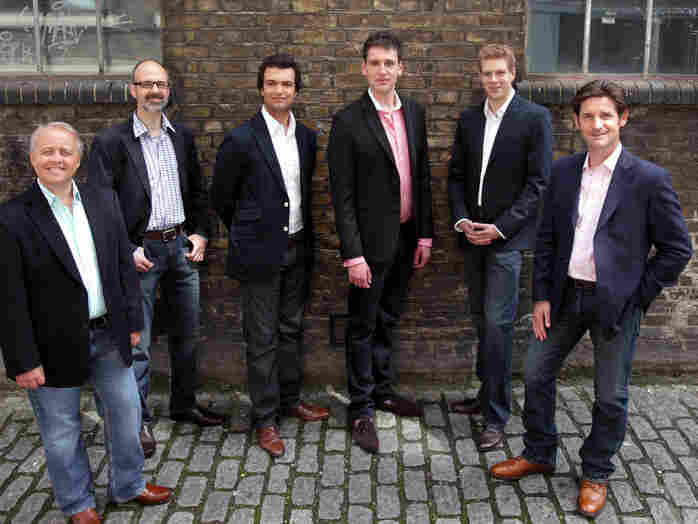 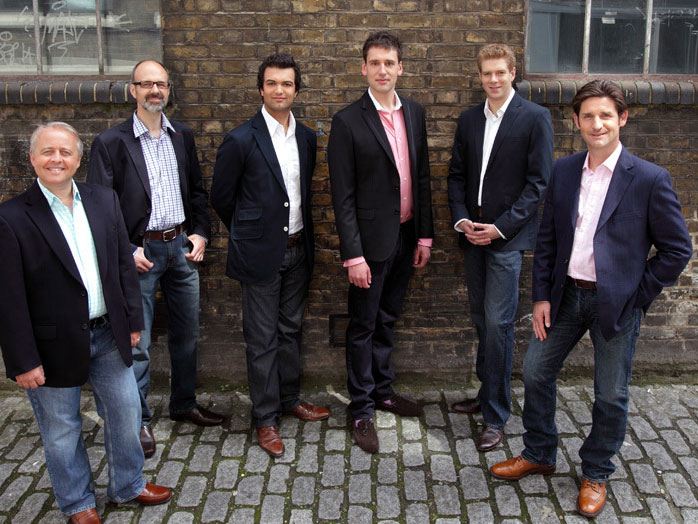 It's nothing new for a vocal ensemble to draw from a wide range of influences.  But few do it with the combination of technical skill and carefree panache of the King's Singers, as you can hear in this concert they gave in our studio.

The group got together in 1965, half a dozen choral singers at King's College in Cambridge, England. They were students of organist and choral director David Willcocks, who instilled the idea of a bright, clear vocal sound -- vibrato only as a color choice, not standard operating procedure. They sang with those lovely straight tones at the college chapel, and soon booked a few local gigs, doing an eclectic mix of music.

Trad: The Water is Wide

Libby Larsen: Will You Nill You

John David: You Are the New Day

At those first performances they went by the catchy name Schola Cantorum Pro Musica Profana in Cantabridgiense. And their eclecticism wasn't so much an artistic choice as an imperative: They didn't know enough of any one kind of music to fill a concert program.  So Renaissance madrigals, English folk songs, jazz arrangements, pop tunes, glee club favorites and barbershop songs all happily tumbled out.

Their unwieldy name soon gave way to the generic Six Choral Scholars of King's College Cambridge. When they landed a big concert at London’s Queen Elizabeth Hall in 1968, they needed something that would fit on the marquee.  The King’s Singers were officially christened.  (The reference is not to any monarch, it’s to their former school.)

They quickly became popular around the UK, even (briefly) had their own TV show.  And what had been a way to fill out concerts became a King’s Singers trademark: They would satisfy classical fans with brilliant performances of 400- year-old sacred music, and tickle pop fans with quirky arrangements of songs by David Bowie and the Beatles.  Johnny Carson took a shine to them; they became regulars on the Tonight Show, solidifying a fan base on the west side of the Atlantic.

Over the years, the King's Singers has always been a male vocal sextet.  No original members are still with the group. Twenty men have been King's Singers over their (official) 42-year history. They have more than 100 albums to their credit, including four released in 2010.

And this studio session on Performance Today shows, the King's Singers formula remains intact. They mix a lively 18th century song with a brand new piece written for them by American composer Libby Larsen (who turns 60 Christmas Eve), plus pops song and a swinging version of Harry Connick Jr.’s "Recipe for Love."

Enjoy the entire performance, or for a two-and-a-half-minute glimpse into their greatness, check out "You Are the New Day," a song written by the now-forgotten '70s Welsh band Airwaves. The original version sounds flat, almost antiseptic. The King's Singers arrangement is supple, subtle, emotionally charged and flat-out gorgeous.