Accessibility links
On The Horizon: Liquid Fuels Made By Sunlight Fossil fuels won't last forever, so scientists and engineers are looking for new and efficient ways to capture solar energy to make liquid fuel. One promising technique relies on a common material most people have never heard of -- the element cerium. 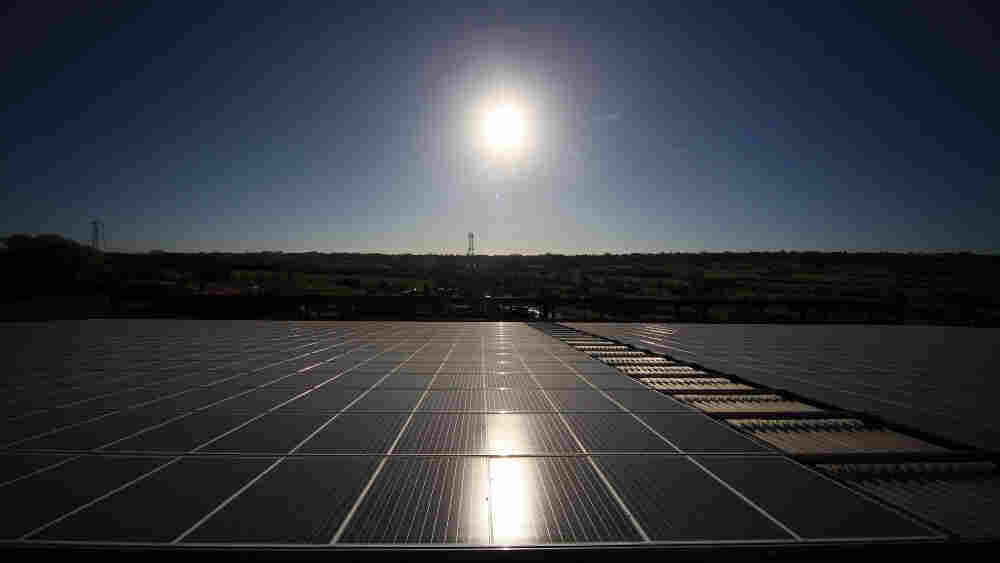 Solar panels like these in England turn energy from the sun into electricity. But researchers are looking to capture the sun's energy to make liquid fuels for cars and trucks, by combining carbon dioxide, water and the chemical element cerium. Matt Cardy/Getty Images hide caption

Sunlight pours a lot of energy onto the surface of the Earth. But one huge challenge is to figure out how to capture that energy and turn it into fuels to power our cars and trucks.

Fossil fuels won't last forever, so scientists and engineers are looking for new and efficient ways to capture solar energy for fuel. One promising technique relies on a common material most people have never heard of: the element cerium.

The ultimate goal is to say, 'How can we take solar photons and convert that into a liquid fuel at higher efficiencies than we know we can do using plants?'

Cerium "is chemically similar to what we call the rare earth metals, but it turns out not actually to be rare," says Sossina Haile, a professor of materials science and chemical engineering at Caltech. It's about as abundant as copper, and is quite useful.

Haile has been experimenting with cerium because, at the right temperature, it can turn carbon dioxide and water into energy-rich fuels.

But there is one hang-up: "The catch is certainly that the temperatures have to be high," she says. Really high -- nearly 3,000 degrees Fahrenheit. Obviously, this process would be utterly useless if you had to use an energy guzzling furnace to make fuels.

A Dent On U.S. Energy Production?

So earlier this year, Haile got together with some colleagues in Switzerland and figured out how to put cerium inside a device that can generate those tremendous temperatures by concentrating solar energy.

And they did it -- they were able to make synthetic fuel from just water and carbon dioxide. As they report in the journal Science, the system wasn't very efficient -- less than 1 percent of the solar energy got converted into fuel. But there is hope.

"If we had a perfect reactor," Haile says, "we should easily get 10 percent efficient."

And because the cerium doesn't get used up in the reaction, it can be used over and over again.

"We went through the big numbers and said, 'Would this make any dent on U.S. energy production?' And the answer is yes," she says.

The trick with any technology, though, is to figure out whether you can develop it in a practical and relatively inexpensive way. A few years ago, the Department of Energy recognized the promise -- and the perils -- of technologies that use solar energy to make liquid fuels rather than electricity, as solar panels do. It established an organization called ARPA-E -- the Advanced Research Projects Agency for Energy.

Eric Toone, a chemist at Duke University, directs an ARPA-E program that supports research on ideas that incorporate biology to accomplish what Haile is trying to do with straight chemistry and engineering.

Plants right now are grown to produce biofuels, like ethanol from corn. But green plants typically convert far less than 1 percent of sunlight into fuel.

To find out, ARPA-E has pumped research dollars into more than a dozen universities and small companies across the country. Most projects are just getting under way, and Toone says it's clearly too early to start picking winners and losers. But he is full of optimism.

"This is absolutely a solvable problem. Realistic time frames? I suspect we are 10 to 15 years away from actual fuels that you can buy at a pump and put into your vehicle," he says. "But I do very, very, very strongly believe that this is going to happen."

Caltech professor Haile says she's not saying her approach is the best, but it is an example of something that could pan out.

"I personally view that the challenges that remain are very surmountable," she says.

The crux here, like all technologies, is that someone needs to invest the considerable time and money to find out what's really going to work. Intriguing ideas, like hers, are just the starting point for innovation.

"This is something that a company would need to be interested to take it forward," she says.