Accessibility links
Shell Pushes Forward To Drill Well In Arctic Shell has spent more than $3.5 billion on federal leases and preparations to drill in the Beaufort and Chukchi seas. Company officials are trying to demonstrate that it can not only drill responsibly, but also clean up an oil spill if something goes wrong. But environmental groups say it's not worth the risk. 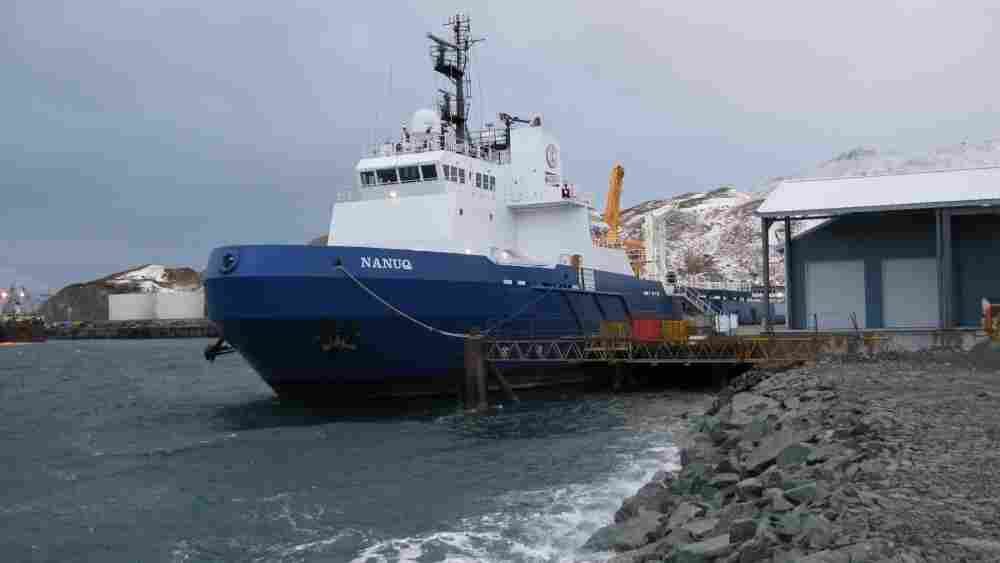 Shell's Nanuq was built especially for oil spill response cleanup in the Arctic Ocean. It can store 12,000 barrels of recovered oil. The 300-foot vessel is docked at Dutch Harbor, Alaska, for the winter. Jeff Brady/NPR hide caption 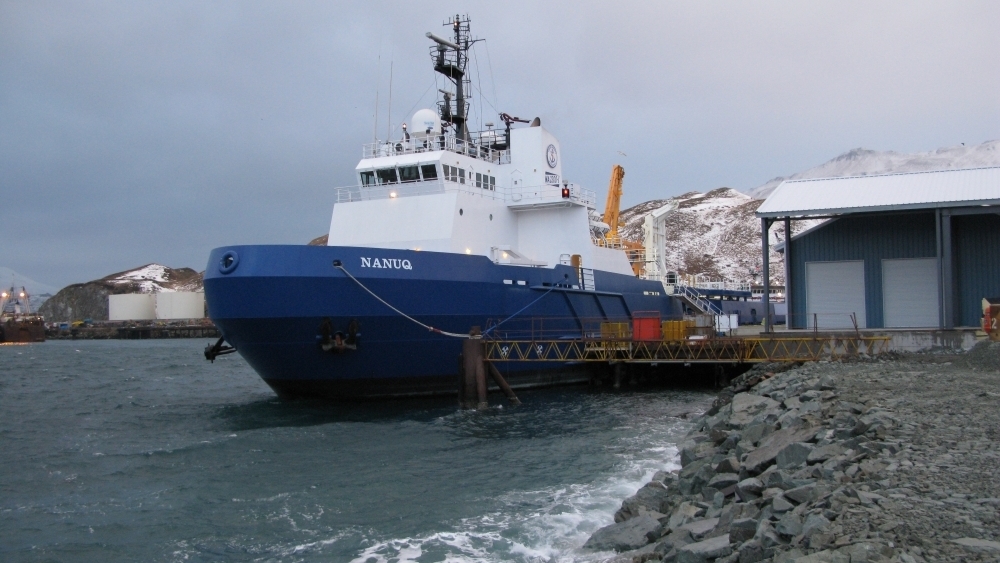 Shell's Nanuq was built especially for oil spill response cleanup in the Arctic Ocean. It can store 12,000 barrels of recovered oil. The 300-foot vessel is docked at Dutch Harbor, Alaska, for the winter.

The Deepwater Horizon accident last April put a halt to offshore drilling -- not just in the Gulf of Mexico but in Alaska, too. Despite that, Shell is pushing ahead with plans to drill an exploratory well in the Arctic Ocean, in the Beaufort Sea off the north coast of Alaska.

The company has spent more than $3.5 billion on federal leases and preparations to drill in the Beaufort and Chukchi seas. So far, that investment hasn't returned a single dollar.

Lawsuits by environmental groups and Alaska native communities forced the company to scale back drilling plans in the Chukchi. Now, Shell is focused on an exploratory well in the Beaufort. The company hopes to drill this summer after the ice clears.

How It Would Respond To A Spill

Shell officials hope to demonstrate that the company is prepared to drill responsibly and it's ready to clean up an oil spill if something goes wrong.

Near the end of the Aleutian Island chain is Dutch Harbor and the city of Unalaska. Shell is storing equipment there over the winter, including the 300-foot cleanup vessel Nanuq.

The Nanuq can store 12,000 barrels of recovered oil and there are tools on board to collect crude from water. Merrell points to one that looks like a very thick feather boa.

"[It's] what we call a fox-tail skimmer and it's connected to a roller and a squeegee system," he says. "They're very effective at removing pockets of oil in and amongst ice flows."

There's also a huge roll of containment boom and another oil skimmer nearby. Merrell says the Nanuq could respond to a spill within an hour. And if it became necessary to drill a relief well, a second drilling rig would be standing by to do it.

Shell has a good safety record, but the Deepwater Horizon memory is still fresh, and environmental groups oppose the company's drilling plan.

"Our position is that right now we are not ready to drill in the Arctic Ocean," says Lois Epstein, Arctic program director for The Wilderness Society.

Epstein says more scientific research needs to be done in the Arctic before companies should be allowed to drill there. 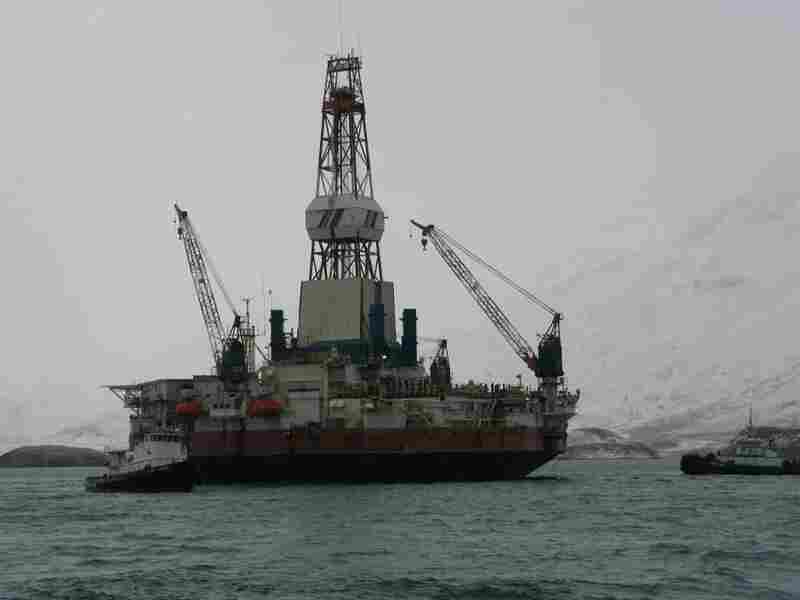 Drilling rig Kulluk is specially built to work in the Arctic Ocean. Its round shape deflects ice floating in the water. If Shell is allowed to drill in the Beaufort Sea this summer, the Kulluk would be placed on standby to drill a relief well in case of a well blowout. Jeff Brady/NPR hide caption 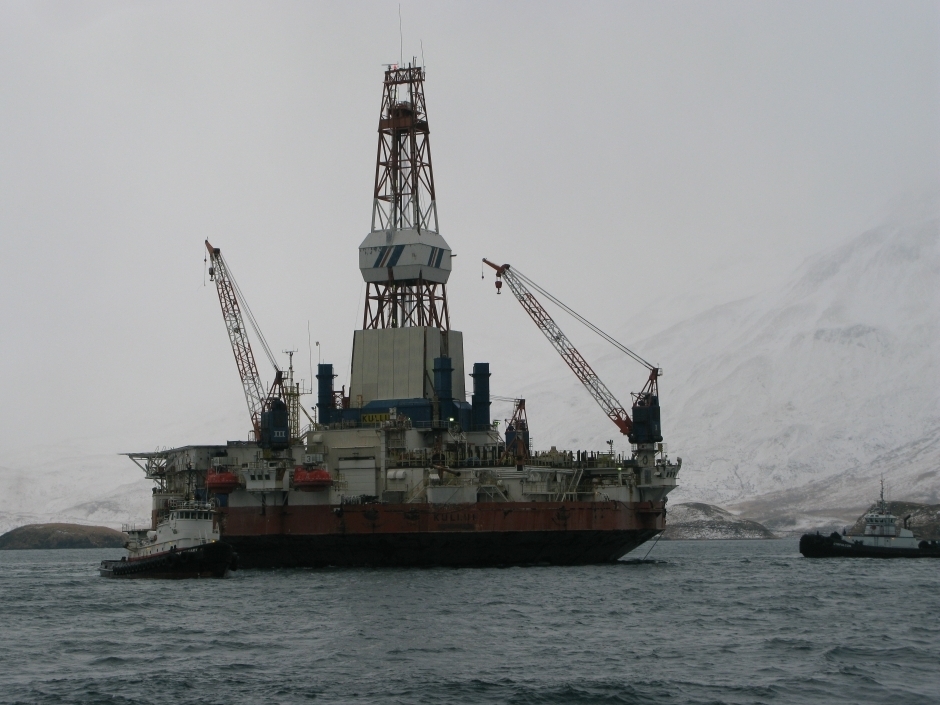 Drilling rig Kulluk is specially built to work in the Arctic Ocean. Its round shape deflects ice floating in the water. If Shell is allowed to drill in the Beaufort Sea this summer, the Kulluk would be placed on standby to drill a relief well in case of a well blowout.

"We don't even know what animals are in the Chukchi and Beaufort seas in total, let alone how they interact and what they eat and at what times of year," says Michael LeVine, Pacific senior counsel for Oceana.

While 2,700 scientists around the world recently finished a decade-long Census of Marine Life, researchers admit there's still much to be learned about the Arctic Ocean.

When it came to oil and gas drilling, environmental groups felt ignored during George W. Bush's administration. The Obama White House appears to take their concerns more seriously, especially in the wake of the Deepwater Horizon accident. With indications that this administration is slowing down what had been an aggressive federal leasing program, environmental groups are asking big questions about the future of offshore drilling in Alaska.

"You might be able to run out and drill a well, or two wells, or three wells without having what happened in the Gulf of Mexico happen in the Arctic," LeVine says. "But is that a risk that you want to take?"

"We really need to decide, as a country, how important it is to get this oil," Epstein says. "We are not in an emergency situation where if we don't get this oil all of a sudden factories are going to have to shut down."

One Well Versus Hundreds Of Wells

Much of the concern from environmental groups appears to be less about the one well Shell wants to drill this summer, and more about what could happen if the company finds oil. If a production program were launched, that could mean hundreds of wells drilled in an area that is now mostly pristine.

You might be able to run out and drill a well, or two wells, or three wells without having what happened in the Gulf of Mexico happen in the Arctic. But is that a risk that you want to take?

Slaiby says Shell has plenty of experience working in the Arctic. The company started drilling in the Beaufort and the Chukchi seas in the 1960s. And he says the industry learned important lessons from the Deepwater Horizon accident about containing well blowouts and spills that could be applied to work in the Arctic.

While the exploratory well Shell wants to drill in the Beaufort next summer is similar to BP's Macondo well, Slaiby says, there are key differences.

"These wells have very, very different risk profiles," he says. "They're in shallow water pressure -- a third of what we see in deep-water Gulf of Mexico."

And you can be sure, Slaiby says, the first well drilled is going to be under a lot of scrutiny. That's a point echoed by Michael Bromwich, the director of the Bureau of Ocean Energy Management, Regulation and Enforcement (BOEMRE), the country's top offshore drilling regulator.

"We don't have a lot of activity in the Arctic," Bromwich says. "And so we are able to, even with limited manpower, make sure that we will be providing 24/7 regulatory oversight over the drilling of this well if we make the decision to approve the application."

Shell hopes to hear soon whether BOEMRE will approve its request for a drilling permit. The company says it needs time to prepare if it's going to drill this summer, though it hasn't set a hard deadline.

Bromwich says his agency feels no pressure to conduct its work faster in order to meet Shell's timeline.

'Our Whales Were Skittish'

Some of the native communities on the North Slope who hunt whales for food also oppose Shell's offshore drilling plan.

"In the past, when we've had a lot of activity, our whales were skittish," says Dora Leavitt from the village of Nuiqsut. "Our whalers were having to go 30 miles until they spotted just one whale."

That can be dangerous in the 20-foot boats Leavitt says are used for hunting. This issue is especially important for Leavitt because her 14-year-old son is among those going out in the boats to learn how to hunt whales.

"Now my 10-year-old, it's time for him to go and learn," says Leavitt. "I'm concerned for them because they're going to be going out with their dad and I want them to be safe."

Shell says it is working to address concerns of North Slope residents and the company has created programs to boost local economies.

Recently, Shell flew Leavitt and other North Slope leaders down to Dutch Harbor to see the company's equipment. As they were leaving for the bumpy plane ride back home, several of the visitors said they still oppose offshore drilling near their communities. But they hope the increased drilling will lead to good-paying jobs for their residents.