Accessibility links
A Christmastime Walk 'Through The Snow' Propelled by strummed guitars, quietly brushed drums and dulcet chimes, The Winston Jazz Routine's "Through the Snow" provides a ready-made soundtrack to a stroll through snowy landscapes. Nathan Phillips' hushed vocals are well-suited for year-end introspection.

'Through the Snow' by The Winston Jazz Routine

A Christmastime Walk 'Through The Snow'

A Christmastime Walk 'Through The Snow'

'Through the Snow' by The Winston Jazz Routine 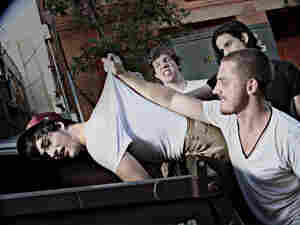 Very little is jazzy or routine about The Winston Jazz Routine: The band operates like many other modern indie-pop ensembles, with an array of musician-friends contributing under the leadership of a single songwriter. In this case, it's Nathan Phillips, a Nashville-based singer with a knack for capturing passing moments.

Propelled by strummed guitars, quietly brushed drums and dulcet chimes, "Through the Snow" provides a ready-made soundtrack to a stroll through snowy landscapes. Phillips' hushed vocals are well-suited for year-end introspection: "'Merry Christmas,' we said to each other / I've got a brother and sister / With each other, we walk through the snow," he sings sweetly. Snippets of the melody, meanwhile, reveal themselves to offer a clever variation on a well-known Christmas carol. And just when the song seems to have run its course, a tease of the song flitting at the edges appears and fades out, just out of reach.

"Through the Snow" can be found on Peace on Earth: A Charity Holiday Album, a compilation curated by music blogger Caleb Palma. The musicians donated all songs found on the album, and 100 percent of the proceeds go to benefit Toys for Tots. Peace on Earth and its sequel are available as digital downloads at hardtofindafriend.com.