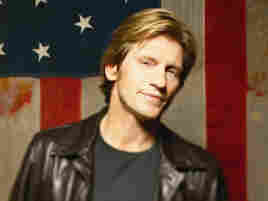 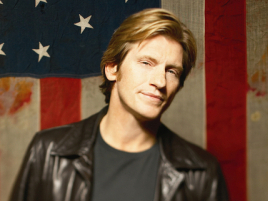 Comedian Denis Leary plays our game called "Can you tell me how to get ... uh ... how to get to Sesame Street?" Three questions about the beloved kids show taken from the book Street Gang by Michael Davis.

Next up, comedian, actor and creator of the FX TV Show "Rescue Me."

Denis Leary joined us - along with Adam Felber, Mo Rocca and Kyrie O'Connor - back in December 2008, right after he wrote his self-help book "Why We Suck," a subject of some interest to us.

M: Yeah, it's a little trip through - it talks about why we're great, and then all of the things that we need, I think, a little touch-up on.

M: Apparently, that's just lost on most of the population in this country.

M: Most of the people that are wearing them look like they jumped out of a 15-story window and landed in the jeans.

M: And then never took the jeans off.

M: Meanwhile, the skinny people are wearing the hip-hop baggy jeans with the underwear showing.

M: So all we got to do is really flip that. You know what I mean?

SAGAL: Are you worried that you've become one of those guys - like, kids these days, what's wrong with them?

SAGAL: You're totally that guy.

M: I give that speech all the time.

M: There's plasma televisions, Playstations. We go to their rooms when they do something wrong.

M: You stay down here, where the books are. We're going up there.

SAGAL: Here's the thing: I mean, I imagine - my experience is that most comedians, anyway, had childhoods - they were shy, they were a little lonely, they found out that being funny could maybe get them some friends. They went that way. That wasn't really your...

M: Really? You think most comedians are...

SAGAL: Yeah, that's been my experience.

M: I thought most of us, at some level, were repressed by religious figures in an organized religion.

M: Yeah. I mean, every guy I know - Chris Rock, Jon Stewart - we all - Jon Stewart was in Hebrew school. I was in Catholic school. It's basically the same idea: Don't laugh at any of this. That's what they would tell you.

M: And that's why I love organized religion because they always want you to not laugh and in the back of the room, we're all going pfft, you know.

M: If they had used reverse psychology, I wouldn't be here right now.

SAGAL: Denis, do anything you want, it's cool, it's fine.

SAGAL: One of the things I ended up really liking about your book were the characters of your parents. Not characters, but real people.

SAGAL: And I loved how they encouraged you to be all that you could be within limits.

M: So it was a major blow to me at the time. And then I realized, as I got older, that he was trying to explain that you could be almost, almost anything.

M: But president was a little bit out of reach. So, you know, it was a self-esteem thing that was true, because I couldn't have been the president. First of all, I didn't pay attention in school at all, which didn't help, you know, at all.

M: No. I really kind of - I just chopped my own feet off from the presidential race.

M: Because the current...

M: You wouldn't want me as president. I love these people who say, you know, I like Sarah Palin because she's so much like us. I don't want somebody like us running the country, OK?

M: I think most of us suck, and I'm one of those people that sucks. I want somebody really smart running the country, all right?

SAGAL: Well, Denis Leary, we're delighted to have you with us. We have invited you here this week to play a game we are calling...

KASELL: "Can You Tell Me How To Get, How To Get to Sesame Street?"

SAGAL: The generation of men and women now running the world were shaped by, more than anything, the TV show "Sesame Street." I'm sure you watched it as a kid.

SAGAL: That's the thing; you're too old.

SAGAL: That's why you're so bitter and mean, because you didn't have...

SAGAL: So we're going to ask you three questions about that landmark kids' show.

SAGAL: Get two of these questions right, you win our prize for one of our listeners, Carl Kasell on their home answering machine, singing his theme song, "It's Not Easy Being Avuncular."

SAGAL: Carl, who is Denis Leary playing for?

KASELL: Denis is playing for Edith Lees(ph) from Omaha, Nebraska.

SAGAL: All right. First question, as I'm sure you remember, or maybe you don't, "Sesame Street" was known for introducing kids to real-world concepts in a gentle way.

SAGAL: One of the notable early examples was an episode in which one of these things happened. Was it A, Mr. Hooper's grocery store was vandalized; B, folk singer Buffy Sainte-Marie breastfed her baby right in front of Big Bird...

SAGAL: Or C, special guest star Elizabeth Taylor explained to Grover why she had had four different husbands?

SAGAL: You're going to go with A?

SAGAL: It was Buffy Sainte-Marie.

SAGAL: Yeah, she really was. She was a guest on the show for the first five seasons.

SAGAL: They went through her pregnancy and the birth of her baby - off-screen I hope. And so she breastfed him on camera. And Big Bird asked about it and eventually said: You know, that's nice, quote, said Big Bird.

M: I can't believe Big Bird was OK with it.

SAGAL: OK, here's your next question. The show, of course, was for kids but produced, of course, by adults, who off-camera acted like adults. At one of the season wrap parties, the puppeteers introduced what new character, just for their own entertainment? Was it A, Ally the Alcoholic...

SAGAL: B, Big Butt; Or C, the Nookie Monster?

M: I really got screwed on this quiz.

SAGAL: So it's a wrap party. You know what they're like.

SAGAL: You're familiar with them. They got a puppet...

SAGAL: Well done, sir. All right, last question. Many foreign television companies bought the rights to show the series in their own countries. But the head of children's programming for the BBC, back in the late '60s, turned it down. Why? Was it because A, she thought the way the show insisted on right answers to questions was quote, authoritarian indoctrination; was it B, she noted that many of the Muppets were naked and therefore, immodest...

SAGAL: Or C, she felt that it was another attempt to create American cultural dominance of the English-speaking world?

M: I am going to go with the nudity.

SAGAL: You're going to go with the nudity. She said all the Muppets were naked. She's like this is...

M: They don't know, either.

M: OK. Let me float another one.

M: What do you think of the authoritarian?

M: All right, you want C then, is that what you want?

M: All right, I'm going with you. We will sink or swim together.

SAGAL: I applaud your solidarity, but you're all wrong. It was A.

SAGAL: It was A, authoritarian. She thought it was authoritarian the way they answered the questions correctly.

SAGAL: You know this, Mo?

M: You know what, let's boo them until they give us the right answer.

M: That's awfully authoritarian of you.

M: At least we were together, right?

M: You would have been wrong without them.

SAGAL: Carl, how did Denis Leary do on our quiz?

KASELL: Well, Denis needed two correct answers to win for Edith Lees, but he had just one.

SAGAL: Oh. Denis Leary is a comedian and the starring co-creator of "Rescue Me" on the FX Network. He's also the author of the new book, "Why We Suck." Denis Leary, thank you so much for joining us.

M: Oh thanks guys, thank you.