Accessibility links
Small Beetles Massacre The Rockies' Whitebark Pines What were lush forests only a few years ago are now eerie stands of red and gray snags. Warmer temperatures have allowed voracious mountain pine beetles to thrive — and ravage the Northern Rockies' whitebark forests. And that threatens other organisms in the ecosystem, too. 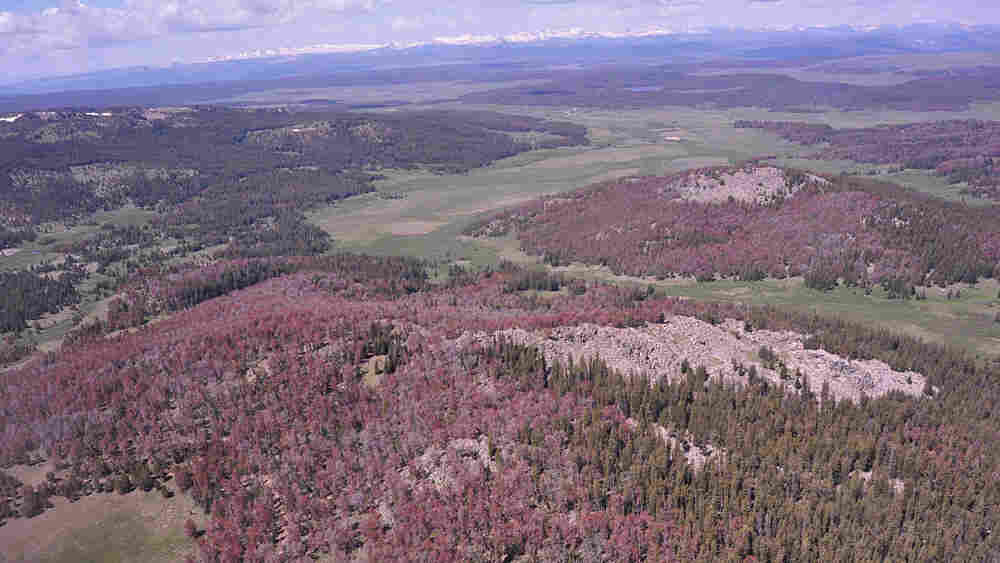 The Whitebark pine trees in the high-elevation areas of America's Northern Rockies have stood for centuries. But these formerly lush evergreen forests are disappearing at an alarmingly fast rate; what remains are eerie stands of red and gray snags.

Warmer climates have sparked an outbreak of a voracious mountain pine beetle that is having devastating consequences for whitebarks and the wildlife that depend on them.

If you want to see how quickly tiny mountain pine beetles are devouring Yellowstone's majestic whitebark forests, you have to ski uphill -- way uphill. The trees only grow at altitudes higher than 8,500 feet above sea level.

As entomologist Jesse Logan looks up at snow-covered slopes speckled with skeletons of dead trees, he says the massacre is happening faster than even he expected. More than a decade ago, Logan predicted that with global warming, these tiny, ravenous beetles would start to thrive here. At the time, other insect experts were skeptical. But in recent years, winter cold snaps haven't been nearly as brutal as usual.

"It's the sort of time in your life that you hope to hell you're absolutely dead wrong, and it comes to be that you weren't right enough," Logan says. "And now I wonder if my grandchild will ever have the experience of being in white bark."

After hours of climbing, Logan stops at a 40-foot pine tree that looks as if it has a bad case of pimples.

"Each one of these is a point of attack by a pair of mountain pine beetles," he says. "This is a dead tree, even though it's green."

He pulls out a tiny ax and starts to chip away the bark. It peels away easily.

"It's loaded with both adults and larvae," he explains. "So if we take a look, you see these little translucent guys."

Those are immature beetles that will grow up and attack other trees. But it's not just mild winters that help the beetles multiply like crazy. Warmer summers mean the bugs are completing entire life cycles in one season.

"It's not that we just happened to come across a tree that had been hit," says geographer Wally Macfarlane, who is in the tree well with Logan, thigh deep in snow.

Macfarlane saw just how voracious those beetles are during 10 flights in a small plane over the Northern Rockies. On most of the region's high peaks, he saw large swaths of trees -- the wrong color.

"As you look down at them -- instead of green, you see red," Macfarlane says. 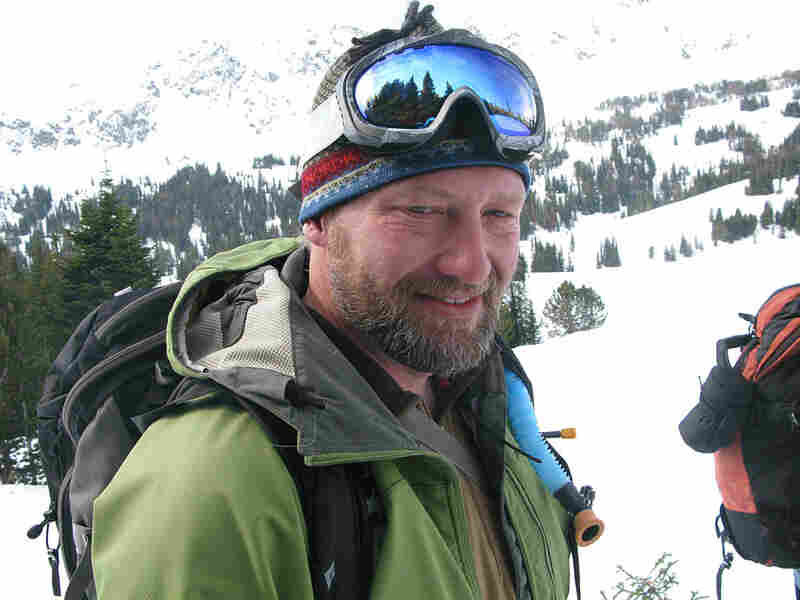 Geographer Wally Macfarlane says beetles have killed most of the trees in about half of the watersheds in the Yellowstone region. Elizabeth Shogren/NPR hide caption 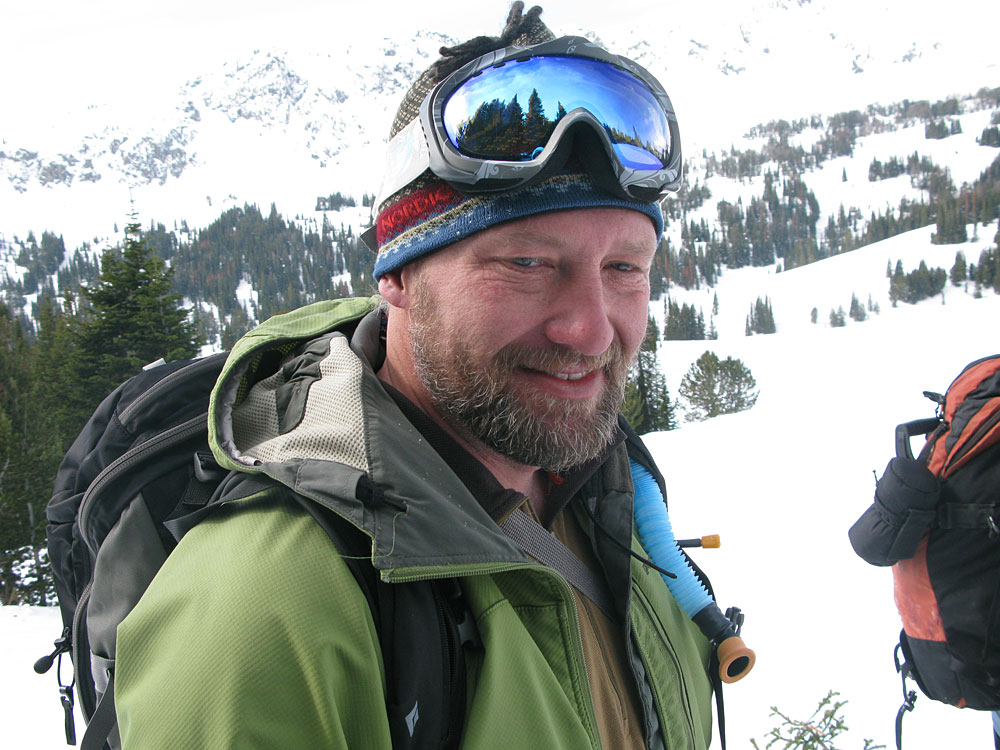 Geographer Wally Macfarlane says beetles have killed most of the trees in about half of the watersheds in the Yellowstone region.

When whitebarks die, they turn red first. Then, when the needles fall off, they turn gray. He says that in just a few years, beetles have ravaged more than half of the region's whitebark forests.

Their toll includes beloved landscapes in the Grand Tetons and Yellowstone -- and crucial feeding grounds for one of America's most charismatic animals: grizzlies.

In a nearby stand of whitebark, the woodpeckers are busy with all the dead trees. But for other wildlife, the fast die-off is life-changing -- especially for grizzly bears. If this were early autumn, they would be keeping us company up on this steep slope.

Before Yellowstone grizzlies hibernate, they gobble up as many cones as they can to get the nutritious seeds inside.

"They're just like pine nuts. Bears love them," Craighead says.

Biologists know what happens when grizzlies don't get their favorite fall treat: They produce fewer cubs, and they spend more time at the lower elevations.

"Before long, they'll come up and there won't be any whitebark pine. And then they've got to find something else," Craighead says.

When I ask him where the bears will go, he jokes, "They'll go down to Cooke City and try to get a burger at a Miner bar -- well, maybe the dumpster."

And then he adds in a serious tone: "A lot of them will probably go down near people and get into trouble."

It's the sort of time in your life when you hope to hell you're absolutely dead wrong, and it comes to be that you weren't right enough.

Craighead says the threat to the bears is so great that the government should protect them as much as possible. For decades, Yellowstone grizzlies were on the endangered species list. Three years ago, the federal Fish and Wildlife Service declared them recovered and removed them from the list. Last year, a federal judge ordered them back on because of concerns about global warming and the loss of whitebark pine cones.

But not everyone is so gloomy about the bears' prospects. U.S. Geological Survey biologist Chuck Schwartz, who heads the federal government's multiagency grizzly study team, thinks grizzlies probably will be OK, even without pine cones.

"They're very adaptable at what they eat. In years without whitebark, grizzly bears eat a lot more root crops and a lot more meat," Schwartz says.

And, Schwartz says, it's also too early to give up on whitebarks completely, because the beetles don't attack the young trees.

Logan, the entomologist, argues that young trees can't do what the mature trees do. Not only do their seeds feed animals,  but older trees also have broad canopies that shade the snow so it stays around longer. That makes streams cool enough for trout, and it keeps the rivers flowing.

"So they're tremendously important for things we value, like wildlife and, of course, water," he says.

So what can be done to prevent the whitebarks from dying?

"There's not any silver bullet or like a pesticide or something we can apply," Logan says. "That's just not going to happen. What we can do is begin to address seriously the issue of climate change. That's what's really causing this."

But it's no easy task getting governments and individuals to make the significant changes necessary to significantly reduce human contributions to global warming.

And the beetles are making it even harder to fight climate change. As the trees they've killed decay, they release the carbon dioxide that they've been storing into the atmosphere.

But for now, Logan and his skiing partners enjoy the thrill of skiing downhill in the backcountry terrain created by mature whitebark pine stands. The trees are spaced just far enough apart to leave room for turns.

"Whitebark pine is the best skiing in my life," Logan says as he weaves his way through the trees.

And he hopes that some day his young grandson can say the same.