Accessibility links
Charities Optimistic After Year Of Lackluster Giving Many charities say they're still feeling the effects of the recession on donations, but some think that things are starting to turn around. According to one survey, more than a third of nonprofits said donations increased in the first nine months of this year, and half of those surveyed plan to increase their budgets in 2011. 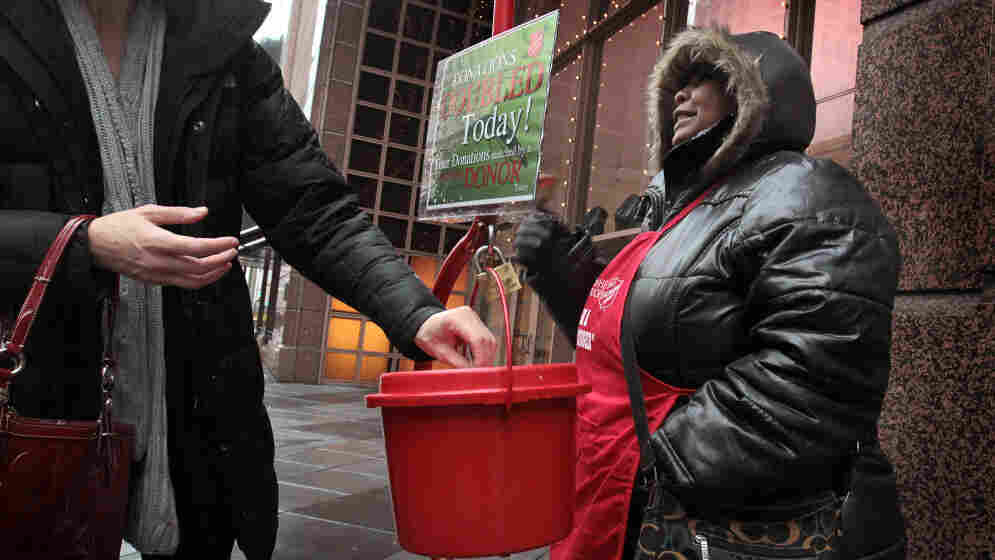 Antionette Levi solicits donations for the Salvation Army Dec. 21 in Chicago. As the season winds down, donations to Chicago-area kettles have been over 10 percent shy of those received last year, but the organization hopes to match last year's record total of $139 million. Scott Olson/Getty Images hide caption

The earthquake in Haiti brought an outpouring of charitable giving this year, with Americans donating about $1.8 billion to help the victims. It was a philanthropic bright spot in an otherwise lackluster year. Charities say they're still feeling the effects of the recession on donations, but some think that things are starting, ever so slightly, to turn around.

I think it looks like the economy is on an upswing that people have faith in.

The Salvation Army's national spokesman, Major George Hood, says donations overall to the Salvation Army have been down about 8 percent for much of this year, and funds are sorely needed for the group's programs to help the disadvantaged.

The organization's red kettle bell ringers were out in full force again this year, collecting spare change from holiday shoppers, and the charitable group hopes the campaign has raised at least as much as it did last year -- a record $139 million.

"The third year of a recession seems to us to have been the one that's hit us the hardest," he says. "And I just think the drudgery and the burden of this long economic recovery that we've been in has caused people to really stop giving."

But in recent days, Hood has started to see some positive signs. And he thinks, maybe, 2010 won't be so bad after all.

"I notice that retail sales are up and from the reports that we're getting from our field units across the country, we're holding our own," he says. "It does seem like there has been a slight turnaround in giving so far this year."

Post-Quake Giving To Haiti: A Look At Major Charities

Attracting A New Generation Of Donors

Una Osili, director of research at the Center on Philanthropy at Indiana University, says that in a recent survey, more than a third of nonprofits said donations had increased during the first nine months of this year. It's still a minority, but a lot better than the 23 percent that saw an increase during the same time last year. And another sign of optimism: Almost half of the charities surveyed plan to increase their budgets in 2011.

"What's also interesting, though, is that the demands for the services that nonprofits provide has increased as well," Osili says. "So whether nonprofits will have enough resources to meet those needs I think is still something that we have to look at going forward."

And that's why many charities were so busy this year looking for new ways to raise money. Many were inspired by the hugely successful campaign of the American Red Cross to raise funds for Haiti quickly using mobile phone text messaging. That campaign drew $32 million, in mostly $10 donations, to the surprise of almost everyone.

Hood says the Salvation Army now allows donors to text contributions to the red kettle campaign on their mobile phones. There's also a virtual red kettle, where supporters who might not want to deal with the cold and rain can do their bell ringing online.

"We've pretty much gone digital. And we're being much more hip than we used to be," Hood says.

That's because the Salvation Army, like most nonprofits, is trying to attract a new generation of donors. Even if it doesn't pay off right away, Hood says he's optimistic about 2011. He thinks people are in a better mood and are willing to spend more, and that the new tax cut package approved by Congress can only help.

Melissa Berman, president of Rockefeller Philanthropy Advisors, which works with individual and corporate donors, also senses a change as the new year approaches.

"I think it looks like the economy is on an upswing that people have faith in," she says. "The persistent problem is going to continue to be unemployment."

But even that, she thinks, could inspire those who do have jobs to give more to charity next year, so they can help those around them who are still in need.