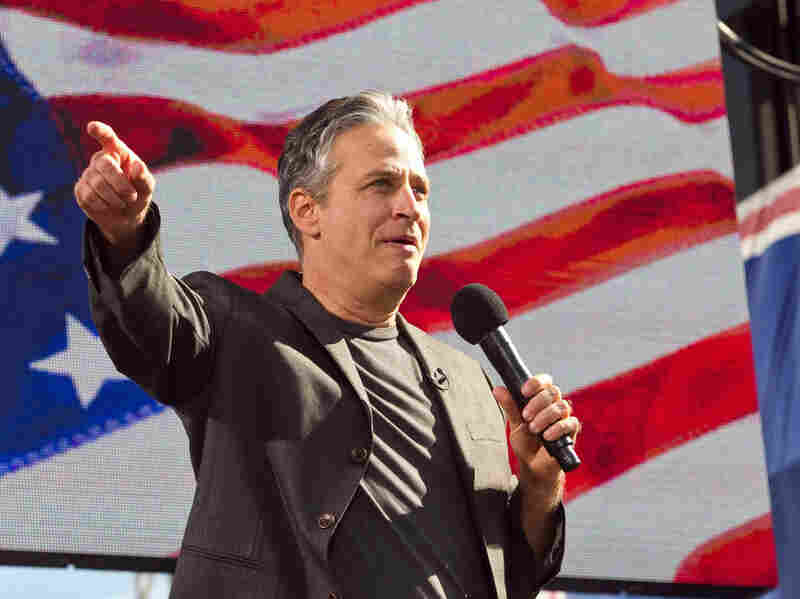 During his Rally To Restore Sanity in October, comedian Jon Stewart told the crowd on the National Mall, "The press can hold its magnifying glass up to our problems." Or, he added, "they can use that magnifying glass to light ants on fire." Paul Morigi/WireImage hide caption

During his Rally To Restore Sanity in October, comedian Jon Stewart told the crowd on the National Mall, "The press can hold its magnifying glass up to our problems." Or, he added, "they can use that magnifying glass to light ants on fire."

One of the last acts of Congress this week was to pass a bill giving health benefits to the first responders who worked at ground zero after Sept. 11, 2001.

It was half the size of the bill Democrats wanted, but the fact that it passed at all seemed unthinkable just a short time ago.

The bill had lingered for years and looked nearly dead, until comedian Jon Stewart nudged it over the finish line.

When the Senate passed the bill on Wednesday afternoon, the most revealing thank you may have come from New York Mayor Michael Bloomberg in a tweet:

Big thanks to @SenGillibrand, Sen Schumer and Jon Stewart @TheDailyShow for work to pass the Zadroga Act http://bit.ly/fDe8Ts

When almost nobody was paying attention to this Sept. 11 first responders health bill, Stewart devoted the entire half-hour of his show to the subject.

"These guys are dying," Stewart said. "And yet we are abandoning them."

The episode was funny at times, but it was also much more earnest than The Daily Show tends to be.

Stewart interviewed four Sept. 11 first responders about their health and the impact that the bill could have on them if it passed.

His opening segment excoriated Republicans for filibustering the measure, and the media for dropping the ball.

"Apparently the party that turned 9/11 into a catchphrase are now moving suspiciously into a convenient, pre-9/11 mentality when it comes to this bill," he said. "What's more, none of the three broadcast networks has mentioned any of this on their evening newscasts for 2 1/2 months."

After Stewart's tirade, that began to change.

Rallying To The Call

Even the White House took notice.

"I think he has put the awareness around this legislation," White House spokesman Robert Gibbs said at a press briefing last week. "He has put that awareness into what you guys cover each day, and I think that's good. I hope he can convince two Republicans to support taking care of those that took care of so many on that awful day in our history."

By this point, Stewart was no longer a voice in the wilderness.

"How do they sleep at night after this vote on ground zero first responders from 9/11?" Fox News anchor Shepard Smith started publicly shaming Republican senators for opposing the bill. He called Stewart "flat-on, absolutely right."

"These people ran to ground zero to save people's lives and we're not going to even give them medicine for the illnesses that they got down there? It's disgusting, it's a national disgrace, it's a shame, and everybody who voted against it should have to stand up and account for himself or herself. Is anybody going to hold them accountable?"

"I think you just did," replied Fox's Chris Wallace.

Fake News But A Real Voice

For a long time now, Stewart has occupied a unique place at the nexus of news, politics and comedy.

"Here's a guy who will tell all comers that he's got a fake news show. It's not a real news show. And yet he bludgeons CNN into taking Crossfire off the air. Presidential candidates announce on his show. The president is a guest. He's become an influential insider."

And he earned that insider status by playing the role of the outsider.

The last time the country discussed Stewart's political clout in earnest was in October, when Stewart drew an estimated 200,000 people to the National Mall for his Rally to Restore Sanity.

"The press can hold its magnifying glass up to our problems, bringing them into focus, illuminating issues heretofore unseen," he said to the crowd. "Or they can use that magnifying glass to light ants on fire. And then, perhaps, host a week of shows on the sudden, unexpected, dangerous flaming ant epidemic."

Some critics accused Stewart of missing an opportunity with that rally. They said he can bring hundreds of thousands of people to the mall, but for what? To what end?

The passage of the Sept. 11 first responders health bill may answer that question.