Accessibility links
How a Tiny Beetle Could Decimate Yellowstone Thanks to global warming, the mountain pine beetle is spreading faster than ever - and leaving a trail of dead trees in its wake.  Here's how a single beetle can destroy life for everything from woodpeckers to grizzly bears.

How a Tiny Beetle Could Decimate Yellowstone

How a Tiny Beetle Could Decimate Yellowstone 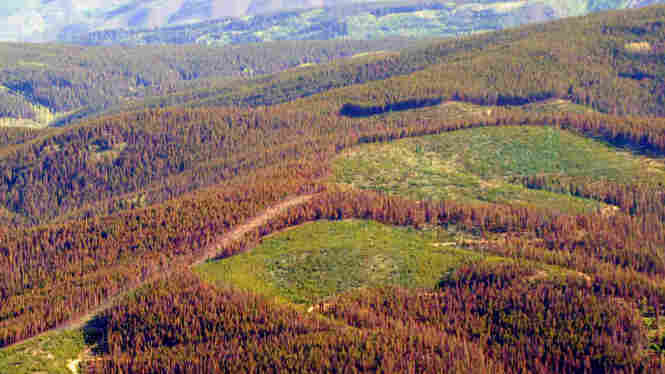 Like this forest in Colorado, Whitebark Pines turn red when after being killed by the Mountain Pine Beetle. Jen Chase/AP. Jen Chase/AP/ASSOCIATED PRESS hide caption 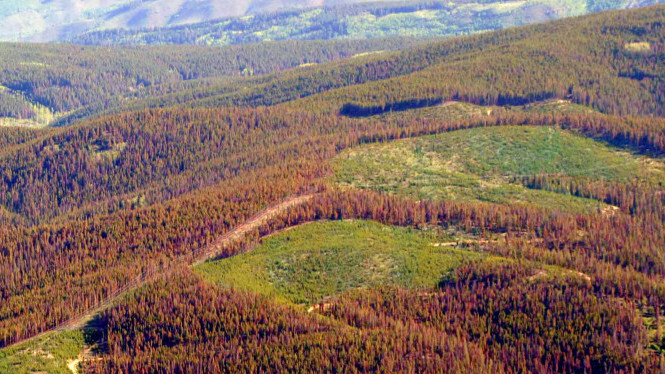 Like this forest in Colorado, Whitebark Pines turn red when after being killed by the Mountain Pine Beetle. Jen Chase/AP.

For centuries, the mountain peaks in and around Yellowstone National Park were a healthy, frigid environment for the whitebark pine tree.

But as global warming snakes its way into higher altitudes, a less-welcome resident in taking up space in this fragile ecosystem: the mountain pine beetle.

The last few decades have seen warmer temperatures and forests ravaged by the beetle, the reach of which effects wildlife from woodpeckers who live in the whitebark pine to grizzly bears that eat its cones.

And while the beetles only attack mature trees, entomologist Jesse Logan argues that young trees can't do what the mature trees do. Not only do their seeds feed animals -- their broad canopies shade the snow so it stays around longer. That makes streams cool enough for trout and keeps the rivers flowing.

"So they're tremendously important for things for things we value like wildlife and of course water," he says.

To make matters worse, the rapid spread of beetles leads to even warmer temperatures.   As the trees they've killed decompose, they release the carbon dioxide that they've been storing into the atmosphere.  That adds to the global warming problem.

Given all this, the federal government is considering putting whitebark on the endangered species list.

Logan predicted the danger to whitebark pine trees 10 years ago.

"It's the sort of time in your life that you hope to hell you're absolutely dead wrong," he recalls.  "And it comes to be that you weren't right enough.  Now I wonder if my grandchild will ever have the experience of being in white bark.