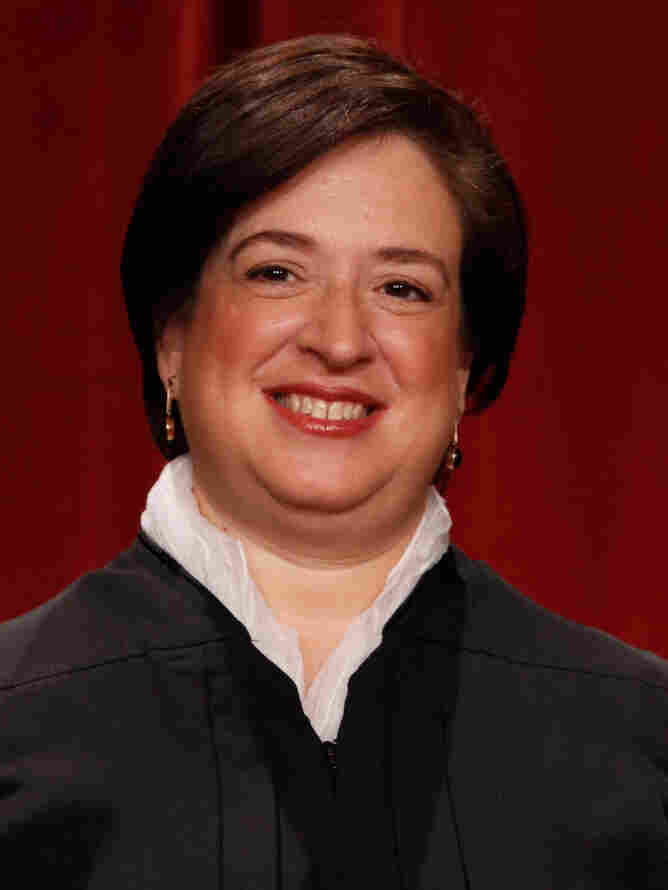 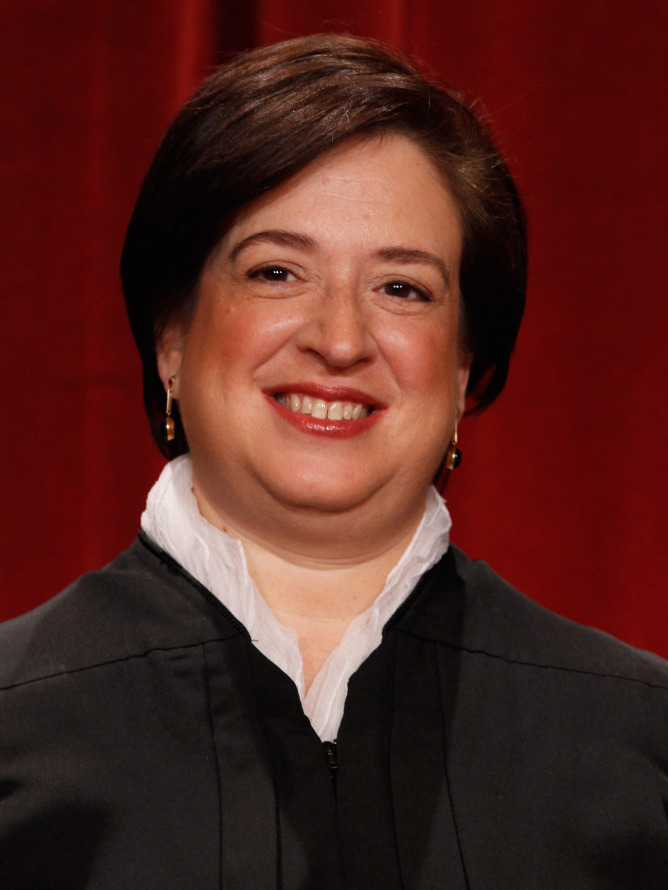 Supreme Court Justice Elena Kagan, the first judicial appointee in 40 years with no prior experience on the bench, seems to be settling into her new job with remarkable ease. Of course, she has not written any opinions that have yet seen the light of day. But Kagan already has big fans among her colleagues, from the conservative Justice Antonin Scalia to the liberal Justice Ruth Bader Ginsburg.

Sitting at the far end of the Supreme Court bench in the junior justice's seat, Kagan looks chipper, cheerful, calm and content. That last word -- content -- is not one that her old friends would have used to describe her before. "She's always been on a path," observes one friend, "looking down the road, striving." And even though she loved being dean of Harvard Law School, said this friend, there was always a sense that "she was pursuing a longer-range goal."

No more. Elena Kagan is where she's always wanted to be, and she loves being there. As a friend told her after seeing the new justice just two months after she was sworn in, "Man, does life tenure suit you well."

For the court's junior justice, even what might have appeared a disadvantage has turned into an advantage. Because of her previous job as the government's chief advocate in the Supreme Court, Kagan has had to recuse herself from 27 cases that are on the court's argument docket.

"Ironically," said a White House aide, "that has smoothed her transition, because in this first term she doesn't have such a heavy load." Nearly all the justices are frank in saying that in their first terms, no matter how much prior judicial experience they had, they sometimes felt like they were drowning.

In a recent interview with C-SPAN, Kagan said that she, too, can feel overwhelmed.

"It's sort of drinking out of a fire hose, you know. It's always something new, something different," she said. "The learning curve is extremely steep ... sometimes it seems vertical."

The learning curve is extremely steep ... sometimes it seems vertical.

But because Kagan is recused from about a third of this term's cases, she has had more time for that climb. So she seems perhaps less winded than other newbies.

Kagan says she reads briefs mostly on her Kindle. Her colleagues tease her about her relatively light workload, but her recusals are mainly behind her, and she has quickly fit into the rarefied and unrarefied world the justices live in. She asked Scalia, an avid hunter, to take her skeet shooting. And on the bench, she has proved herself an astute and pragmatic questioner, often putting a new cast on queries from other justices.

For example, there was this fall's case testing an Arizona program that subsidizes private, mainly religious schools. Because Arizona's state Constitution forbids direct aid to religious schools, the state uses a pass-through mechanism to fund them; taxpayers receive credits for contributing to student tuition organizations, or STOs, that funnel the money to primarily religious schools. At the oral argument in the case, Justice Anthony Kennedy wondered whether a similar mechanism could be used to fund private schools that discriminate on the basis of race instead of religion.

Kagan followed up. She noted that while the court has upheld tuition voucher programs, those apply to all comers equally. 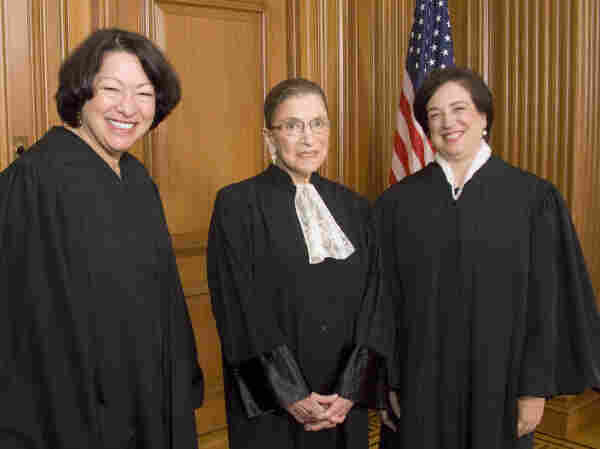 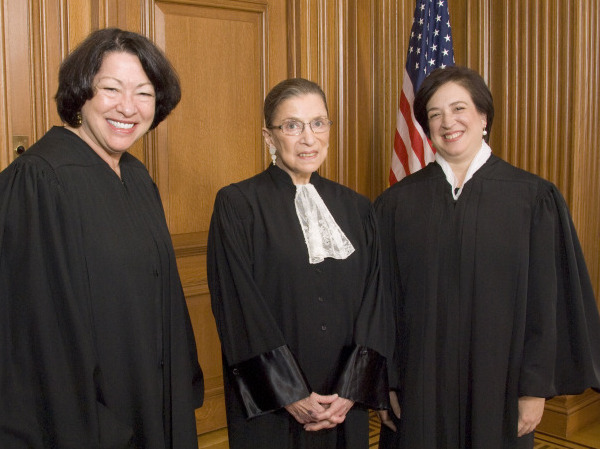 This photo provided by the Supreme Court shows (from left) Justices Sonia Sotomayor, Ruth Bader Ginsburg and Elena Kagan in the Justices' Conference Room on Oct. 1, before Kagan's investiture ceremony.

Another case tested when picketers at a military funeral can be sued for inflicting emotional distress on the family of a dead soldier. This time, as she often does, Kagan seemed to be looking for a practical solution to a knotty problem.

The picketers here carried signs that read "God hates fags" and "You're going to hell." But Kagan wondered: If you let a jury award money damages here, why not when protesters carry signs that say "Get out of Iraq"? In short, allowing such suits would allow jurors to award damages based on their own tastes or even political views.

Probing for a way to thread the needle, Kagan asked the lawyer for the dead soldier's family whether the solution might be a general statute that puts a buffer zone around funerals.

There are times, too, when it is clear that Kagan, perhaps because of her experience as the dean of Harvard Law School, brings an important and different perspective to the court -- namely a familiarity with the youth culture. In a case testing the constitutionality of a California law that bars the sale of violent video games to minors, Kagan asked California Deputy Attorney General Zackery Morazzini if he thought the video game Mortal Kombat was prohibited by the statute.

Morazzini responded, "I believe it's a candidate, your honor, but I haven't played the game and been exposed to it sufficiently to judge for myself."

She observed that under California's rationale, a jury could convict someone for selling to a minor Mortal Kombat, "which is an iconic game, which I am sure half of the clerks who work for us spent considerable amounts of time in their adolescence playing."

With Kagan just at the very beginning of her tenure, she knows she has time, most likely decades, to serve. Friends say they have never seen her so relaxed and so able to be herself, no longer calculating the personal odds of advancement. As one longtime friend put it, "She is as happy as I have ever seen her."

Then, too, there is the institution that she is now part of, an institution composed of people who sometimes passionately disagree but are invested in the place they work. Kagan, in her C-SPAN interview, described the day she was privately sworn in last August (a private oath was administered so that she could begin work before the court officially began hearing cases in October).

Chief Justice John Roberts took her on a little tour of the court, beginning with the robing room, where wooden lockers displayed the justices' names -- from the most senior, Justice Stevens at one end, to the most junior, Justice Sotomayor, at the other. The court tour lasted only about 15 minutes and ended up back at the robing room.

But as Kagan observed, in that 15 minutes, "what had happened was that Justice Stevens' nameplate had come off, and each of the nameplates had gone over one, and now there was a Justice Kagan.