Accessibility links
When Does Moderate Drinking Become A Problem? Some drinkers consume more than what's considered safe, but less than what's considered risky -- what researchers call the "gray zone" of alcohol consumption. Studying this gray zone of drinking may explain who's at risk for problems and who's not. 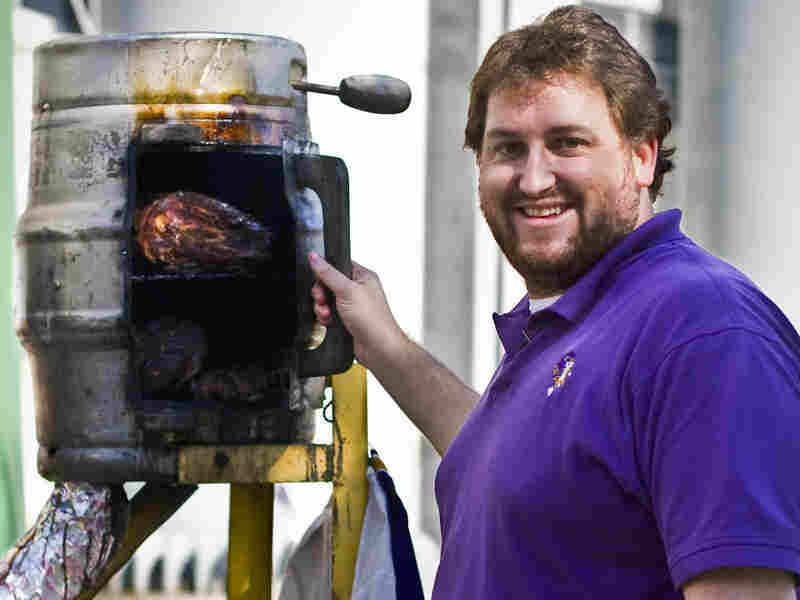 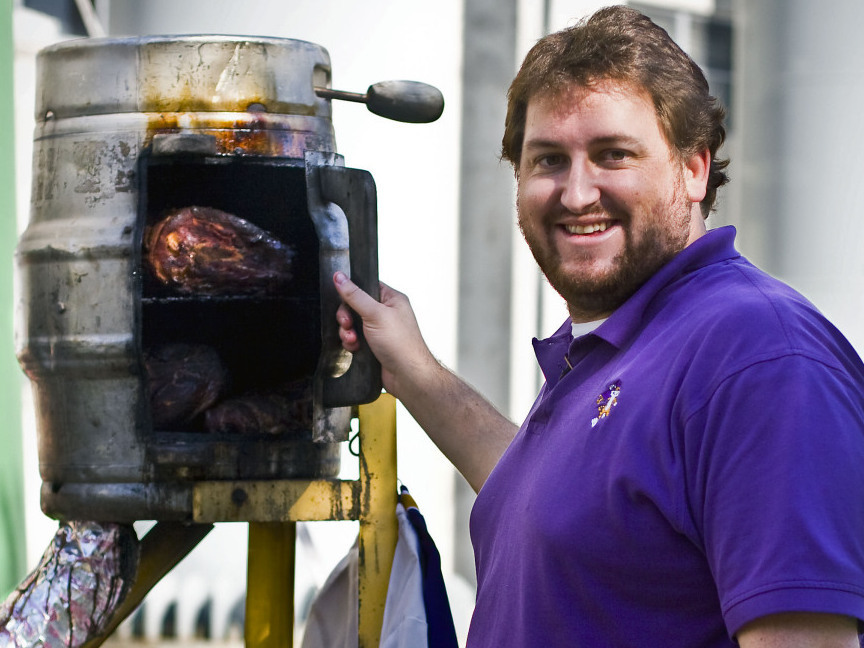 Jay Ducote with his award-winning Blackberry, Bourbon, Butt dish, a pork shoulder injected with honey and bourbon, and smoked for 12 hours.  Ducote appreciates good food and drink, but says he sometimes overdoes it.

Ever wonder when you reach for that third glass of wine or order that third cocktail if maybe you're pushing it? Well, you're hardly alone, particularly during the holiday season, when mountains of food and alcohol are heaped upon most social gatherings.

Jay Ducote is one of those drinkers who wonders if he's overdoing it with alcohol. He absolutely enjoys his food and drink, and writes about both in his blog, Bite and Booze. The blog chronicles his adventures, mostly in southern Louisiana, where he lives. He relishes mixing food and drink in his own homemade recipes. Bourbon often plays a big role.

How Much Is Safe?

Ducote says he's a big guy who tolerates more alcohol than most. When he goes out with friends or watches a football game, he'll often have three to four drinks. But sometimes he does wonder if he's consumed too much. At that point, he says, he'll usually just take a break and not drink at all for a few days.

Rethinking Drinking: Alcohol And Your Health

The National Institutes of Health has some tips on how to drink safely.

Corbin says some people can probably drink within the range of safe drinking and binge drinking without getting into too much trouble. But others may be at higher risk for alcohol abuse if they get up to two, three, even four drinks per day.

At Arizona State University, Corbin is studying this gray zone of drinking to try to figure out who's at risk for problems and who's not. He does his research in a bar lab. It's a scientific laboratory dressed up to simulate a bar environment, complete with dark floors, black ceilings, chandeliers, a flat-screen TV and rows of bottles behind the bar.

Volunteers come to the bar for one night only, fill out a questionnaire, and then they're served three cocktails over a 30-minute period.

Everyone is served the same drink of vodka mixed with 7-Up, cranberry juice and lime.

One of the questions Corbin wants to answer by observing and questioning these drinkers is whether their expectations about alcohol affect how much they actually drink. For example, for some people, just coming in to the bar lab affects their behavior before they've even had a thing to drink, says Corbin.

"And people can observe that in the real world, too," Corbin says. "If you go with a group of friends into a bar, before they've finished the first drink, oftentimes they're acting more social and talking more loudly."

Once his research volunteers have consumed their three drinks, Corbin asks them how they're feeling. Are they invigorated, for example? Do they feel excited or happy? Or do they feel a little depressed, dizzy, sleepy, maybe even a bit sick?

What Corbin is finding is that people who feel stimulated by alcohol are more likely to keep drinking if given the chance. Other researchers are looking at known risk factors for alcohol problems, like family history and an impulsive personality.

And eventually, researchers hope to have a full picture of what turns "moderate" drinkers into "problem" drinkers. Harvard epidemiologist Eric Rimm says, for example, that if you're a child of a mother or father who's an alcoholic, then maybe the healthiest amount of alcohol is zero.

But until research is conclusive, for those who, like Jay Ducote, drink in that "gray" zone, it may be best to simply add up your own individual risk factors and then make a reasonable judgment about whether you really want to have that third glass of wine or cocktail.