Accessibility links
The Year In Health Care: A Topsy-Turvy Ride From its dramatic passage to efforts to repeal it or have it declared unconstitutional, the most sweeping change to federal health law in more than 40 years roiled the nation's politics in 2010. It promises to continue to do so into 2011. 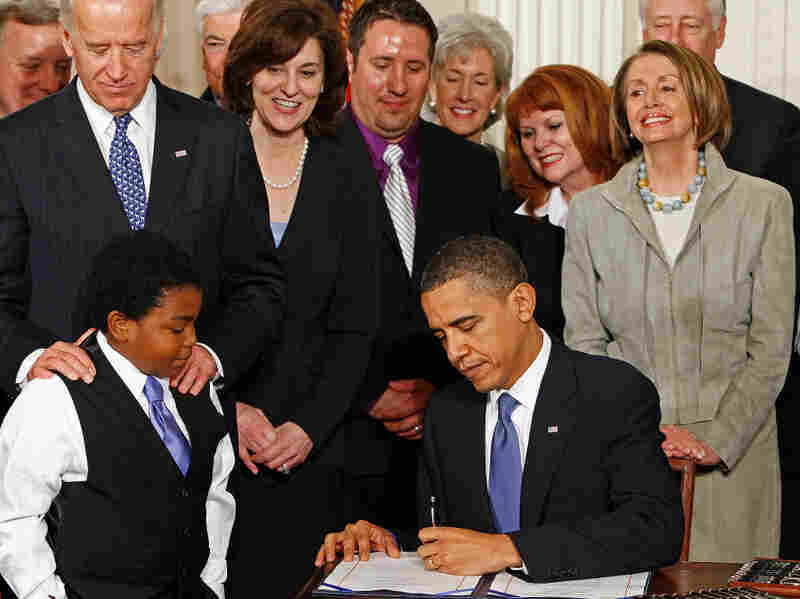 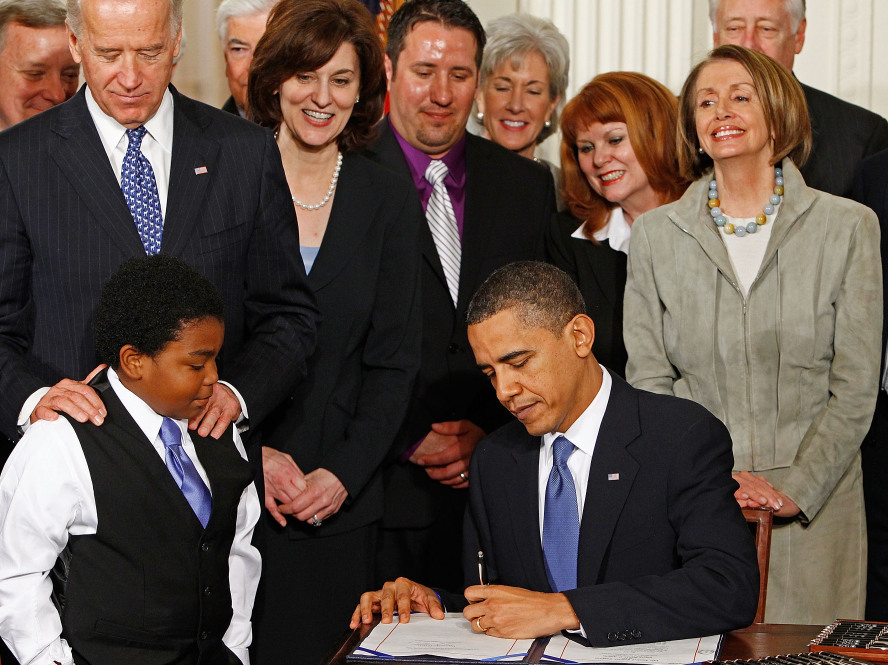 President Barack Obama signs the Affordable Health Care for America Act during a ceremony at the White House on March 23.

If someone wrote a novel with as many ups and downs as the Patient Protection and Affordable Care Act has experienced this year, it would almost certainly be rejected as implausible.

From its dramatic passage to efforts to repeal it or have it declared unconstitutional, the most sweeping change to federal health law in more than 40 years roiled the nation's politics in 2010. And it promises to continue to do so into 2011.

The year actually began relatively smoothly for backers of the measure. The Senate had passed the bill in dramatic fashion on Christmas Eve. Most observers assumed President Obama and Democratic lawmakers would work out a compromise that would quickly be approved by both houses and become law.

But all that was turned on its head Jan. 20, with the upset election of Republican Scott Brown in the special election to fill the remaining term of the late Massachusetts Democratic Sen. Ted Kennedy, who had occupied the seat for half a century.

"It was shocking that a Tea Party darling would get elected to Ted Kennedy's seat, but you could see it coming," said Theda Skocpol, a Harvard government and sociology professor and co-author of the new book Health Care Reform and American Politics: What Everyone Needs to Know.

The most immediate impact of Brown's victory was that it deprived Democrats of their 60th Senate vote, the supermajority they needed to guarantee passage of the health care bill without a Republican filibuster.

For a moment, Skocpol said, it looked like the end of the road for the measure.

"You could see the panic spreading among the Democrats in Washington, as they realized the beginnings of the electoral wave that ultimately submerged them in the Congress," she said, "and Washington isn't a courageous place, particularly when people feel their re-election is at stake."

Eventually, however, Democrats realized that they were so far into the effort they basically had no choice but to push ahead. Overcoming last-minute controversies and exploiting every procedural rule they could, they were able to get the bill passed and to President Obama's desk by the end of March.

Republicans Take To The Courts

While President Obama and Democrats were celebrating in Washington, Republicans around the country were filing the first of what ultimately would become more than 20 lawsuits against the measure's so-called "individual mandate." That's the provision that requires nearly every American to have health insurance or pay a penalty starting in 2014.

"This lawsuit is not essentially about health care, it's about liberty" said Virginia Attorney General Ken Cuccinelli, whose filing specifically addressed a Virginia state law that seeks to shield its residents from having to buy insurance against their will. "It's about whether we'll lose our liberty and allow the fed government to dictate to us what we must buy in the name of its policy goals."

In December a federal district court judge ruled in Cuccinelli's favor, finding that Congress had overreached in imposing the insurance requirement. But two other federal district court judges have ruled the other way, finding the insurance mandate is within Congress's authority under the Constitution's Commerce Clause. Most experts on both sides agree the matter is likely to be settled by the U.S. Supreme Court.

While the lawsuits started their slow slog through the judicial system, Republicans in Congress -- and those running for election to Congress -- launched a concerted effort to demonize the measure. Ads by candidates and outside groups criticizing it flooded the airwaves.

By Election Day, Republicans retook the House and gained six seats in the Senate. They vowed to make undoing the health care law the centerpiece of their agenda.

"Our first goal is to repeal it and replace it, and if we have the votes to put it on his desk we're gonna do that," Senate Minority leader Mitch McConnell told Fox News.

Yet for all the massive campaigning against the measure, public opinion about it did not take a big nosedive. On the other hand, it also didn't take the big jump many Democrats predicted after benefits started to take effect in the summer and fall.

Drew Altman, president of the nonpartisan Kaiser Family Foundation, which has been conducting monthly polls of the public's view of the health law, says not that much has changed since the debate began.

"If you look back, the public was split and this was a divisive issue before the legislation passed, it was split during the legislative debate, and it remains split today," Altman says. "And it has been divided on pretty traditional partisan, ideological grounds."

At the same time, however, polls show that while support for the law overall is weak, support for many of its specific provisions, even among Republicans, is quite strong.

Skocpol says there's a longstanding academic explanation for that: "Americans are ideological conservatives but operational liberals. That's been an established principal in political science and the study of American public opinion for 50 years."

She says that means if you ask people if they prefer the government or the market to tell individuals what to do, they will always give the more conservative answer, "but if you ask Americans specific things -- do you want aid for the poor to buy affordable health insurance? Do you want tax credits for small business to help them insure their employees? They will always give the more liberal answer."

Meanwhile, Skocpol says she thinks that Republican vows aside, it will be very difficult to make the new health care law go away, although "that's not to say that there can't be all kinds of mischief and delay in carrying through the intended combination of cost controls and expanded coverage."

All of which means the new Republican-led House next year will hold lots more hearings and take lots of votes to try to de-fund parts of the law. And more judges may declare the individual insurance requirement in the bill unconstitutional.

But experts say that the more new benefits of the law become entrenched, the harder they will be to take back.