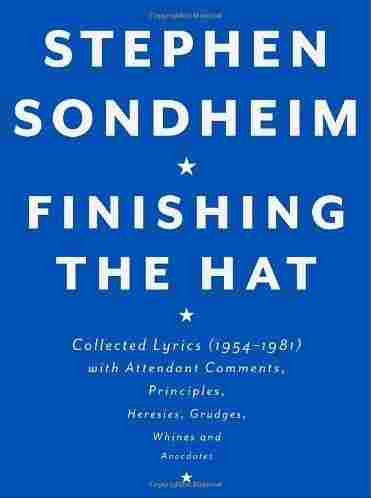 Favorite Books Of 2010 asks NPR personalities to write about  one book from the past year that they loved. Bob Mondello reviews movies and covers the arts for NPR.

Well, not usually – but that's been my routine every day since I started reading Finishing the Hat, the belligerently accessible, altogether fascinating volume of "comments, principles, heresies grudges, whines and anecdotes" (that's all on the cover) from the musical theater's reigning genius.

If you don't already know that with Company, Pacific Overtures, Sweeney Todd, Passion, and more than a dozen other classics, Stephen Sondheim more or less singlehandedly made musical theater a form sophisticated adults needn't be embarrassed to enjoy, this may not be the book for you. It helps to be able to hum along, whether he's passing judgment (often critical) on his own rhymes, or those of deceased predecessors "who can no longer defend themselves, but who also cannot be upset by anything I have to say." He’s merciless with Noel Coward, annoyed by Alan Jay Lerner, and even a little snippy about his mentor Oscar Hammerstein II.

But he’s no less barbed about his own work, often chastising himself for lines most writers would kill to have come up with. (Some in West Side Story's rousing "America," he writes, "melt in the mouth as gracelessly as peanut butter and are impossible to comprehend.") And the book is crammed with photos of his worksheets -- rejected rhymes, crossed-out but still-legible stabs at ideas he would later polish to perfection. If the rhyme in a lyric like "we have so much in common/ it's a phenomen/-on" makes you smile, you'll find grins on every page.

Technically, the book is a collection of the lyrics Sondheim wrote between 1954 and 1981, along with details about the creative process that led to them. And that's plenty heady stuff. But much as I love a snarky anecdote -- and there are plenty -- it's the asides about craft that fascinate. Just as one example, here's a parenthetical footnote on how to make rhyming tickle the mind as well as the ear:

Curiously enough, rhymes whose endings are spelled differently (for example, "rougher/suffer") are more interesting than those which are spelled the same ("rougher/tougher"), not only to the eye, but to the ear, perhaps because the brain subliminally sees them in print and is therefore more surprised when they come along. "Weary" and "bleary" are a less effective pair than "weary" and "eerie," or even "weary" and "leery," not to mention "weary" and "hara-kiri."

I've been grinning away for the better part of a month now. And will be until his next volume comes out.