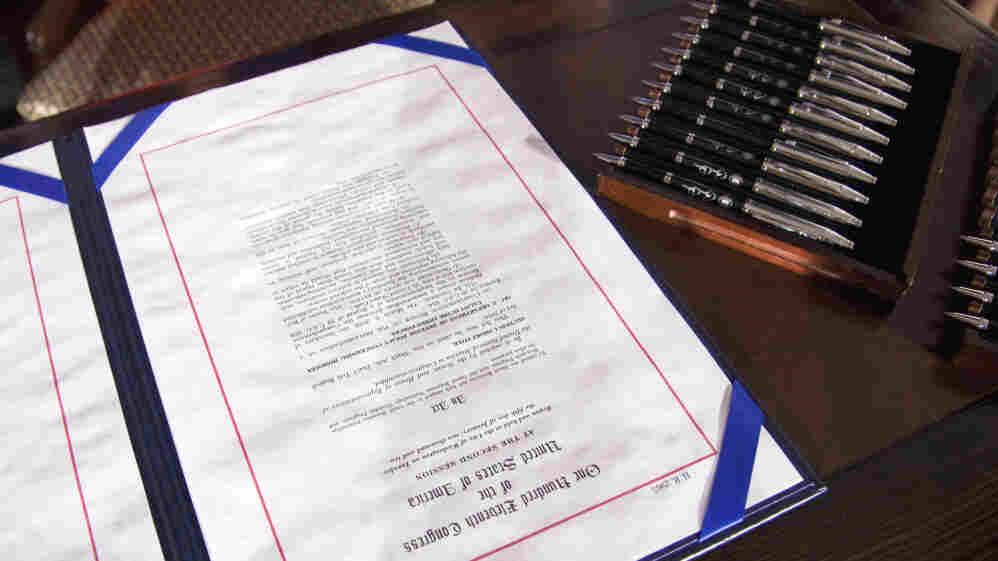 The "don't ask, don't tell" repeal legislation that allows gays to serve openly in the military sits on a desk at the Interior Department on Dec. 22, 2010, prior to President Obama's signing it. Evan Vucci/AP hide caption 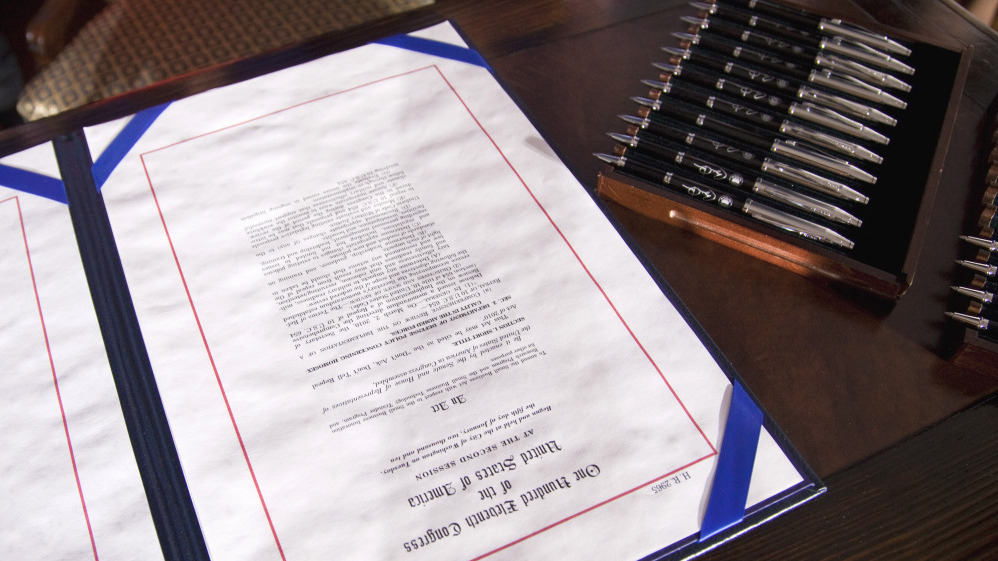 The "don't ask, don't tell" repeal legislation that allows gays to serve openly in the military sits on a desk at the Interior Department on Dec. 22, 2010, prior to President Obama's signing it.

Last week's repeal of the "don't ask, don't tell" policy, which barred gays and lesbians from serving openly in the military, pointed to changing attitudes from military leaders and the public.

But legal questions remain about how the new policy will be implemented, and lawyers who represent discharged and current gay and lesbian troops are preparing several challenges.

Four years ago, Richard Collins was a staff sergeant at an Air Force base in New Mexico.

He had been in the military since he was 18.

"I look at the military as being my family," he says. "And I put my all into it. I was always picked No. 1, always passed my inspections, always was promoted early, and then at the end, here's the boot."

Collins got the boot 10 years after he enlisted. Civilians off-base reported that he gave his partner a kiss. He was discharged under don't ask.

Discharged troops generally get a severance payment to help adjust back to civilian life. But if you're discharged under don't ask, your payment is cut in half. The Air Force gave Collins $13,000 instead of the $26,000 he would otherwise have received.

Now he and others are part of an ACLU lawsuit trying to recoup the rest of the money.

"It's not just about the money; it's just what's right. When I was in the military that's what was put into our head, always do what's right even when someone else is not looking," he says. "In this instance they did the opposite."

Severance pay is just one of the issues that people who were kicked out of the military under the repealed policy are now challenging in court.

Aubrey Sarvis is executive director of Servicemembers Legal Defense Network. The organization is representing a major who was discharged from the Air Force four years ago and wants to rejoin once he can serve openly.

"That's four years that's going to be very difficult to make up assuming he can be reinstated in 2011," Sarvis says.

The lawsuit is seeking credit for the four years the major was out of the service under don't ask.

"That puts him on a better footing; it gives him four more years toward his 20-year-retirement benchmark," he says. "I don't know if we're going to be able to get that but we're certainly going to seek it."

People who were discharged from the military under don't ask just before they hit the 20-year-retirement mark may sue to get those retirement benefits.

So Just When Will 'Don't Ask, Don't Tell' Really End?

And there are legal questions where the military has paid for someone to attend school in exchange for years of service.

"Some of these people get kicked out because of 'don't ask, don't tell' while they're in school or shortly after they finish school," says James Esseks, who directs the ACLU'S Lesbian Gay Bisexual Transgender Project. "And then the government goes and recoups their tuition payment. Because you're not serving for, whatever it was, seven years, and so you've got to pay the tuition back. Those are people who I think may have a claim."

The military doesn't know yet how it will answer any of these questions.

At a White House briefing last week, spokesman Robert Gibbs said the Obama administration is working on it.

It's possible that the panel will decide all these issues in a way that makes gay service members and their lawyers happy.

But Mary Bonato, of Gay and Lesbian Advocates and Defenders, thinks it's more likely that a judge will have the final say. "Normally a repeal looks forward, so it changes the law from that point forward but not backwards," she says.

Going forward, gay and lesbian troops who are in the military can soon get married in states where same-sex marriage is legal without fear of being discharged.

Which raises another raft of questions, says Bonato.

"One of the benefits of being in the military is that they want you to be able to take care of your family. And now it is going to be clear that gay and lesbian service members have families too," she says.

Right now the military says it won't recognize same-sex spouses. In fact, the Defense of Marriage Act legally prevents the military from doing so.

But lawsuits challenging DOMA have been working their way through the courts for a while.

And soon, openly gay service members may join those suits.