Accessibility links
Pondering A 'Plan B' In Afghanistan How many U.S. troops leave Afghanistan in 2011 will depend on what progress is made in the next six months. If it's underwhelming, there may be calls to change the current strategy. Alternatives that focus on counterterrorism rather than counterinsurgency are already in the making. 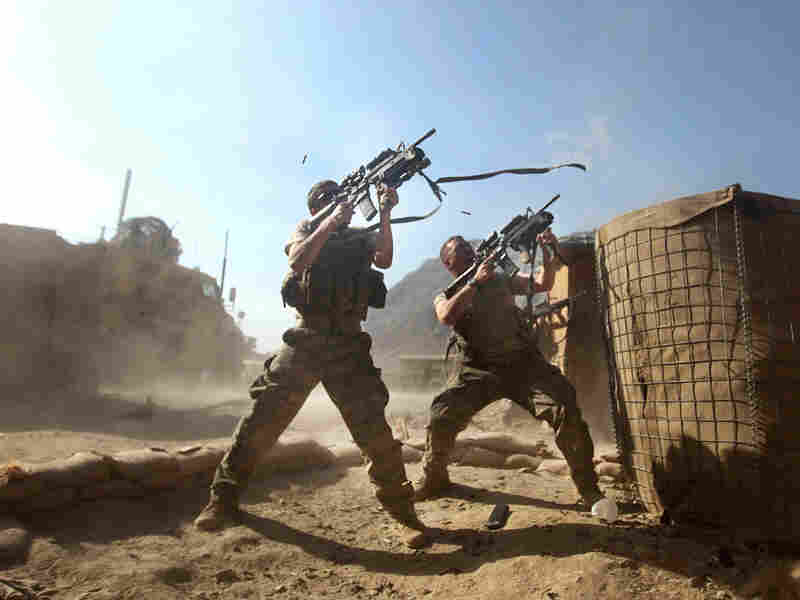 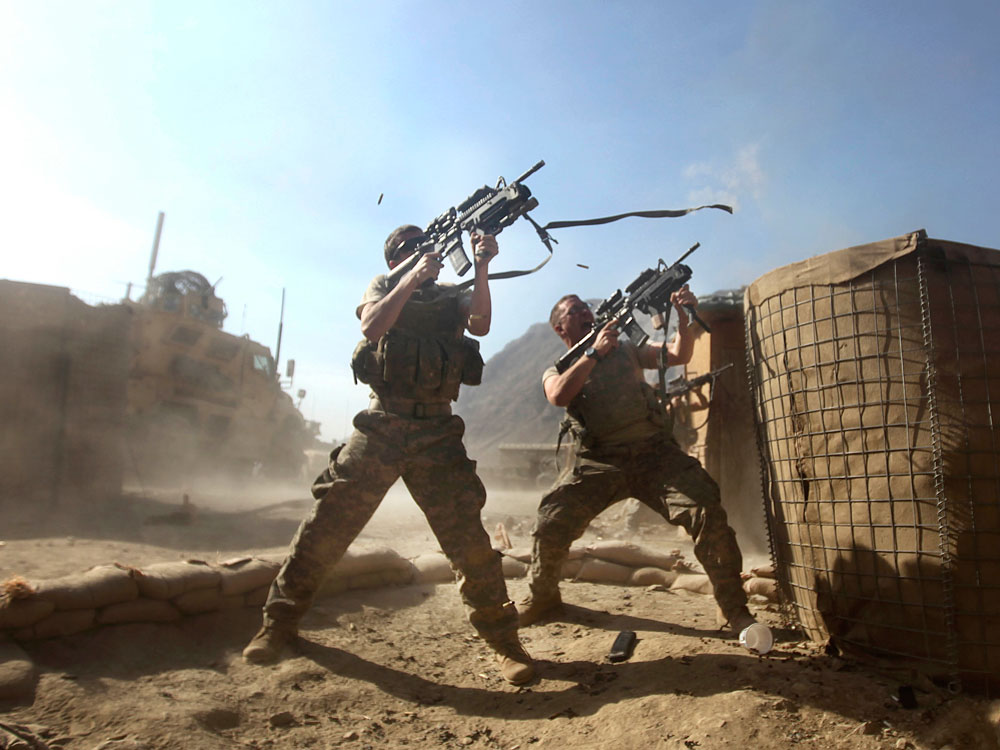 U.S. soldiers return fire upon a sudden attack by Taliban on Combat Outpost Badel in eastern Afghanistan near the Pakistan border, Dec. 25.

The new year will mark a new chapter in the war in Afghanistan. President Obama has said that starting in July he wants to start drawing down U.S. troop levels. How many troops leave will depend in large part on what kind of progress is made in the next six months.

If that progress is underwhelming, there may be calls to change the strategy altogether. And some alternatives are already in the making.

Things could go well in Afghanistan in the next six months: The Karzai government could get in line, the Pakistanis could do more to pressure the Taliban, and the overall violence level in Afghanistan could drop.

But if that doesn't happen, there are several people beginning to plot out alternatives.

Richard Armitage, who served as deputy secretary of state in the last Bush administration, is one of them. "I think Afghanistan is quite important to us, but it's not of overriding importance to our national interests," he says.

Armitage is part of a chorus of former U.S. officials and military experts who say the current strategy isn't the right one. Instead, he wants fewer U.S. troops. And those troops should be focused not on building Afghan civil society, but on destroying insurgent networks -- less tea drinking, more drone strikes.

"We certainly don't want to be hit from there again, but I think we can diminish the ability of al-Qaida and Taliban allies from hitting us by continuing to disrupt them on a counterterrorism basis, which I think calls for a slightly smaller footprint," he says.

We have disrupted, we have dismayed [al-Qaida]. We may not have totally dismantled them, but they're not what they used to be in Pakistan or Afghanistan. ... But if we concentrate all our play with all our marbles in Afghanistan, this is going to leave us, I think, ill-prepared in other parts of the world.

Plan A is what's happening now in Afghanistan, the counterinsurgency strategy: protecting the local population, trying to get Afghans to buy into their central government and training Afghan security forces so they can take over and U.S. forces can leave.

Plan B, as Armitage sees it, is something called a counterterrorism strategy -- an approach favored by Vice President Biden in the fall of 2009 when the administration was weighing its options and ultimately decided on the counterinsurgency strategy, Plan A, instead. Armitage says that has worked -- to a point.

"We have disrupted, we have dismayed [al-Qaida]. We may not have totally dismantled them, but they're not what they used to be in Pakistan or Afghanistan. They've morphed into other places -- the Maghreb and Yemen, as we've seen, and perhaps into Somalia. But if we concentrate all our play with all our marbles in Afghanistan, this is going to leave us, I think, ill-prepared in other parts of the world," he says.

But Michael O'Hanlon, a senior fellow at the Brookings Institution, notes that Afghanistan is the place where the Sept. 11 attacks were originally conceived and coordinated.

"Therefore, to suggest that this is just one more place in the broader struggle against al-Qaida, I think, goes too far in the other direction of trivializing the stakes," he says.

O'Hanlon says the counterterrorism strategy -- with fewer troops -- would allow insurgents to take sanctuary in the southern provinces of Afghanistan where U.S. troops have worked hard to gain ground. Giving that up, he says, would essentially mean defeat.

He does agree, though, that if sufficient progress hasn't been made by summer, it'll be time to rethink the strategy. And he's suggesting yet another alternative.

The strategy that we've adopted is moving in the right direction. And, if it's given the time and the resources, all the evidence suggests that it will pay off.

Carl Forsberg, Institute for the Study of War

"Any place that we've fought to clear, we should stay in. We should not concede any territory that we have won from the enemy. But we don't have to go into every new additional part of the south and the east before we begin our downsizing," O'Hanlon says. In other words, keep the counterinsurgency, but scale down ambitions.

Despite the alternatives being discussed, there are still those who say the current strategy is the right one. Carl Forsberg, with the Institute for the Study of War, was part of a team that did research for Gen. David Petraeus, the top commander of U.S. and NATO forces in Afghanistan, this summer.

"The strategy that we've adopted is moving in the right direction. And, if it's given the time and the resources, all the evidence suggests that it will pay off," he says.

But even Forsberg acknowledges there are two major sticking points in this war: Afghanistan's weak government and the safe havens -- when insurgents in Afghanistan flee across the border to Pakistan for sanctuary.

"Ultimately, you have to change their calculus and you have to make it clear that the U.S. is committed to defeating insurgent groups in Afghanistan. So far, the Pakistani calculus does not appear to have changed," Forsberg says.

Is any evidence that leads him to believe that calculus will change?

That answer may get clarified in the next six months. If not, even those who support the current strategy may start to look around for a Plan B.