Accessibility links
Long View: Marcella Hazan Brings Italy To America Marcella Hazan is credited with introducing Americans to true Italian cooking. But she began her career teaching science — and didn't have much of an interest in food. 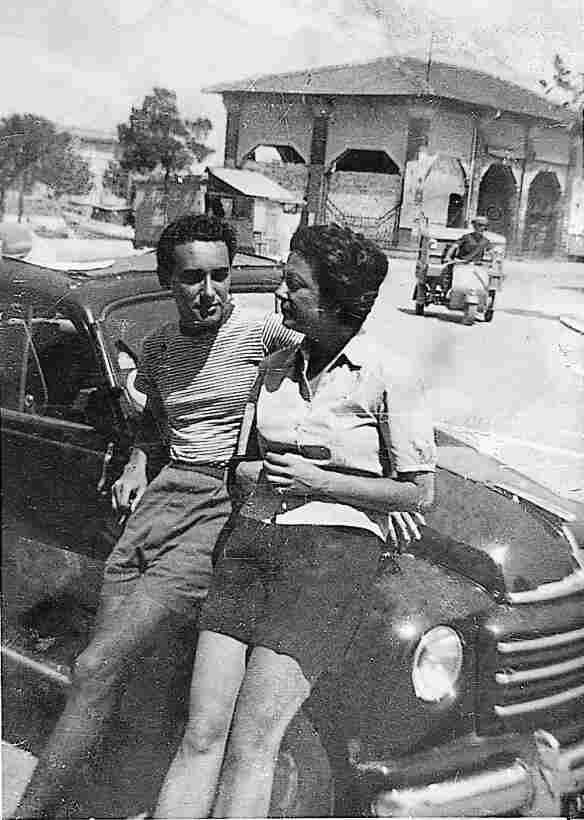 Marcella Polini and Victor Hazan in 1952, in her hometown of Cesenatico, Italy, shortly after they met. Gotham Books hide caption 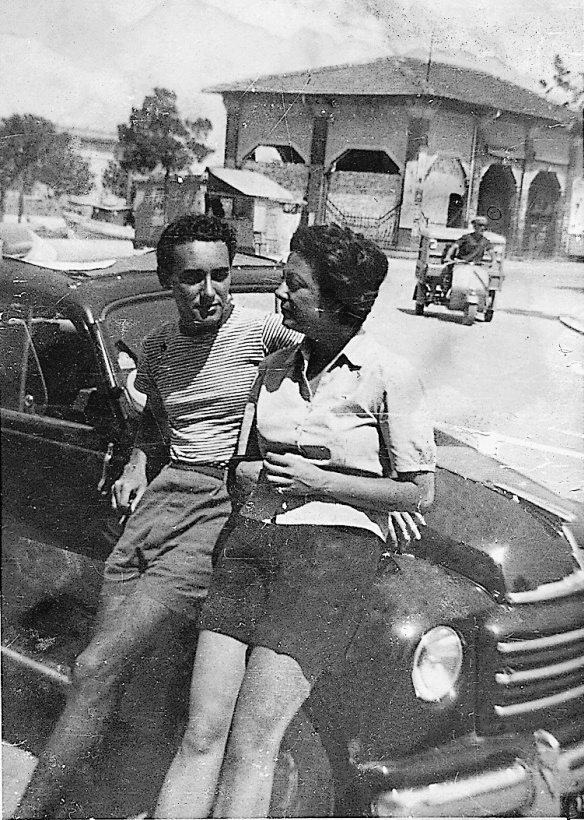 Marcella Polini and Victor Hazan in 1952, in her hometown of Cesenatico, Italy, shortly after they met.

When Marcella Hazan came to the United States in 1955, one of her first priorities was figuring out how she would feed her husband, Victor. The American grocery stores, with all their canned goods and prepackaged foods, were a far cry from the markets of her Italian homeland, where fresh produce, meats and fish were easy to find.

"I never saw a supermarket in Italy," she tells NPR's Linda Wertheimer. "The chicken, they were arriving from the farmer and they were alive. And at the supermarket they were very dead; they were wrapped; it was like a coffin. Everything was not natural."

Despite limited ingredients -- and her limited English -- she did her best to re-create Italian food as she remembered it. And, in doing so, she tapped into a previously unknown talent -- cooking.

Growing up, she didn't have much interest in food. She saw it mainly as fuel -- getting her through the day and all the activities she enjoyed. But she did not know how to cook and wasn't interested in learning. Her interest lay in the sciences -- at university she studied biology, and she took a teaching position after graduation.

But meeting her future husband changed all that. Victor Hazan was an American who had been born in Italy and lived there as a child. He had returned to Italy to write -- and to eat. This was a man who loved food so much, he began planning his next meal before he'd finished the one he was eating.

"He was always talking about food," Marcella remembers. "For me, a young woman, you think that someone who courts you would talk about other things, not food. Especially when you're not interested in food."

Nevertheless, Victor successfully wooed Marcella. They married and remained in Italy for a short six months before his parents called him back to New York to help with the family business. They settled in the suburbs of Forest Hills, where Marcella learned to cook out of necessity.

She was encouraged by her success re-creating favorite foods from home, and Marcella found herself becoming more interested in cooking.  She signed up for a Chinese cooking course -- a cuisine that she found to be similar to Italian with its pasta dishes and layers of flavor. 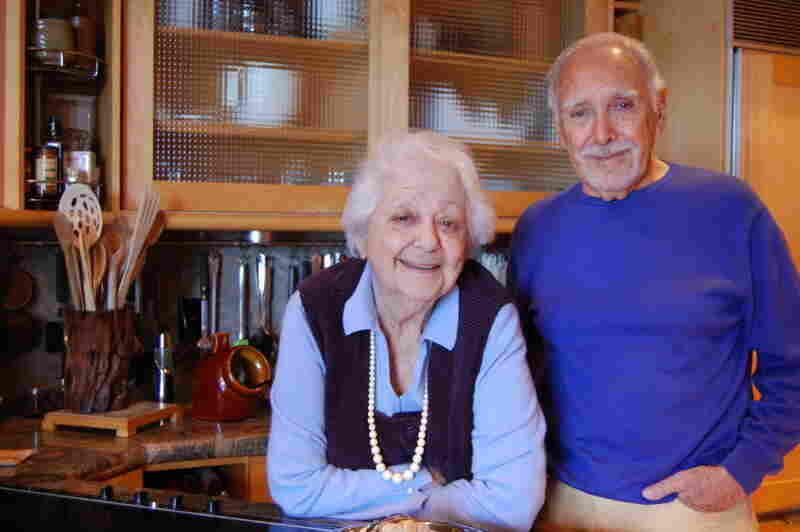 Marcella and Victor Hazan in the kitchen of their home in Longboat Key, Fla. Laura Krantz/NPR hide caption 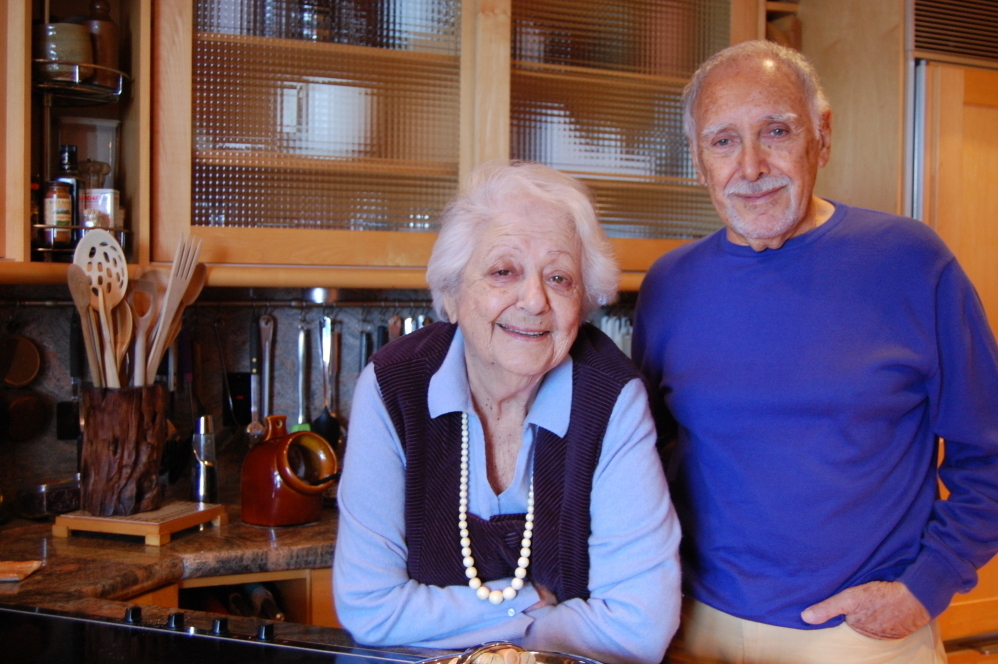 Marcella and Victor Hazan in the kitchen of their home in Longboat Key, Fla.

A month into the course, the teacher suddenly had to return to China. Marcella's classmates, eager for another class to take, asked Marcella if she would consider teaching them to cook Italian food.

She recalls getting home that day and saying to Victor, "American women are crazy. Look what they asked me."

He replied, "Well, you complain that you don't know what to do, that you have free time -- why don't you do it?"

Her first cooking classes led to a profile by The New York Times food critic Craig Claiborne. That, in turn, led to more classes and eventually brought a book publisher to Marcella's doorstep. He asked her if she had thought about writing a cookbook, and she replied that she had not. When the publisher asked why not, she replied, "Because I don't write in English."

It was Victor who convinced Marcella that a cookbook was possible. He would act as her translator and editor, and would check the recipes that his wife made up from scratch. As he edited and rewrote, he picked up on details that she sometimes overlooked.

Marcella says Victor would often come into the kitchen as she was cooking and interrupt her. "I don't know," he'd point out. "All the string beans that I eat in this house -- they don't have both ends."

More In 'The Long View' Series:

"Of course they don't have both ends," she'd reply. "I took them out."

Back and forth they went, haggling over small points. But in the end, the attention to detail is what made Marcella's cookbooks -- The Classic Italian Cookbook and six others -- so easy for people to use.

Those recipes even saved a few romances. A women's magazine ran Marcella's "Roast Chicken with Lemons." The article got an overwhelming number of responses, including a large number from women who said, "I made this dish for my boyfriend and he proposed."

The magazine re-ran the recipe, calling it "Engagement Chicken."

Those newly engaged couples had a model in Marcella and Victor.  They've now been married for almost 55 years, working partners for most of that time. Their partnership has resulted in six cookbooks, cooking schools in both the U.S. and in Italy, and a revolution in the way Americans cook -- and eat -- Italian food. 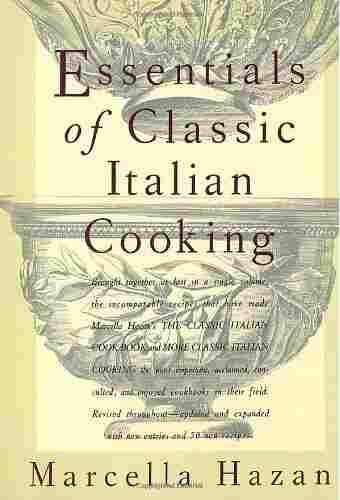 If this were a still life its title could be "Chicken with Two Lemons."  That is all that there is in it.  No fat to cook with, no basting to do, no stuffing to prepare, no condiments except for salt and pepper.  After you put the chicken in the oven you turn it just once.  The bird, its two lemons, and the oven do all the rest.  Again and again, through the years, I meet people who come up to me to say, "I have made your chicken with two lemons and it is the most amazingly simple recipe, the juiciest, best-tasting chicken I have ever had."  And you know, it is perfectly true.

2.  Wash the chicken thoroughly in cold water, both inside and out. Remove all the bits of fat hanging loose. Let the bird sit for about 10 minutes on a slightly tilted plate to let all the water drain out of it. Pat it thoroughly dry all over with cloth or paper towels.

3.  Sprinkle a generous amount of salt and black pepper on the chicken, rubbing it with your fingers over all its body and into its cavity.

4.  Wash the lemons in cold water and dry them with a towel. Soften each lemon by placing it on a counter and rolling it back and forth as you put firm downward pressure on it with the palm of your hand. Puncture the lemons in at least 20 places each, using a sturdy round toothpick, a trussing needle, a sharp-pointed fork, or similar implement.

5.  Place both lemons in the bird's cavity. Close up the opening with toothpicks or with trussing needle and string. Close it well, but don't make an absolutely airtight job of it because the chicken may burst. Run kitchen string from one leg to the other, tying it at both knuckle ends. Leave the legs in their natural position without pulling them tight. If the skin is unbroken, the chicken will puff up as it cooks, and the string serves only to keep the thighs from spreading apart and splitting the skin.

6.  Put the chicken into a roasting pan, breast facing down. Do not add cooking fat of any kind. This bird is self-basting, so you need not fear it will stick to the pan. Place it in the upper third of the preheated oven. After 30 minutes, turn the chicken over to have the breast face up. When turning it, try not to puncture the skin. If kept intact, the chicken will swell like a balloon, which makes for an arresting presentation at the table later. Do not worry too much about it, however, because even if it fails to swell, the flavor will not be affected.

7.  Cook for another 30 to 35 minutes, then turn the oven thermostat up to 400 degrees, and cook for an additional 20 minutes. Calculate between 20 and 25 minutes total cooking time for each pound. There is no need to turn the chicken again.

8.  Whether your bird has puffed up or not, bring it to the table whole and leave the lemons inside until it is carved and opened. The juices that run out are perfectly delicious. Be sure to spoon them over the chicken slices. The lemons will have shriveled up, but they still contain some juice; do not squeeze them, they may squirt.

If you want to eat it while it is warm, plan to have it the moment it comes out of the oven.  If there are leftovers, they will be very tasty cold, kept moist with some of the cooking juices and eaten not straight out of the refrigerator, but at room temperature.

From Essentials of Classic Italian Cooking by Marcella Hazan. Copyright 1992. Excerpted by permission of Knopf.