Accessibility links
Jon Stewart: America's Ruling King Of Fake News In an interview with Terry Gross, taped in front of a live audience in New York City, the Daily Show host deconstructs his upcoming "Rally to Restore Sanity" on the National Mall and explains how The Daily Show comes up with material. 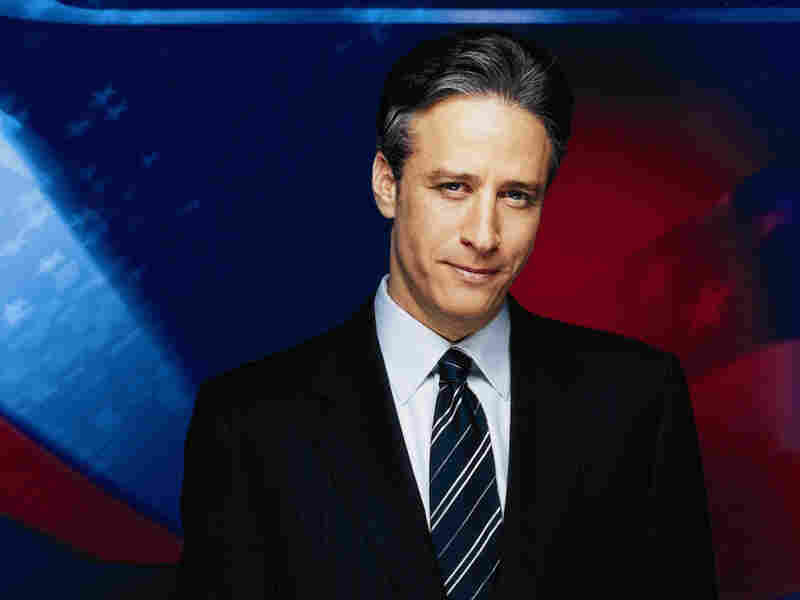 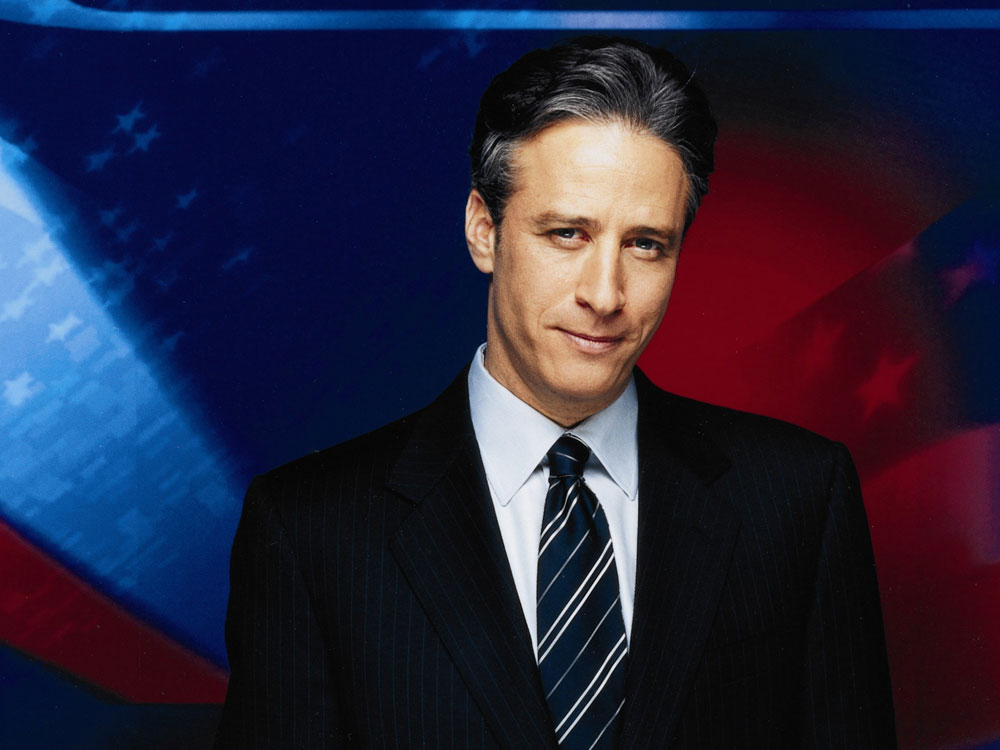 This week on Fresh Air, we're marking the year's end by revisiting some of the most memorable conversations we've had in 2010. This interview was originally broadcast on October 4, 2010.

Stewart sat down with Terry Gross on Sept. 29 in front of a live audience at New York City's 92nd Street Y to discuss his time on The Daily Show, his role in the media, and the rally -- which was billed as "Woodstock, but with the nudity and drugs replaced by respectful disagreement."

"Like everything that we do, the march is merely a construct," he says. "It's merely a format, in the way the book is a format, a show is a format ... to be filled with the type of material that Stephen and I do and the point of view [that we have]. People have said, 'It's a rally to counter Glenn Beck.' It's not. What it is was, we saw that and thought, 'What a beautiful outline. What a beautiful structure to fill with what we want to express in live form, festival form."

For the past 11 years, Stewart has been expressing his opinions nightly on The Daily Show, which consistently ranks among the top programs viewed by the 18-34 age demographic. His quick wit and biting satire have taken the once-obscure fake-news show and made it an influential voice in American humor and politics. 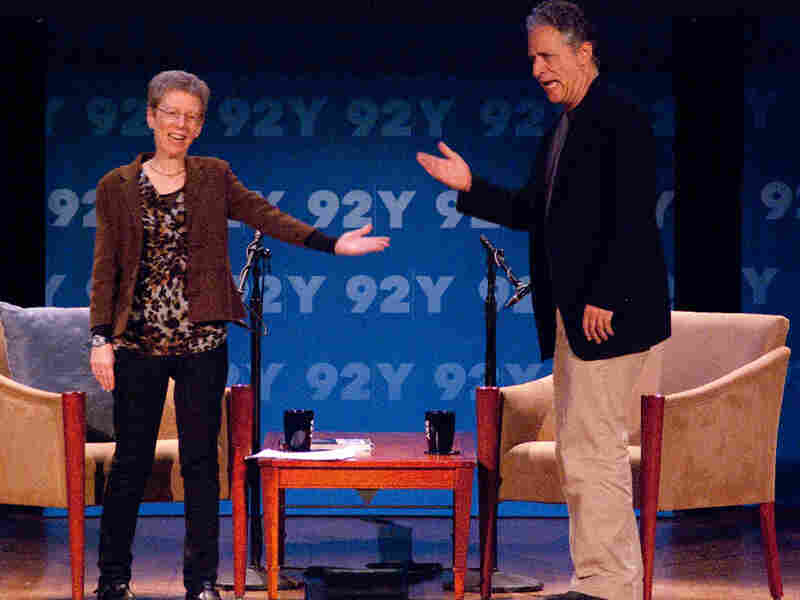 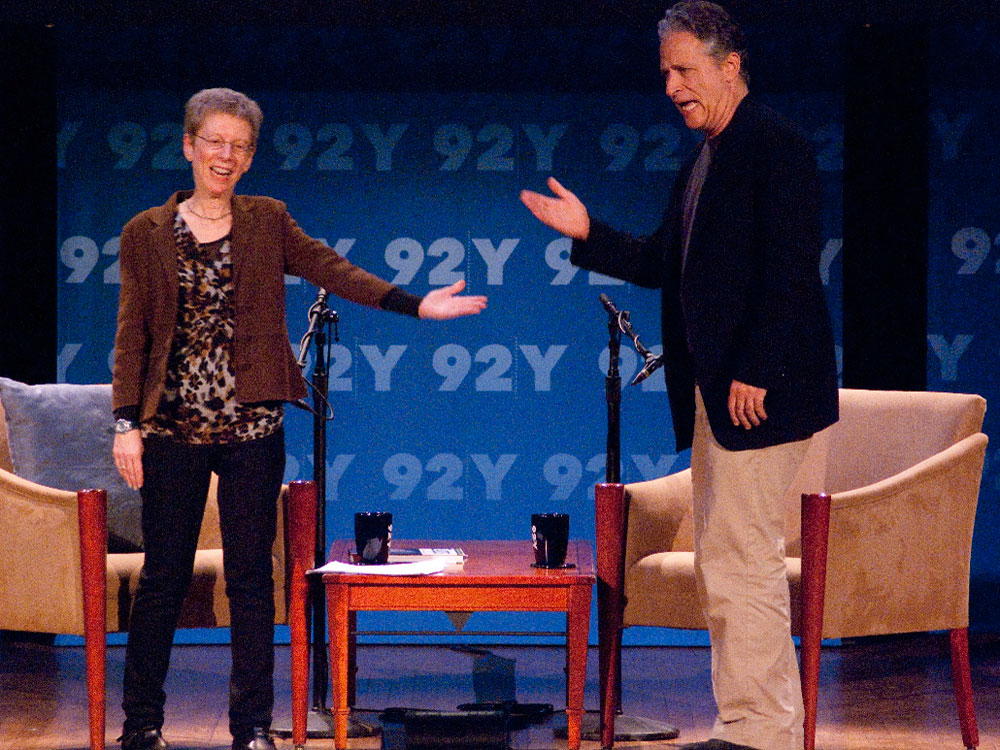 "You'd be incredibly surprised at how regimented our day is and how the infrastructure of the show is mechanized," he says. "People say, The Daily Show, you guys just sit around and make jokes,' but to weed through all of this material ... and decide what to do, we have a very strict day that we have to adhere to. And by doing that, it gives us the freedom to improvise."

The final hours before the 6 p.m. live taping are spent rewriting chunks of the script that didn't work during the dress rehearsal, or adding material that the staff has found between writing sessions. Sometimes, Stewart says, entire elements are completely reworked during the show's rewrite -- and then performed for the first time in front of the studio audience.

"He's a reaction to what he feels like is the news, and so are we. We actually share quite a bit in common in terms of, not point of view necessarily, but reason for being. We're both in some ways an op-ed. We consider ourselves editorial cartoonists in some respect. Not him, but the show. Op-ed cartoonists, or the Messiah. We're both different. I very much wanted to avoid the idea that [the march] would be a reaction to him. 'Cause I don't think that'd be fair to him and it's not meant to ridicule activism or the Tea Party movement or religious people."

"I think it made me less political and more emotional. The [more] you spend time with the political [world] and media, the less political you become and the more viscerally upset you become at corruption. I don't consider it political, because 'political' I always sort of note as a partisan endeavor. But I have become increasingly unnerved by the depth of corruption that exists at many different levels. I'm less upset with politicians than [with] the media. I feel like politicians -- the way I explain it, is when you go to a zoo and a monkey throws feces, it's a monkey. But when the zookeeper is standing right there and he doesn't say, 'Bad monkey' -- somebody's gotta be the zookeeper. I feel much more strongly about the abdication of responsibility by the media than by political advocates. They're representing a constituency. Our culture is just a series of checks and balances. The whole idea that we're in a battle between tyranny and freedom -- it's a series of pendulum swings. And the swings have become less drastic over time. That's why I feel, not sanguine but at least a little bit less frightful, in that our pendulum swings have become less and less. But what has changed is the media's sense of their ability to be responsible arbiters. I think they feel fearful. I think there's this whole idea now that there's a liberal media conspiracy, and I think they feel if they express any authority or judgment, which is what I imagine is editorial control, they will be vilified." 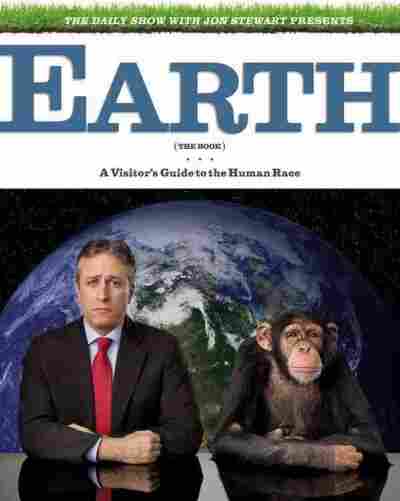