Accessibility links
Chemical Confusion: How Dangerous Is Dioxin? In 1982, the people of Times Beach, Mo., were forced to abandon their town forever because high levels of the chemical dioxin were found. At the time, dioxin was considered one of the world's most dangerous chemicals. But nearly 30 years later, the EPA still can't decide just how dangerous it really is. 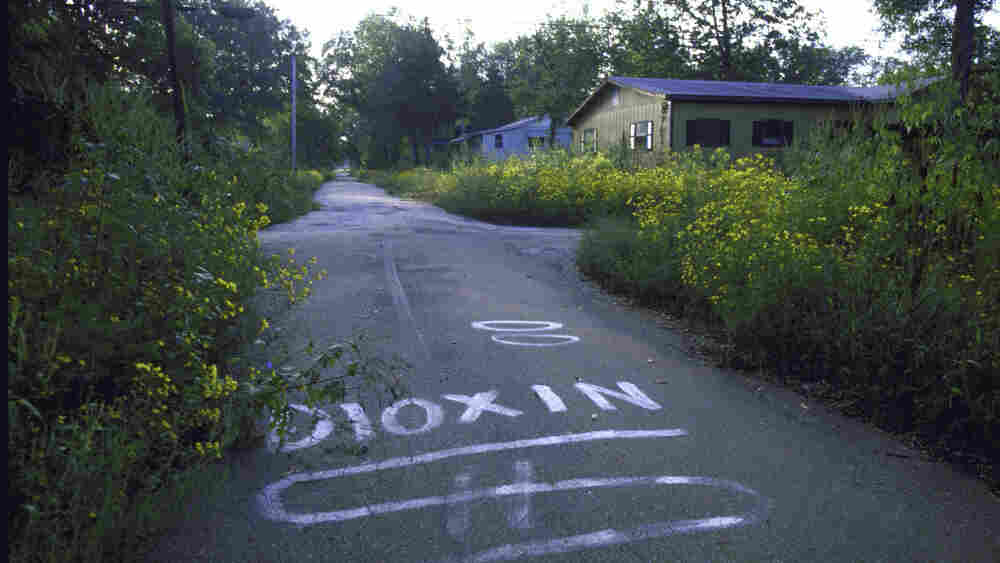 Residents of Times Beach, Mo., were forced to leave their town in December 1982 because the chemical dioxin was found in the soil. Thirty years later, the Environmental Protection Agency can't decide how dangerous the chemical is. Bill Pierce/Time & Life Pictures/Getty Images hide caption

In December of 1982, the people of Times Beach, Mo., were forced to abandon their town forever because the Environmental Protection Agency found high levels of a chemical called dioxin.

At the time, dioxin was considered one of the world's most dangerous chemicals. But nearly 30 years later, the EPA still can't seem to decide just how dangerous it really is.

One reason for the decades of uncertainty is that the agency has had to shift its emphasis from a few high-level exposures like Times Beach to low-level exposures that affect millions of people. But another reason is that EPA scientists and those outside the agency have yet to agree on how to assess the risk of cancer from dioxin.

The problem is that there is no ideal study that directly answers the question: Does dioxin cause cancer at typical everyday exposure levels, and if so, how big a risk does it pose?

Joshua Cohen, deputy director of the Center for the Evaluation of Value and Risk in Health at Tufts University

The dioxin story jumped into the headlines because of an unlikely series of events in Times Beach, which was a small town just west of St. Louis on Route 66.

Then one day, scientists discovered that many parts of the town were contaminated with dioxin. It turned out that waste oil, spread on the roads years earlier to keep down the dust, had been tainted with the chemical.

Suddenly the town was crawling with emergency workers, Leistner says. "People would wake up in the morning and see these men in their front yard in moon suits with head gear and the respirators," she says. "It was just like something from outer space."

Not long after the men in moon suits arrived, the Meramec River flooded, putting most of Times Beach under 10 feet of water.

And on Dec. 23, while residents were waiting for the water to recede, federal officials sent them a message saying their town had become uninhabitable.

The message, says Leistner, was: "if you live in the community, you need to get out. If you're outside of the community, don't go back. And don't take nothing with you."

Federal officials had taken a drastic step -- one that was based more on a hunch than on definitive science. At the time, scientists weren't sure what dioxin did to people beyond producing the skin condition chloracne, which resembles severe acne.

They knew the chemical came from industrial processes, including chlorine bleaching at paper mills, pesticide production and waste incineration. And they knew high doses caused liver tumors in rodents. 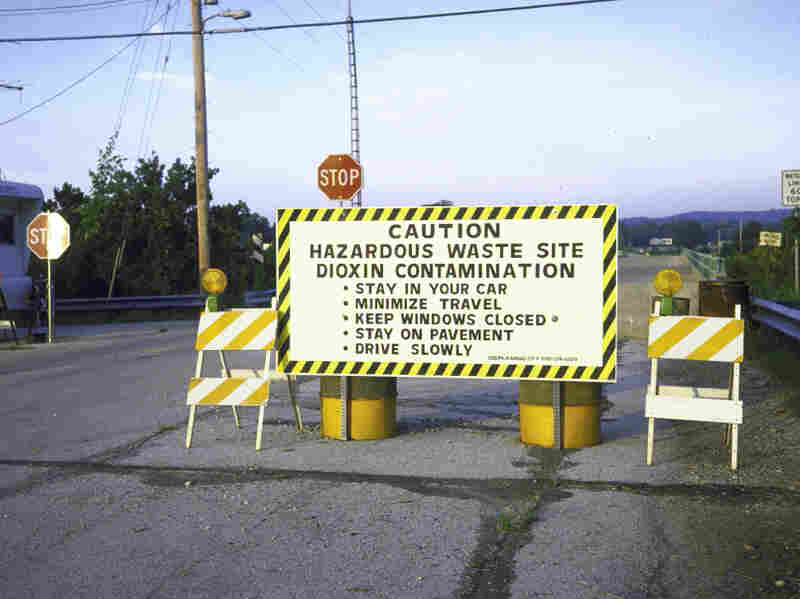 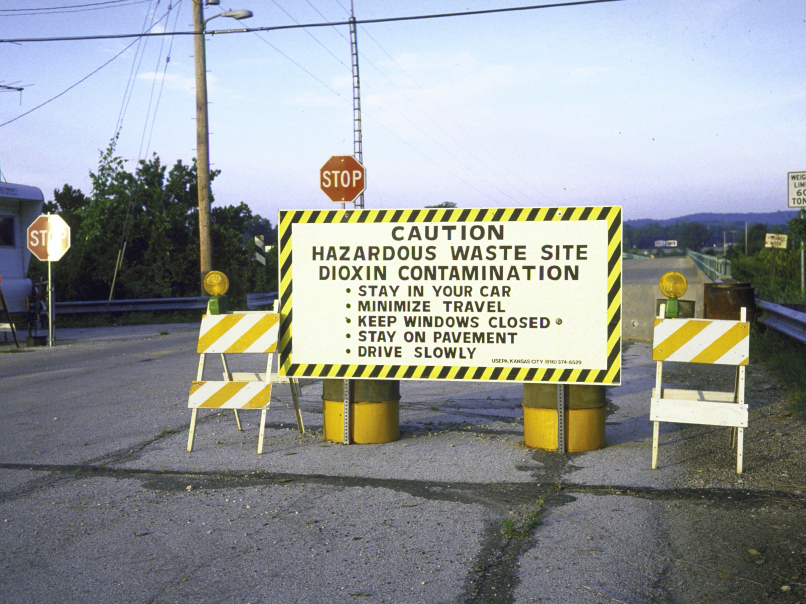 So federal officials took a cautious approach. They decided residential soil should contain less than one part per billion of dioxin. In some areas of Times Beach, levels were 100 times that high. As a result, the empty town became one of the nation's first Superfund sites.

"The first time I went to the site, I went by myself, and it was really heart-wrenching," says Gary Pendergrass, an engineer hired by the Syntex Corporation to clean up Times Beach.

"Walking around the streets, walking into the houses, many of them were like people had just simply stood up, walked out and never came back," Pendergrass says. "Plates on the tables, Christmas trees, Christmas decorations outside, and just street after street of that."

Pendergrass started the cleanup by building an earthen levy around a 10-acre site to protect it from future floods. Inside the levy, he built buildings to store soil and a massive incinerator to remove dioxin from the soil.

"It was quite an operation," Pendergrass says. It involved 300 workers at its peak, cost more than $100 million, and took until 1997 to finish. Pendergrass and his crew demolished the houses and buried the rubble. They put 265,000 tons of soil through the incinerator.

How Dangerous Is Dioxin?

And while the years ticked by, the EPA continued to try and figure out what health hazards dioxin really posed at Times Beach, Love Canal and other Superfund sites.

By this time, there were lots of studies on animals -- and a growing number on people who had been exposed to dioxin in industrial accidents or on the job.

That research clarified some things about dioxin, says Joshua Cohen, deputy director of the Center for the Evaluation of Value and Risk in Health at Tufts University. Cohen was also a member of a committee assembled by the National Academy of Sciences to review the EPA's assessment of risks from dioxin.

Research in the 1980s and 1990s did a good job addressing the question of whether high-level exposures at places like Times Beach put people's health at risk, Cohen says. "I think we have the answer to that question, and the answer is yes."

So the EPA had been right to worry about Times Beach.

But by the time this became clear, the agency was finding very low levels of dioxin all over the place -- and it was coming from sources like people burning trash in their backyards. That created a whole new challenge for the agency, one it still is struggling to address.

"The problem is that there is no ideal study that directly answers the question: Does dioxin cause cancer at typical everyday exposure levels, and if so, how big a risk does it pose?" Cohen says

How best to answer that question is something EPA scientists and outside researchers have been arguing about for decades. The agency's scientists have decided to extrapolate cancer risk from studies of workers exposed to high levels of dioxin, Cohen says.

"For example, at exposure levels one-tenth as high as those experienced by workers, EPA would assume that the risk is one-tenth as large," he says

On that basis, every bit of contaminated soil in the country would pose a risk.

But Cohen and many other scientists outside the EPA say that's the wrong approach for dioxin and some other chemicals.

Walking around the streets, walking into the houses, many of them were like people had just simply stood up, walked out and never came back. Plates on the tables, Christmas trees, Christmas decorations outside, and just street after street of that.

They say that because of the way these chemicals behave in the body, there's a threshold below which the risk of cancer disappears. If that's true, there would be no reason to worry about exposure in most places.

In 2006, Cohen and other members of the National Academy of Sciences committee added their voices to those already calling for the EPA to reconsider its position that dioxin risk had no threshold.

By then, the agency was knee-deep in studies of dioxin, says George Gray, a toxicologist who was in charge of the science and technology arm of the EPA at the time.

"The dioxin report, when it's just printed out on a printer, is probably 2 1/2 feet tall," Gray says. "There are huge amounts of information here that have to be assembled, assimilated, integrated and somehow put together to tell a story that the agency can use to help inform decisions it has to make. And it's hard."

Gray, who is now at George Washington University, was among those who thought EPA scientists should pay more attention to the outside researchers.

A Threshold For Chemical Exposure?

Late last year, the agency released a proposal to make the acceptable level of dioxin in soil even lower. And in May of this year, EPA scientists offered their latest rejection of the threshold approach to cancer risk.

That stands in stark contrast to European regulators and the World Health Organization, who decided a decade ago that dioxin did have a safe threshold. As a result, they accept exposure levels much higher than the EPA's proposed standard.

All the arguing in the U.S. has delayed regulation for so long that it's no longer as important as it once was, says Gray.

"In many ways, our dioxin problem is going away," he says. "Emissions of dioxin are down 90 percent over the last 20 years. The biggest sources are now uncontrolled backyard burning that people are doing out in rural areas on their own. It's not industry. It's not paper mills. It's none of the traditional sources. They've cleaned up."

But the EPA's actions still could have a big effect on places like Times Beach, which is now known as Route 66 State Park.

If the agency adopts its proposed lower goal for soil, the site might have to be dug up and cleaned up all over again.