Accessibility links
Shawn Camp: Taken Off The Shelf Nashville singer Shawn Camp has had numerous Top 10 hits, but they've all been sung by other country stars, including Garth Brooks, Josh Turner and George Strait. Sixteen years ago, Camp had his own shot at country music stardom, but his second album was shelved -- until now. 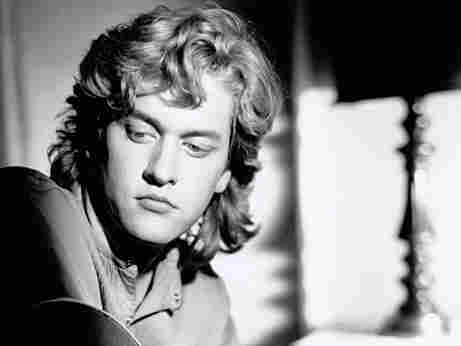 Shawn Camp's latest album is named after the year it was almost released: 1994. Courtesy of the artist hide caption

Shawn Camp is a Nashville songwriter who's had more success than most. He's released five albums of his own, and country music stars such as Garth Brooks, Josh Turner and George Strait have turned his songs into Top 10 hits. Sixteen years ago, Camp had his own shot at country music stardom, but his second album was shelved -- until now.

Shawn Camp is wearing a blue-and-white Western shirt -- the same one he wore on the cover of his debut album. It fits nicely nearly two decades later. The 44-year-old waits self-consciously while a man in black praises him to the songwriters, business folk and journalists packed into a listening lounge at Warner Bros. Nashville. He is label President John Esposito, and he says, "I apologize for 16 years of the failure of this building, but it's out tomorrow. So, ladies and gentlemen: Shawn Camp!"

Camp was a fiddle and guitar prodigy from Arkansas whose songwriting got him into an elite Music City fraternity soon after he moved to town in 1987. By just his early 20s, he was collaborating with legends such as John Prine, Cowboy Jack Clement and Guy Clark. Then, amid the go-go early '90s, Camp found himself with a record deal on Warner's Reprise label.

His first album produced a couple of charting singles and earned critical praise. Then he turned in his second project, which hewed even closer to his traditional country and bluegrass influences. Unfortunately, that's not the direction country radio was heading.

Clear As A Bell

The Grandpa That I Know

"Then the head of the label said, 'Shawn, the head of promotions is telling me there's no hits on this album. So maybe you ought to rethink that and go in and take all the fiddles and dobros off and put electric guitars on it, because it don't sound like the current John Michael Montgomery record,' " he says.

Camp says he bridled at compromising his sound. Months went by, and at last Camp sent his manager in with an ultimatum: "Ask them for a release date for the album or release me from the label, 'cause something's got to change," he says. "They said, 'We'll let you go.' So that's what happened."

Camp calls the next few years a low point for him as a recording artist, but by 1997, his songs began finding their way to country radio. He landed a No. 1 single with the top-selling artist at the time, Garth Brooks. And more traditional performers began recording Camp songs by the score, such as bluegrass veteran Del McCoury.

By 2000, Camp thought he'd made enough money from his songwriting successes to buy the master of his lost second album back from Warner Bros.

"They wanted an astronomical amount for it," he says. "More than I could afford. So I figured I'd just wait it out."

Camp says he wasn't sure what he was waiting for, but it turns out it was the aforementioned John Esposito. The veteran New York music executive was just learning the very different culture of country music and Nashville when he heard Camp at a guitar pull.

"Which is the name they give for when you're sitting around a campfire or some sort of setting like that, and several guitarists will be there, and each will sing a song," Esposito says. "I didn't know who he was. I didn't know what songs he had written. But it was so obviously magic to me that I had to pay attention. I wasn't actually sitting there thinking I was going to sign him as an artist, by the way. I was just thinking he was mesmerizing."

They got to talking later. Esposito wanted to know Camp's story.

"I said, 'Well I used to be on the label that you now run. I've got a record over there that's never been released,' " Camp says. "And he said, 'Well, I'm going to go to the vault and find your records and listen to them.' "

Esposito was impressed, especially by the lost album's last track. One of Esposito's deputies suggested releasing the album, and he did, under the title 1994, in late September.

"I have probably heard from more people about doing this, and how happy they are to see somebody would do this, than anything I've ever done in my music-business career," Esposito says. "Because I've discovered that Shawn is beloved by this entire community and people outside of this community. And sometimes releasing a Shawn Camp can make people look at your label in an even more positive way."

This, even though country radio today sounds even less like Camp's style than it did 16 years ago.

"I didn't move to town to be on that chart with the people I was on the chart with, honestly. I wanted to be on the chart with George Jones and Roger Miller and Merle Haggard and Johnny Cash," Camp says. "If I was going to be the singer in the band or be playing songs in a country band, I wanted it to be old-school country as much as I could."

Camp says losing that record deal was probably a blessing. He says he has little confidence that his younger self would have handled stardom well. And he might not have spent those years honing his songwriting craft and proving that there's more than one way to make it in Music City.