Accessibility links
Lone-Wolf Plots Alter Anti-Terrorism Strategy An increasing interest in violent jihad in the U.S. coincides with al-Qaida's move toward smaller attacks. The group has called on affiliates to launch <em>any </em>attacks, and that call is expected to grow louder next year. Experts say law enforcement officials have decided the best way to battle this growing threat of homegrown terrorism is to confront the suspects directly. 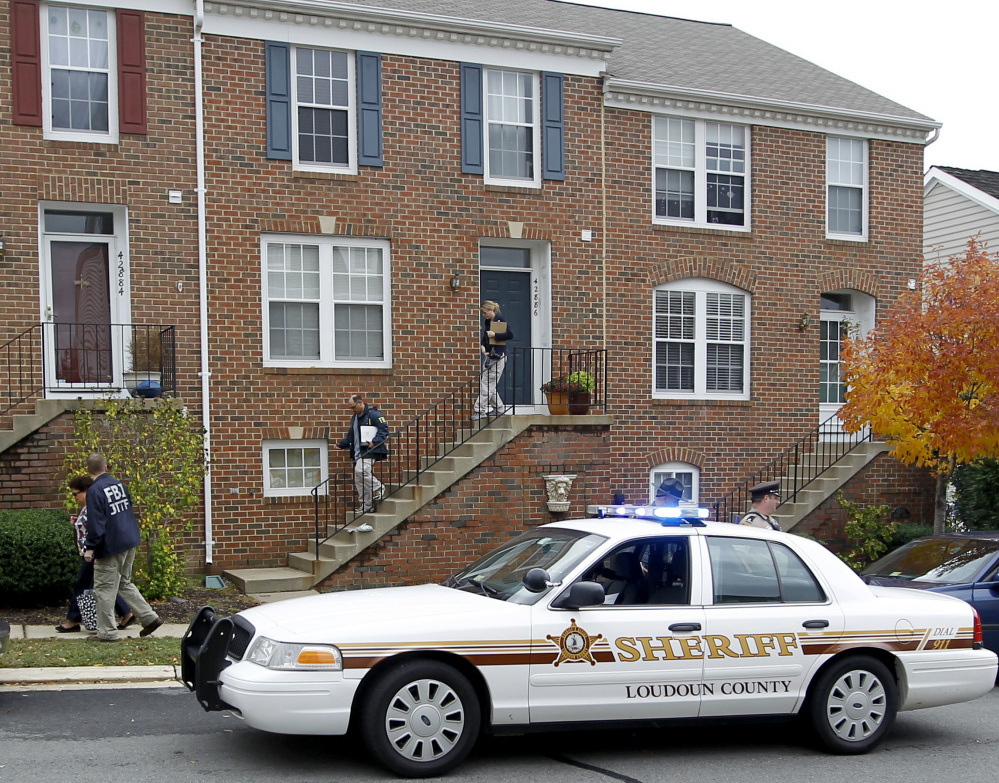 FBI and law enforcement investigators leave the home of Farooque Ahmed in Ashburn, Va., on Oct. 27. Ahmed was charged with trying to help people he believed were al-Qaida operatives plan to bomb subway stations around Washington, D.C.

This year ended with a flurry of terrorism sting operations. A young Somali-American in Oregon was arrested after he allegedly tried to ignite a car bomb at a Christmas tree lighting ceremony in Portland. A Virginia man was arrested after he allegedly conspired with people he thought were al-Qaida operatives to bomb D.C.-area targets. And authorities say a Baltimore man unknowingly was working with undercover FBI agents when he detonated a dummy car bomb outside a U.S. military recruitment center.

The three plots had two things in common: They were launched by lone-wolf attackers, and the FBI was in the middle of them. Experts say to expect more undercover cases in 2011, because the agency has clearly decided that the best way to battle the growing threat of homegrown terrorism in this country is to confront the suspects directly.

"I believe that we have something in this country that you don't see characterized in TV shows," says Philip Mudd, a former counterterrorism official with both the CIA and the FBI, who is now a research fellow at the New America Foundation.

"It is not cells or clusters of individuals that are like-minded ... it is clusters of kids who are talking about extremism," he says. "I think this exists across the country. Kids are talking about what they don't like in Palestine or Iraq or Afghanistan, and within those clusters occasionally you're going to have a couple who say, 'All my friends, all our friends are talking, why don't we do something about it?' "

As it turns out, this increasing interest in violent jihad in the U.S. coincides with al-Qaida's smaller scaled aspirations. Pinned down by drone attacks in the border region between Pakistan and Afghanistan, the group's leadership has been calling on affiliates to launch attacks -- any attacks. And that call is expected to grow louder next year.

I think regional affiliates will get more aggressive precisely because al-Qaida central is being pressed so hard in South Asia.

"I think regional affiliates will get more aggressive precisely because al-Qaida central is being pressed so hard in South Asia," says Bruce Hoffman, a terrorism expert at Georgetown University. "So the current terrorist strategy ironically is at once a product of our own success and indeed of their own resiliency. Even under this intense pressure, they are able not only to survive, but evolve a different strategy."

Former Homeland Security Secretary Michael Chertoff says that in its own way, a less ambitious al-Qaida is a dangerous development.

"I'm concerned that what's happened is that the terrorists, al-Qaida and similar groups, have finally decided that there is still value in smaller, less sophisticated attacks," says Chertoff, who now heads his own security firm. "So they are looking at a broader set of targets, and that means, frankly, it will be harder to detect and stop those attacks. If you look at their public comments, they talked about how they are now looking at economic impact as part of the benefit of a terrorist attack, and that suggests to me they are going to be trying to hurt our commercial businesses in the way they previously focused on mass casualties."

2011 holds special significance to al-Qaida for another reason: It marks the 10th anniversary of the Sept. 11, 2001, attacks.

There hasn't been a successful major attack against the U.S. since then, and officials say that rankles al-Qaida's top leadership. Osama bin Laden is said to be keen to launch something spectacular so the U.S. can't say it has beaten back the terrorist threat for a decade.

In the words of one high-ranking terrorism official in the Obama administration: "Nothing focuses minds in al-Qaida like a symbolic anniversary, and we're about to have a big one. The last thing they want is for former President Bush or President Obama to be able to stand at ground zero and say it has been 10 years since a strike. I think al-Qaida will do all it can to make sure that doesn't happen."