Accessibility links
Flushing Out Lead, Metals With Chelation Therapy Health care providers use chelation therapy, which draws out toxic levels of heavy metals, like lead, from the body. But some parents are turning to home-based chelation kits and over-the-counter pills, which doctors say can be more dangerous.

Sherri Oliver lives in a small town on the Eastern Shore of Maryland. It's a two-hour bus ride to get to the Mount Washington Pediatric Hospital in Baltimore -- and she has brought her daughter, Katie Dail.

Katie has dangerously high levels of lead in her blood.

She's a fast-moving first-grader with copper-colored hair. Katie has bright brown eyes but has trouble making eye contact. She also has autism -- and she doesn't really speak, but she makes a kind of whooping sound when she's happy.

But Katie is not here for autism treatment. The treatment she has been getting -- chelation therapy -- is to get her lead levels down. Although hospitals offer the treatment, some desperate parents are turning to home-based chelation kits and over-the-counter pills, which doctors say can be more dangerous.

Lead can cause serious behavioral problems in kids and lower their IQs. When Katie's lead levels are high, she gets irritable and has more trouble learning, her mom says.

"She takes all my time," Oliver says.

Katie was first diagnosed with an elevated lead level at age 2.

Lead in the body is notoriously hard to get rid of. It seeps into the bones to hide, and sneaks across the blood-brain barrier, affecting mood, focus and sleep.

Last year, Katie stayed in the hospital for 19 days while nurses worked to bring her lead levels down through chelation.

Chelation puts a special chemical into the body that binds to lead and other heavy metals, and helps flush them out. But it's not pleasant. And it has to be given repeatedly over the course of the hospital stay.

"It's nasty stuff. But it had to be done," Oliver says. 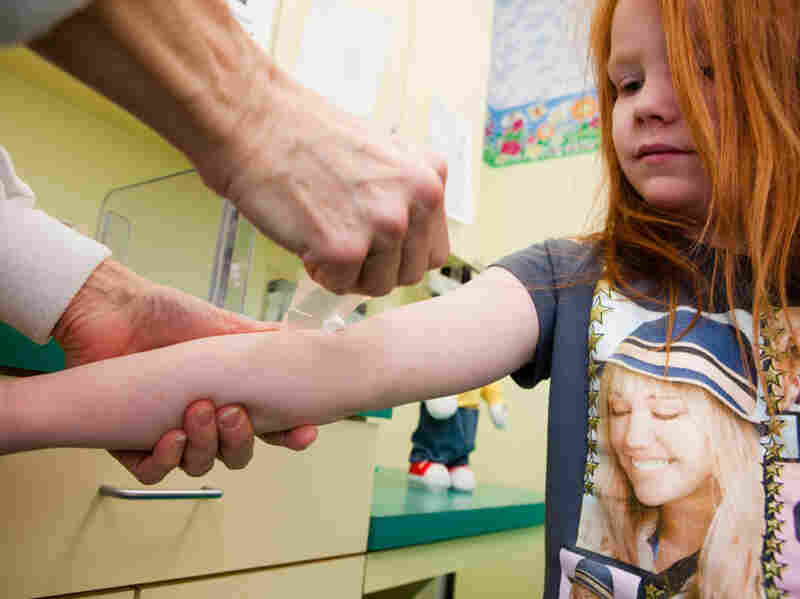 A nurse applies a numbing cream to Katie's arm so she can draw blood to check her lead levels. Katie's levels have gone down since her last visit, but as she grows, her bones release more lead into her blood. Maggie Starbard/NPR hide caption 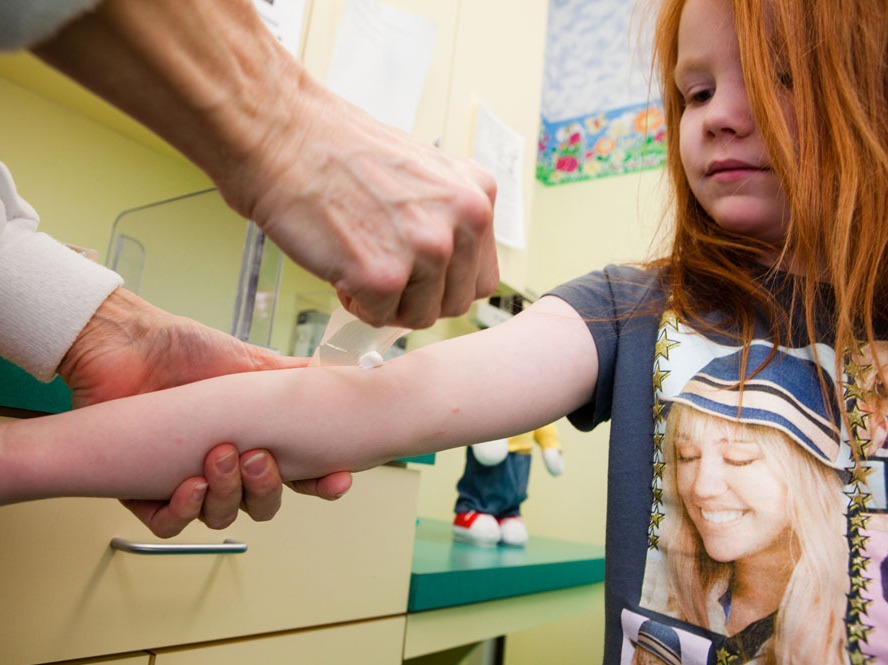 A nurse applies a numbing cream to Katie's arm so she can draw blood to check her lead levels. Katie's levels have gone down since her last visit, but as she grows, her bones release more lead into her blood.

"You ever been near a building when they're getting their roof done, you know, and the smell just gets in your mouth? That's what it smells like," she says.

They had to grind up Katie's pills and hide them in apple juice. She still won't drink apple juice, Oliver says.

But nurse practitioner Barbara Moore, who runs the lead clinic at Mount Washington, says getting past the smell is just one of the challenges of chelation.

Plus, the chelation process doesn't clear all of the metal out at first -- it only brings it out from the bone to the blood. Some people test higher for lead after the treatment until it flushes from their system.

And, importantly, it doesn't cure the damage the metal has already done to the brain.

"What we try to do is prevent any further damage," Moore says.

In the U.S., about 250,000 kids a year under age 5 have high levels of lead in their blood. Only a small percentage of them test high enough to need chelation.

While the overall numbers of lead poisoning and chelation therapy are going down, it's still a problem in cities with old homes like Baltimore, and when people get secondhand toys that may contain lead. It's also a problem in some rural areas where lead persists in the soil, Moore says.

Moore sees between five and 10 chelation patients a year in her hospital.

"Things that we look at is how long had they been exposed to lead, and how high was their lead level," she says.

She says kids who put a lot of non-food items in their mouths have an increased chance of developing the classic symptoms of lead poisoning: behavioral problems, headaches and sleeplessness.

The clinic helps educate families on what to do to decrease their risk of lead poisoning.

"We really do a lot of education on cleaning toys, cleaning household items ... using vacuums that have HEPA filters," Moore says.

Moore says it's especially hard to keep an eye on the symptoms of kids with learning disabilities like Katie. Katie puts nearly everything in her mouth, from the coffee cup that a stranger left on a table to the corners of walls in her home.

When Moore brings Katie and her mom into an exam room, Katie watches TV while Moore listens to her breathing and reads her chart. Moore talks to Katie's mom.

But there's still a chance that Katie might have to go into the hospital for more chelation if things don't improve.

Recently, a new challenge has cropped up for Moore and her staff -- chelation kits for sale on the Internet. These products -- which run the gamut from clay baths to pills to test kits --  claim to let consumers cure autism or Alzheimer's or hardening of the arteries without professional medical help.

One website claimed its chelation product corrects neurological damage and gets rid of mercury. Some autism advocates say mercury causes autism, but there is no scientific proof of that. Experts say chelation is not an effective autism treatment.

"I don't recommend the oral chelation that you can get over the Internet or over the counter. We don't know what the safe level is of administering to a child or to anybody else, really," she says.

These products haven't been properly tested for any diseases other than heavy metal poisoning. In fact, the National Institutes of Health halted a study of chelation as an autism treatment, citing too much patient risk. But the NIH is studying chelation for hardening of the arteries. Results are expected to be announced in 2012.

"We are very concerned that the marketers of these products are preying on the most vulnerable of consumers," he says.

He's talking about consumers like Sherry Oliver who have very sick kids without many treatment options. The FDA is concerned that people will put their health at risk by using the therapies and delay seeking appropriate medical treatment.

Before Oliver left the clinic, I asked her if she ever considered one of those online chelation kits.

"I actually looked into that and, no, absolutely not. Most of them -- I couldn't find out what was in them, where they were from, who made it, nothing," Oliver says.

Katie and her mom bundle up for the long ride home. They'll be back to the hospital in a month to get Katie's lead levels checked again.