Accessibility links
Passions And Potions: Donizetti's 'The Elixir of Love' Donizetti's unassuming comedy serves up magic elixirs and romance -- and a couple of solid insights. It demonstrates that, when it comes to love, the genuine article beats any potion-induced passion.

Passions And Potions: Donizetti's 'The Elixir of Love'

From La Fenice In Venice 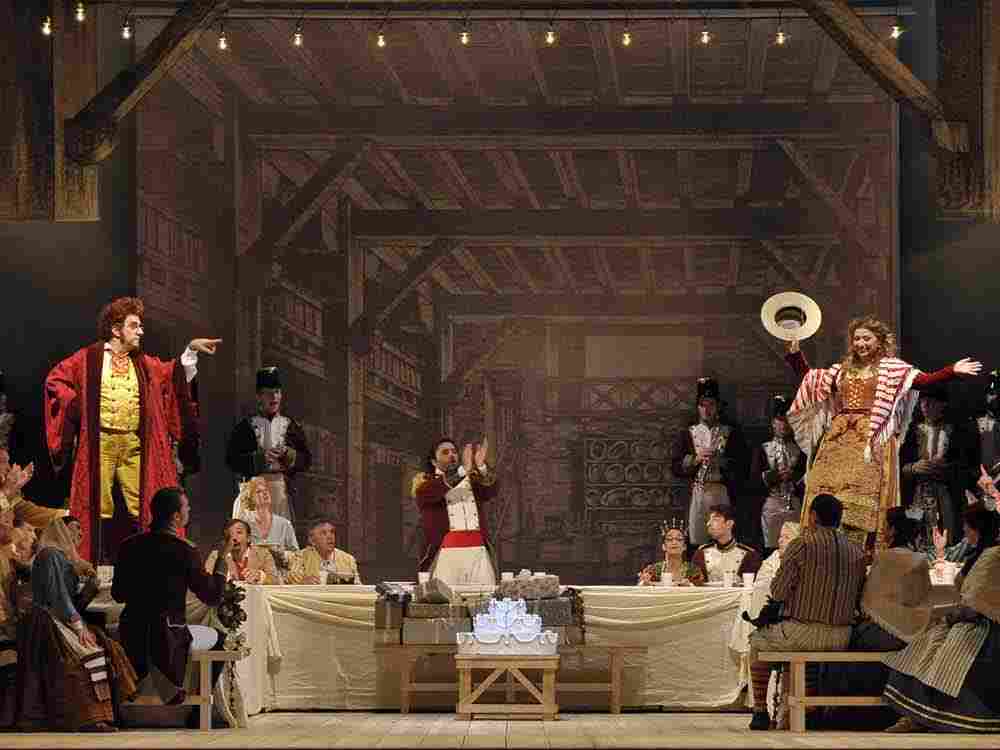 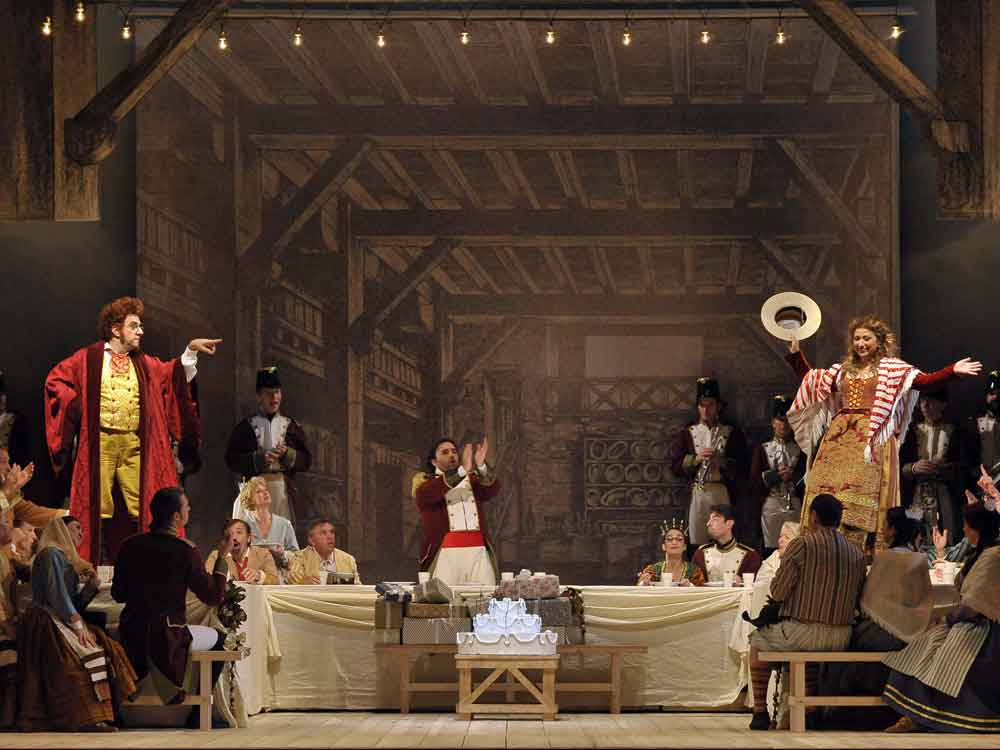 In Act Two, Nemorino (tenor Celso Albelo) sings the bittersweet aria "Una furtiva lagrima." He sees "one secret tear" in Adina's eye, a sign that he may still have a chance with her, and says he'd sooner die than be with any other woman.

Nemorino and Adina (soprano Désirée Rancatore) finally realize their true feelings as she sings this spectacular aria -- after buying back his military enlistment papers -- urging him to stay at home, where he is loved.

'Prendi, per me sei libero'

Love potions -- or at least hopeful notions of love potions -- have been around for a long time. And why not? The pleasures of romance can be painfully hard to come by, and the idea of a magic formula that turns endless frustration into instant passion can be pretty appealing.

Not surprisingly, love potions have turned up everywhere, from ancient fables to 1950's pop songs. Remember "Love Potion No. 9," by the Clovers? And while love potions also play a role in any number of operas, there are two that stand out above the rest -- and they couldn't be more different.

Based on a medieval legend, Wagner's emotionally driven Tristan and Isolde features an elixir that actually works, but with dire consequences. The romance that ensues leaves one lover deceased and the other demented.

Donizetti's The Elixir of Love, isn't nearly so intense. It's a lighthearted romp, featuring a phony love potion that's nothing but a bottle of cheap, red wine. Still, along with all the laughs, Donizetti's unassuming comedy does serve up a couple of solid insights. It demonstrates that, when it comes to love, the genuine article beats any potion-induced passion. And it suggests that, when searching for a magic formula to stimulate the libido, human foibles can make placebos safer and more effective than any mysterious elixir.

On this edition of World of Opera, host Lisa Simeone presents a production of The Elixir of Love starring tenor Celso Albelo and soprano Desiree Rancatorel, from the storied theater La Fenice, in Venice, Italy.

The Story of 'The Elixir of Love' 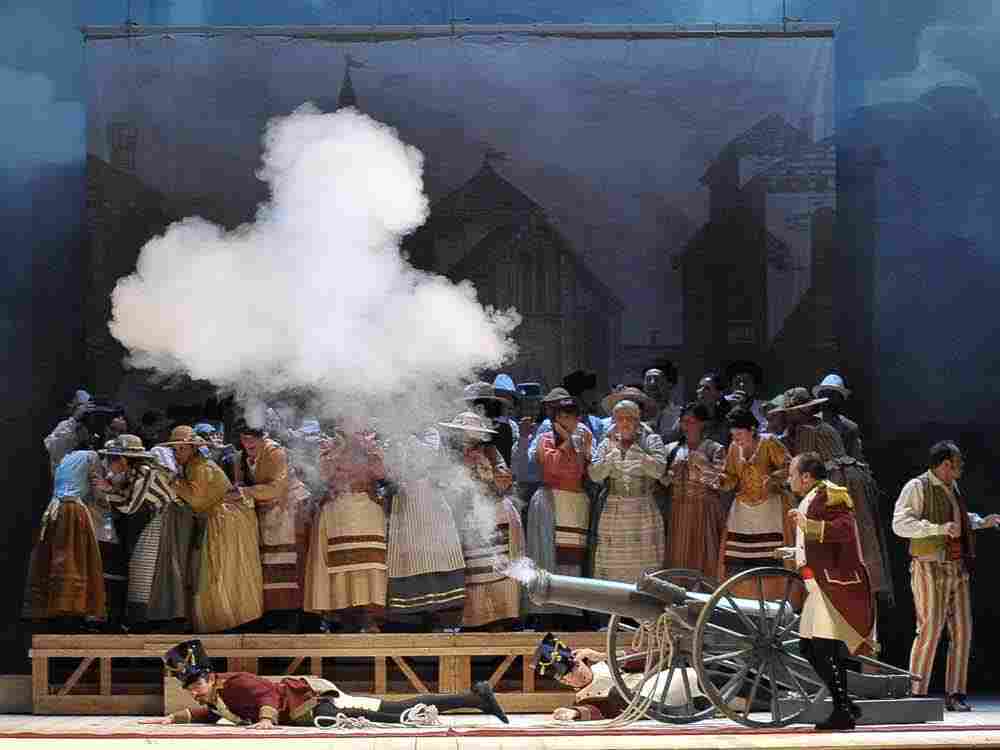 A cannon goes off on the set of "The Elixir Of Love" at La Fenice theater in Venice. Michele Crosera hide caption 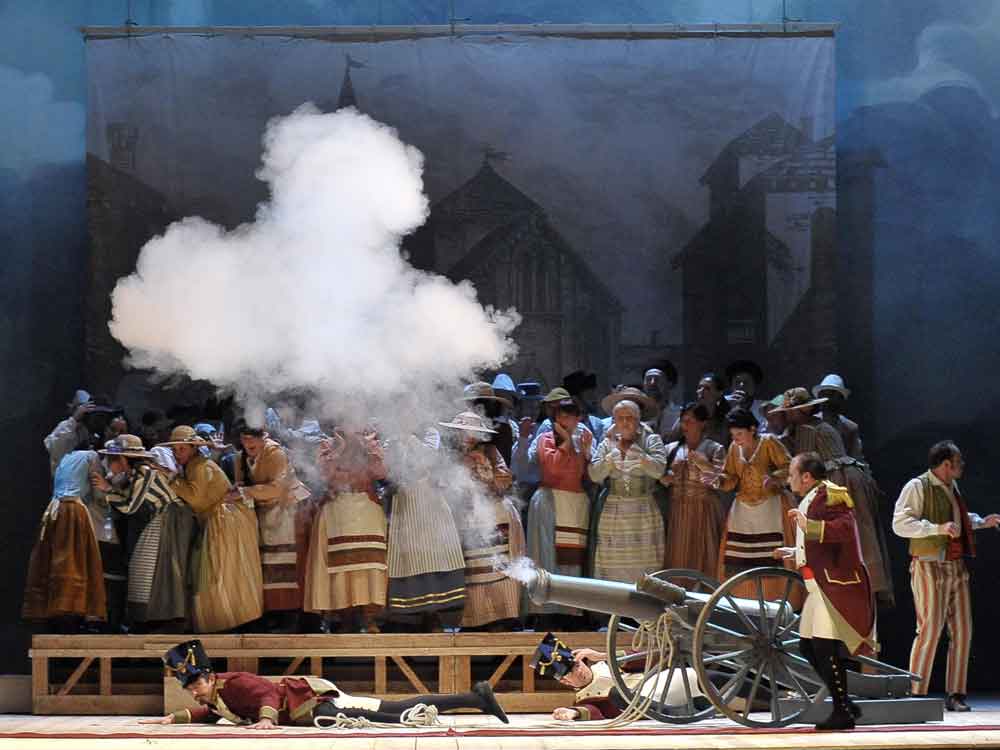 A cannon goes off on the set of "The Elixir Of Love" at La Fenice theater in Venice.

ACT ONE: Adina, a farm owner in northern Italy, tells her workers the ancient story of Tristan and Isolde, and their powerful love potion. She finds the idea of a love potion intriguing, but laughable. One of the workers is a kind soul called Nemorino. He's in love with Adina, and thinks he just might need a magic elixir to win her over.

Also on the scene is a dashing soldier named Belcore. He's quite the ladies man, and turns his brazen attentions to Adina. She warns him not to be overconfident -- but she's plainly taken with him, much to Nemorino's dismay. Nemorino tells Adina, for the umpteenth time, that he'd die for her. She tells him to knock it off, and says she could never love him.

All this makes Nemorino a perfect customer for Dr. Dulcamara, a newcomer in town. He's a traveling salesman peddling his wares. His biggest seller is a love potion -- which is actually just some re-packaged red wine. Nemorino buys Dulcamara's sales pitch, and a bottle of the potion. Dulcamara tells him he should drink it right away, but it won't take effect for 24 hours -- giving Dulcamara plenty of time to skip town.

Nemorino guzzles the wine. It has no effect on his desirability, but it does make him more confident. He's sure that when the 24 hours have passed, Adina will be his. But this confidence doesn't last long. He soon learns that Adina has agreed to marry Belcore that very night. While everyone else is celebrating the news, Nemorino is crushed.

ACT TWO: The feast to celebrate Adina's wedding is well underway, with the ceremony to follow shortly. A notary arrives to finalize things, but Adina puts him off. She wants Nemorino there, and he's nowhere to be found, so the ceremony is postponed.

As for Nemorino, he hasn't given up yet. He wants to buy more love potion from Dulcamara, but he's broke. Belcore comes to the rescue, telling Nemorino that if he enlists in the army, he'll immediately get a bounty. Nemorino signs the papers, takes his payment, and spends it all on Dulcamara's elixir. 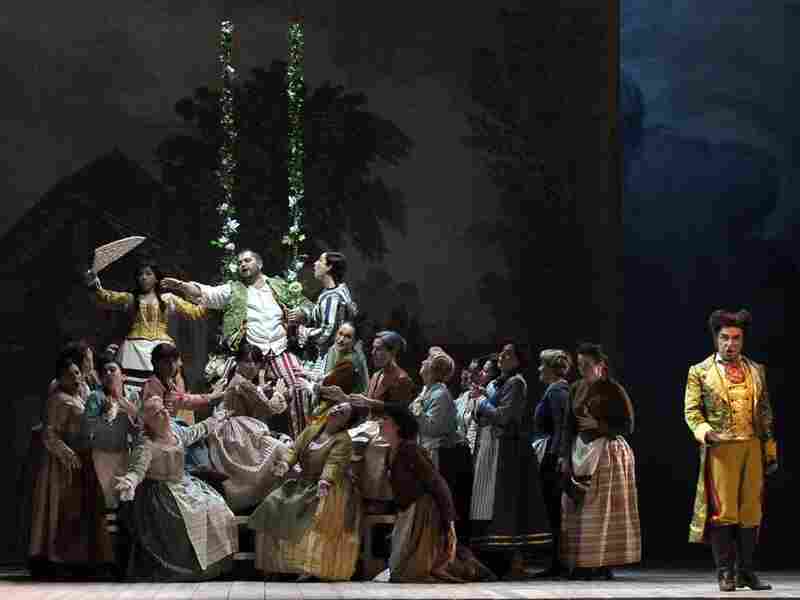 When Nemorino drinks the love potion, he suddenly finds himself surrounded by adoring women -- though not for the reason he thinks. Michele Crosera/La Fenice hide caption 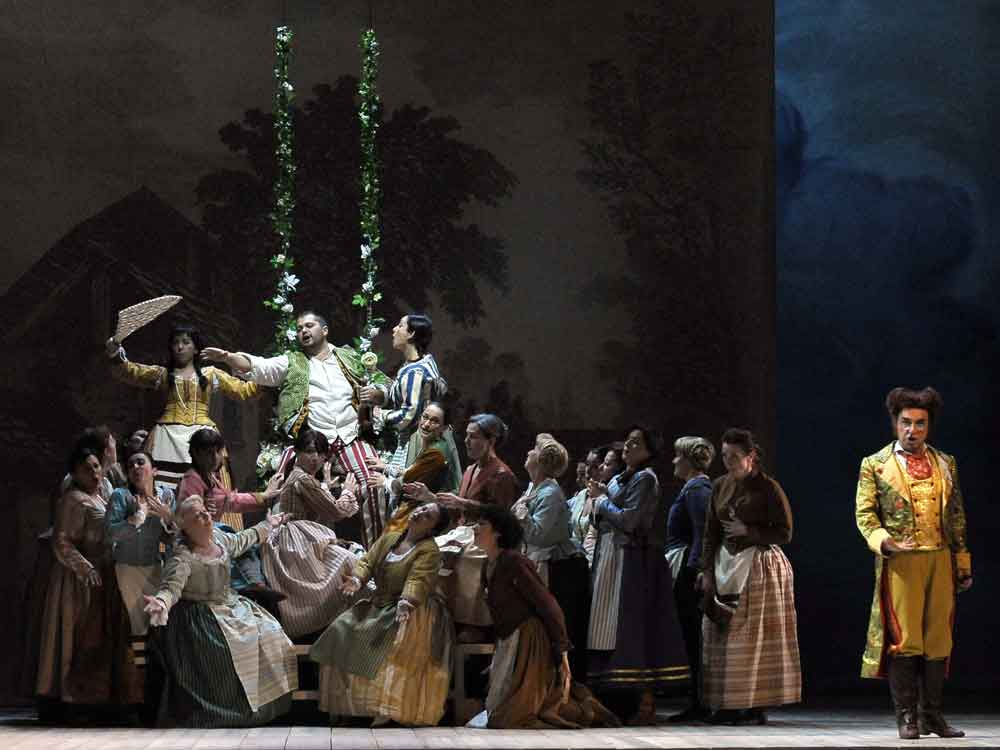 When Nemorino drinks the love potion, he suddenly finds himself surrounded by adoring women -- though not for the reason he thinks.

Before long, Nemorino finally gets a break -- though it has nothing to do with the potion. Some local peasant girls have learned that Nemorino's rich uncle has died, and left Nemorino all his money. Suddenly, he's the most popular bachelor in town. But Nemorino hasn't heard about his uncle yet. He assumes his unexpected popularity is the potion taking effect.

When Adina finds Nemorino surrounded by young women, she's amazed as well, and even she begins to see him in a different light. She buys Nemorino's enlistment papers back from Belcore, and presents them to Nemorino. Despite his sudden success with the ladies, he tells her he'd rather die than have any woman but her. Hearing that, Adina realizes that she's loved him all along, and the two agree to be married. Dulcamara looks on with great excitement. Convinced that all this is the result of his product, he eagerly leaves town to market the elixir elsewhere.