Accessibility links
Dubai's Okryu-Gwan Restaurant Offers A Taste Of North Korea A North Korean restaurant in Dubai provides a taste of Pyongyang for those who may never get there, and hard currency for the regime. It's tiny compared with the venerable original in Pyongyang, but the noodles are a hit -- and the waitresses sing. 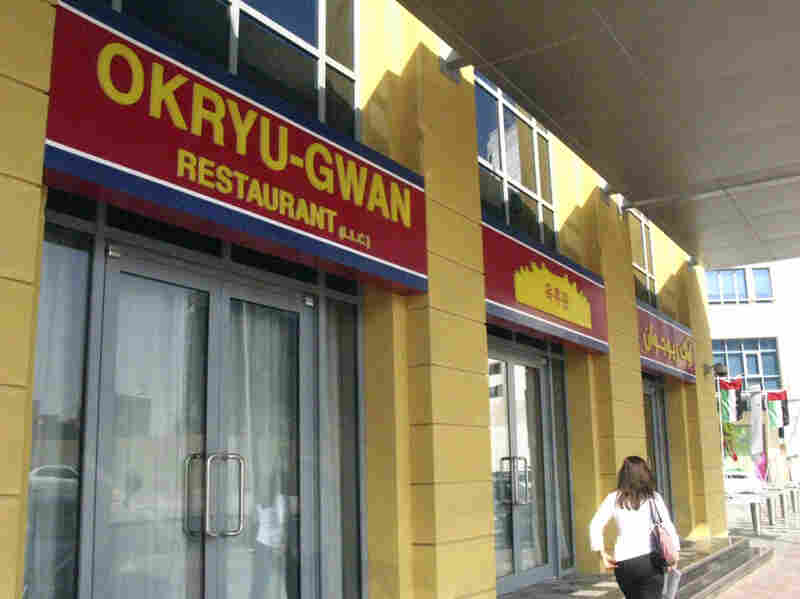 The Okryu-Gwan restaurant in Dubai is a rare import from North Korea. The restaurants serve as an important source of hard currency for Pyongyang. Other branches are in China, Nepal and Thailand. Peter Kenyon/NPR hide caption 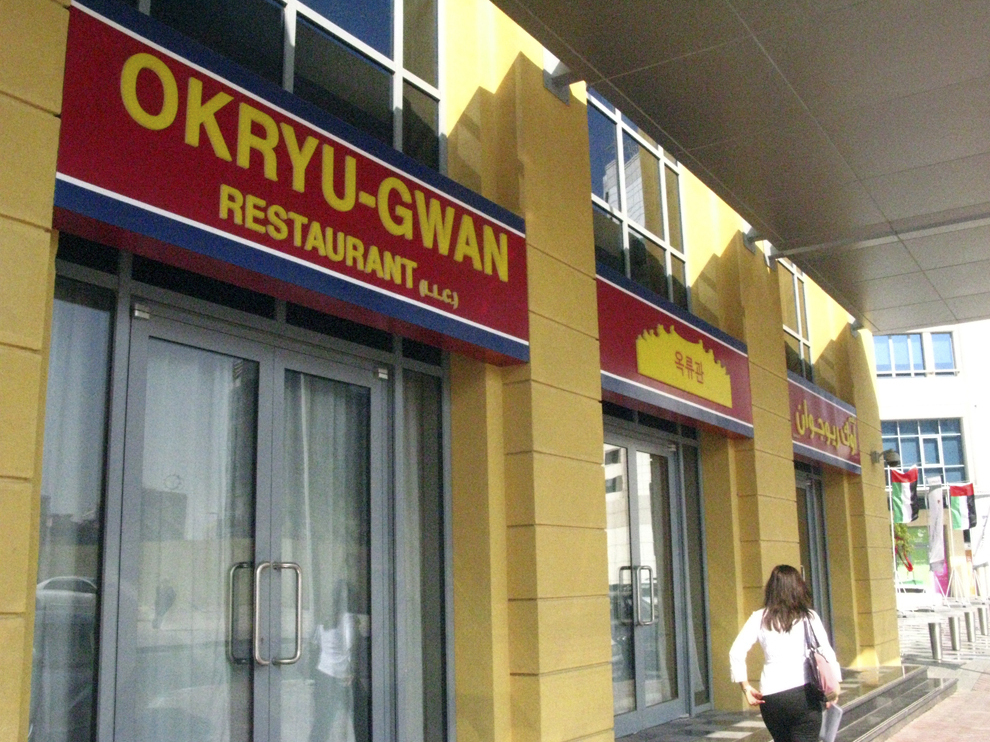 The Okryu-Gwan restaurant in Dubai is a rare import from North Korea. The restaurants serve as an important source of hard currency for Pyongyang. Other branches are in China, Nepal and Thailand.

North Korea's best-known exports tend to be conventional weapons and nuclear technology. But now, curious diners can add to noodles to that list, thanks to a chain of North Korean restaurants in China, Nepal, Thailand and Dubai.

Analysts say the restaurants are a prominent source of foreign exchange for Pyongyang, which struggles under economic sanctions for its nuclear program -- and for its sometimes belligerent behavior toward South Korea.

The Dubai branch of the Okryu-Gwan restaurant is tucked into the corner of a nondescript business park in Dubai's Deira neighborhood. In the dining room, the all-female staff is dressed in colorful gowns and robes. Most speak decent English and are happy to guide newcomers to Pyongyang cuisine through the menu.

The signature naengmyon cold noodles are recommended, but the menu is extensive, with varieties of kimchi, the pickled cabbage dish popular on both ends of the Korean peninsula, as well as Korean meat and fish dishes. It's not quite as spicy as they do it in Seoul, says one waitress pressed for the difference between North and South Korean cooking.

As the food begins to arrive, a synthesizer strikes up a theremin-sounding introduction, and soon the waitresses are onstage, belting out Korean songs and decades-old American pop.

The Okryu-Gwan restaurants are an important source of hard currency for Pyongyang, says Marcus Noland, a North Korea expert with the Peterson Institute for International Economics in Washington, via e-mail.

Since so few North Koreans get to travel, Noland says, being picked to work in the restaurants is a plum assignment.

Potential staff members are thoroughly vetted for political reliability, he added, and pressure may be used against family members to minimize the risk of defection. But as long as the restaurants meet their monthly revenue quotas, the regime tends not to interfere.

Dubai's Okryu-Gwan is tiny compared with the cavernous original in Pyongyang, which recently celebrated its 50th anniversary. The official North Korean news agency reported that leader Kim Jong Il himself provided "on-site guidance" when the restaurant added a 60,000-square-foot extension.

The foreign branches do have their advantages, however: Unlike the average North Korean, I did not have to endure a lengthy waiting list to purchase a ticket from my work unit to get in.