Accessibility links
Favorite Books Of 2010: Linda Holmes Selects 'The Baseball Codes' The Baseball Codes is a fascinating look at the unwritten rules of baseball and the way they're enforced -- from a ball in the ribs to a hotfoot in the locker room. 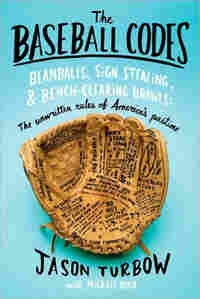 The Baseball Codes is an entertaining, exhaustive look at baseball's unwritten rules, seen from inside the game. hide caption

So here we are on the last day of the year, and it's time for my favorite book of 2010 -- for which I can thank Monkey See contributor Glenn McDonald, who wrote about it for the blog in March.

The Baseball Codes: Beanballs, Sign Stealing, and Bench-Clearing Brawls: The Unwritten Rules of America's Pastime (yes, its title has two colons, but they're earned) is a wildly entertaining book about baseball, threading the needle perfectly in that it talks about the game with love without collapsing into the purple "on a dusty diamond doth man find his true heart" kind of stuff you find far too often in baseball writing.

It's really about professional baseball as a society. And it's a society that has rules, customs, expectations, hierarchies, and etiquette that most people -- even fans -- don't entirely understand. The business of a pitcher hitting a batter and another batter being hit in retaliation is amateur stuff, sophistication-wise. Here, writers Jason Turbow and Michael Duca get into much more complex sequences of payback and code enforcement. Sure, pitchers do much of the enforcement work through the built-in advantage of being entitled to throw a ball at a person at 90 miles an hour. But baserunners take out infielders, batters throw bats, fielders apply "hard tags" -- there are lots of ways to be punished if you break one of the unwritten rules.

And those rules themselves form the most fascinating part of the book, because they are firmly rooted in the idea of respect, despite the fact that they may make little or no sense to people not in the game. Players and coaches quoted in the extensively sourced text disagree, for instance, about when the rule against running up the score kicks in and what it involves (not bunting? not running the bases aggressively?), but most of them agree that there is some point at which you stop trying quite so hard to score. How can that be? The losing team is still trying to come back; why wouldn't you keep trying to get further ahead? These are the mysteries of largely closed societies.

There is a furtive glee in the way some of these stories of lawmaking and lawbreaking are presented: a story of an epic brawl between the Padres and the Braves makes it seem embarrassingly stupid, but also quotes Goose Gossage who, in his autobiography, called it "the best, most intense baseball fight I've ever seen or been involved with." And that's after the book explains that the fight started because Atlanta's starting pitcher intentionally conked a Padres hitter and the Padres' pitching staff had trouble conking him back. It's theoretically a terrible story of a lot of guys acting like fools, but when a fan throws a cup of beer and a player watching in the broadcast booth because he's on the disabled list runs to the locker room to put on his uniform so he can run on the field and fight? That's a little funny, also.

There are a staggering number of people quoted in this book -- good guys, bad guys, coaches, players, umpires -- and they all have wonderful stories. It's not about glorifying hitting guys with fastballs for staring admiringly at their own home runs, for instance, but it is about explaining that this is a fundamental part of how professional baseball works, and if you don't get it, you're going to get hit a lot.

It's a terrific book, whether you particularly care about baseball or not.