Accessibility links
These Architects Designed A Nation The architecture firm of McKim, Mead and White built some of this country's greatest buildings, from the original Penn Station in New York to Washington's National Museum of American History. 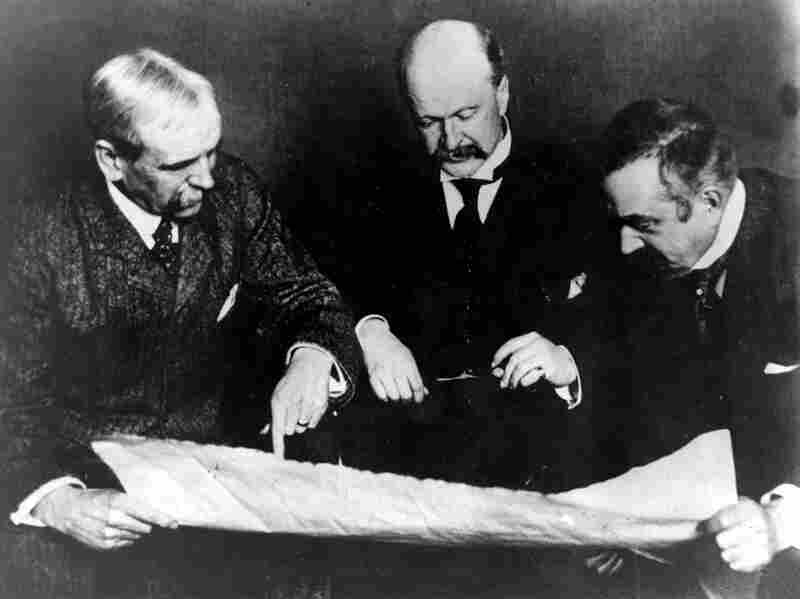 In the late 1800s, Charles Follen McKim, William Rutherford Mead and Stanford White founded an architecture firm that would go on to define the look of a booming young nation. AP hide caption 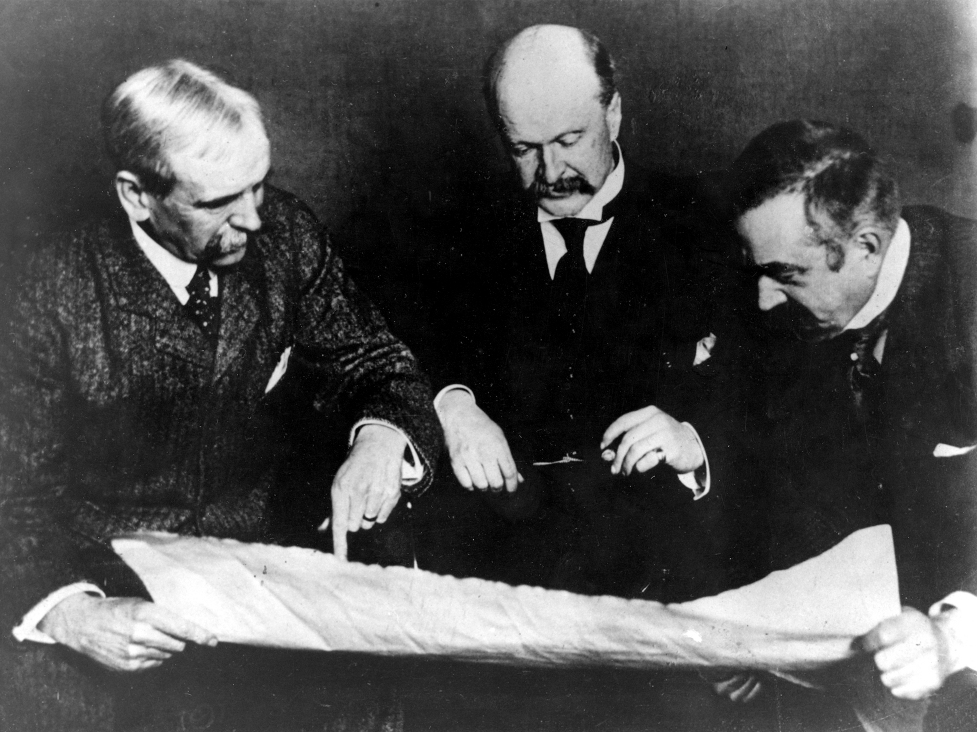 In the late 1800s, Charles Follen McKim, William Rutherford Mead and Stanford White founded an architecture firm that would go on to define the look of a booming young nation.

The architecture firm of McKim, Mead, and White defined the look of Gilded Age America.

Charles McKim, William Mead and Stanford White designed New York's original Penn Station. They built mansions in Newport, R.I., for robber barons and industrial tycoons. They were even invited to renovate the White House in 1903.

Stanford White may be best known today for the scandal surrounding his murder-- he was shot by the jealous husband of a former lover-- but 100 years ago, he and his colleagues were designing a nation. 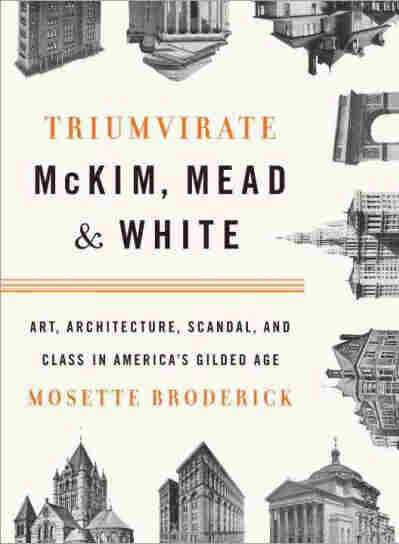 A Bridge Between The Old World And The New

Architecture professor Mosette Broderick tells NPR's Jacki Lyden that the three men took much of their inspiration from Europe, at a time when traveling to Europe could be a grueling ordeal.

"Thirty-foot waves! No fresh food! No baths," says Broderick. But that didn't stop McKim, Mead, and White from traveling all over the continent. "They see the first world; they see the old world; they see things that are medieval, things that are Baroque, the Roman amphitheater at Arles," and as trans-Atlantic travel grew easier, they began to bring some of this architectural booty home with them.

"They see themselves as a huge Santa Claus, with a backpack," says Broderick, "and they put the buildings and the style and the things that they can buy in this backpack, and bring it to the Americans."

Ready To Be Barons

When the three men first crossed the Atlantic, America was still relatively unsophisticated. "We were basically a rural nation, with little wooden houses in the country. Not country houses!"

But by the time McKim, Mead, and White set up their architecture firm, Broderick says, their customers were ready for a touch of European grandeur.

"They didn't work very well with the Edith Wharton set," she says. "They worked for the new money, and the new money wanted to be barons, and these buildings made them barons."

In the early 1890s Columbia College and New York University moved to the northern region of the city to create campuses that they hoped would give them academic credibility. Two Roman domes built upon upon hilltops in New York, two libraries built to preserve the thoughts of the ages; two magnificent buildings meant to shape the identity of recently acquired wealth in the nineteenth century. The two colleges prepared to take themselves seriously. For their physical presence, both college presidents turned to the most prominent architectural firm in America, McKim, Mead & White, to give their respective schools a vision for the future.

One might think that each school would want a different architect, but the partnership had two distinct personalities, that of McKim and that of White. Stanford White's commission came first from his father's college, New York University, which had given him an honorary degree despite the fact that Stanford had not even completed high school. McKim's work at Columbia followed as he edged out the other competitors for the new campus. McKim, whose college career was limited to a single year at the Harvard Scientific School, had no Columbia connection. The two men designed for what were, in reality, impoverished institutions hoping for a donor to make at least the central temple of learning, the library, a centerpiece of the new schools. Who were these men who transformed the colleges of New York?

The name of the architectural firm McKim, Mead & White is almost a household word in America. The practice, which was synonymous with bringing American buildings to a level of design equal to that of contemporary Europe, helped to establish the creation of beauty as a goal for builders of individual structures as well as of whole cities during the Gilded Age. These men who played a major role in shaping the ethos of beauty in America grew, as did the nation, from modest native stock to figures of international reputation.

Charles Follen McKim, William Rutherford Mead, and Stanford White hardly seemed destined for fame. All were born a half generation before the Civil War, all were of intellectual but modest backgrounds, and all had personalities sufficiently flawed to make their destiny seem a surprise. Perhaps it's even true that none was for long a talented designer. It was the synthesis of their association and their lifelong loyalty to one another that made this firm almost the brand name of architecture in turn-of-the-century America.

The eldest of the three, William R. Mead, remains enigmatic to this day. Known to his partners, affectionately, as "Dummy,"* Mead described himself as the rudder of the ship, the man who kept his partners from making "damn fools" of themselves. These comments were correct. It was Mead who kept McKim, Mead & White afloat from its first days, guiding the firm through a major disaster and into the modern world.

A taciturn soul deliberately insistent on keeping a low profile, Mead avoided the social life pursued to a frenzy by his partners. Moreover, he married out of the loop, selecting as a bride a Hungarian- born woman, Olga Kilyeni, who had no connections to potential clients in the United States. The couple had no children. Mead had no burning personal cause; indeed, he humorously noted in old age that his partner McKim, who stressed that physical exercise was the key to good health, died young, while his partner Stanford White had been true to his motto of a short life and a happy one. Mead just worked hard, had a quiet, perhaps boring life, and long outlived the others.

Abolition was the cause that united many of those in the parental circle of McKim, Mead & White, and brought them some early clients. No one fought the good fight better than James Miller McKim, whose role in the abolitionist movement was his life. Stanford White's narcissistic fop of a father also embraced the antislavery cause. Among the firm's early contacts, Augustus Saint- Gaudens, William Henry Furness, Henry Villard, Frederick Law Olmsted, Frederick F. Thompson, Theodore Roosevelt, and Russell Sturgis all knew each other from events connected to the rejection of slavery. Indeed, only Mead's family's position toward slavery is unknown, although it was probably liberal. As children, McKim, Mead and White grew up with the war's noises just out of earshot. They were to turn the fervor of their parents' abolitionist zeal into the cause for beauty, carrying the banner of art forward as their parents had done with that of freedom for the slaves.

*The nickname probably came from the game of whist, in which three can play a dummy version rather than the expected four players. While we are not clear about the exact meaning of the term to the three partners, the name is certainly humorous and self- mocking. It probably refers to Mead's lack of loquaciousness as well as the constantly changing moves of the three men. 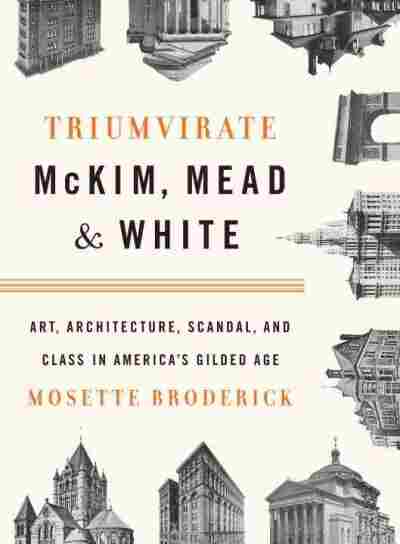