Accessibility links
A Hidden World Inside New York's Great Post Office The Farley Post Office covers two city blocks. Thousands of people once worked there, but now it's largely abandoned. Inside is a whole forgotten world, complete with cafeteria, medical wing, photo studio and even a jail. 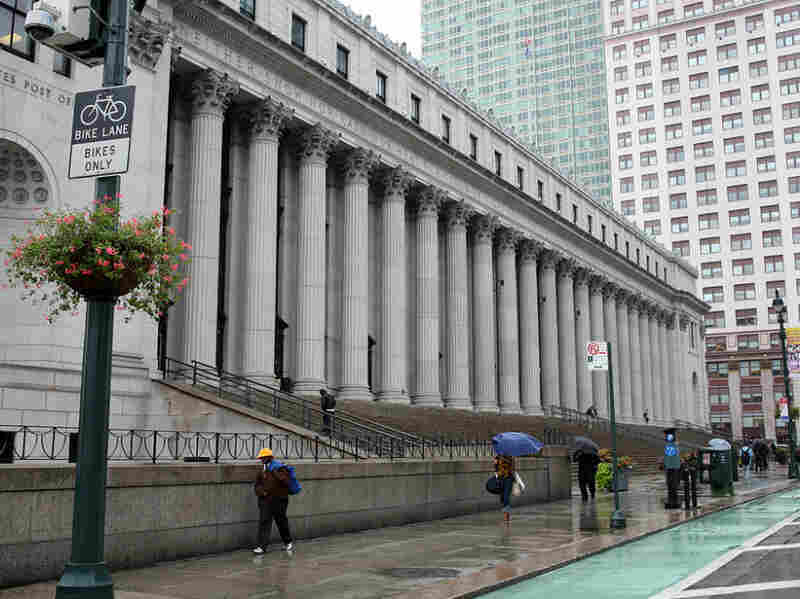 You can still mail a letter at the Farley Post Office, but most of the huge structure is deserted. Nick Carr hide caption 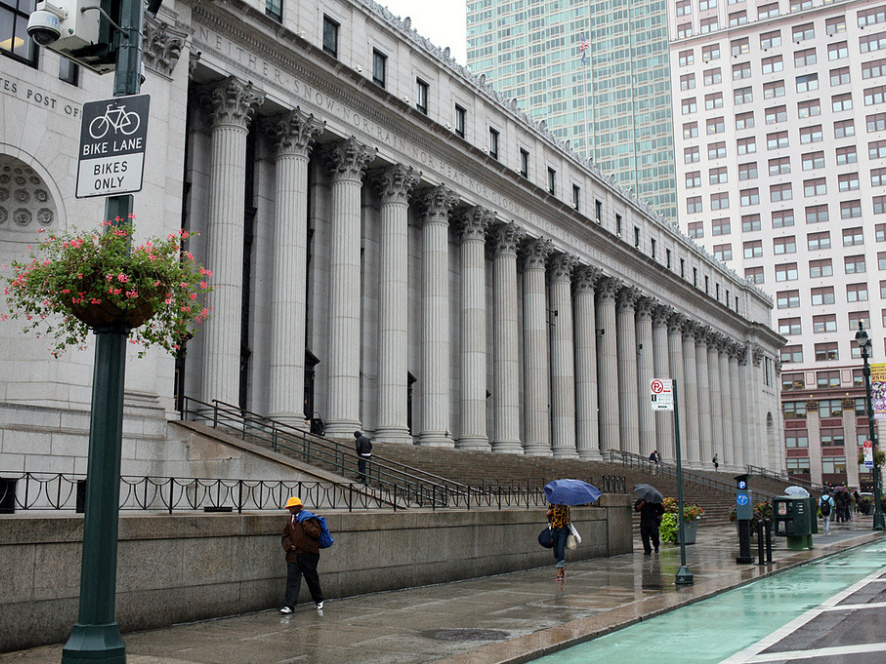 You can still mail a letter at the Farley Post Office, but most of the huge structure is deserted.

Across the street from Penn Station, in the heart of midtown Manhattan, is the enormous and imposing Farley Post Office.

Designed in 1912 by the famous architecture firm of McKim, Mead and White, the Farley building covers two square city blocks. You can still climb its marble staircase to mail a letter, but there's very little left behind that grand facade.

"I love the fact, among many, that you walk by it every day and you have absolutely no idea that 95 percent of it is completely empty," says film location scout Nick Carr, who has written about the post office on his blog, Scouting NY.

Five thousand people once worked in the building, and after years of being largely abandoned, thousands of people will fill it once again -- this time on their way to catch a train.

See more of the Farley Post Office at Scouting NY

The general mail sorting facility will be transformed into a train hall, says Tim Gilchrist, president of the Moynihan Station Development Corp.

Gilchrist has been working for more than 15 years to turn the abandoned post office into a train station that will take some of the load off of Penn Station. "This will serve all of the Amtrak service throughout the northeast corridor," he tells NPR's Jacki Lyden.

The Farley Post Office was a self-contained city within a city, with a medical wing, photo studio, cafeteria, fitness room, even a jail for any miscreants who tried to meddle with the mail.

Parts of the building have no electricity, so Carr lights the way with his iPhone during a recent tour. On the wall of the medical center, he points out an electronic bird-repeller, which he presumes must have been used to shoo away pigeons.

The medical center was the epicenter for keeping the thousands of people in the building healthy, he says.

"You can almost feel the souls of those people still walking around today," he says. "There's so much history to it."

Footsteps echo in the dark, quiet hallways. But in a few years, the open, empty spaces will be filled with busy commuters.