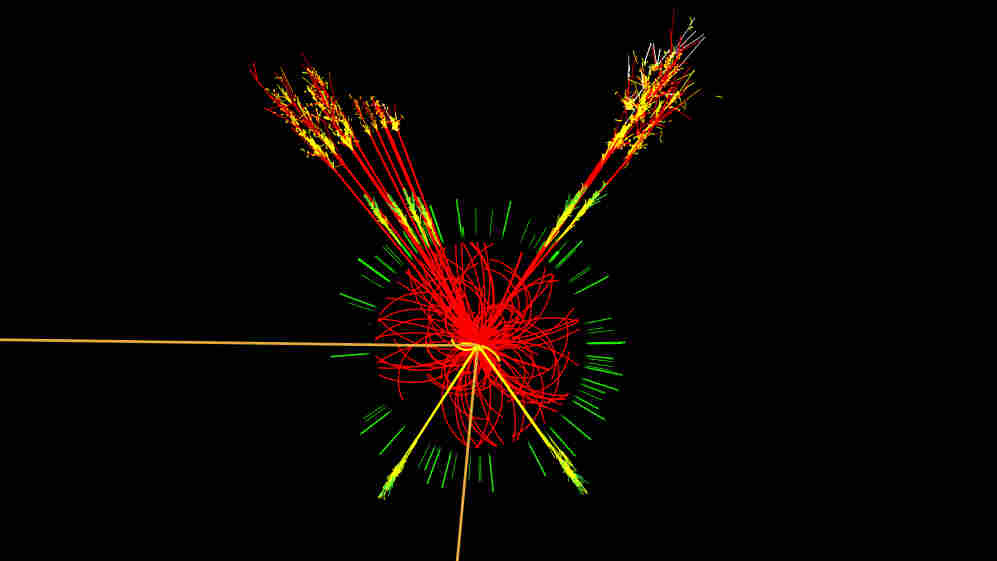 This is what researchers at the ATLAS detector at the Large Hadron Collider expect data from a Higgs boson to look like. The Higgs boson is the subatomic particle that scientists say gives everything in the universe mass. ATLAS Experiment/CERN hide caption

Deep beneath the border of France and Switzerland, the world's most massive physics machine is sending subatomic particles smashing into each other at speeds nearing the speed of light. Physicists working with the 17-mile-long Large Hadron Collider hope it will help solve some of the universe's mysteries.

But first, researchers must overcome two very mundane hurdles: how to handle all of the data the LHC generates, and how to get non-scientists to care.

One physicist has a novel way to solve both problems: sound.

"I have some musician friends that I was talking to about physics, which I do a lot, if people will let me, and I was doing impersonations of particles -- as you do -- or maybe not," Lily Asquith says with a laugh. She is a physicist who until recently worked with the LHC at CERN, the European Organization for Nuclear Research.

Here's How It Works

The concept underlying the LHC Sound project is a principle called sonification — using data to make sound. At the most basic level, sonification correlates any physical property, such as a distance, speed or direction, to a sound property such as loudness, pitch or duration.

On her blog, Lily Asquith explains how to make sound out of anything.

The audio clip below is sonified data from the ATLAS detector at the Large Hadron Collider. Here's how the sound was made: 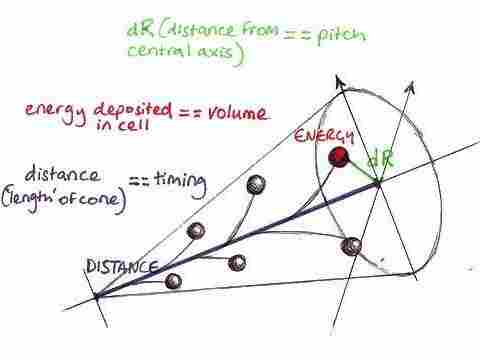 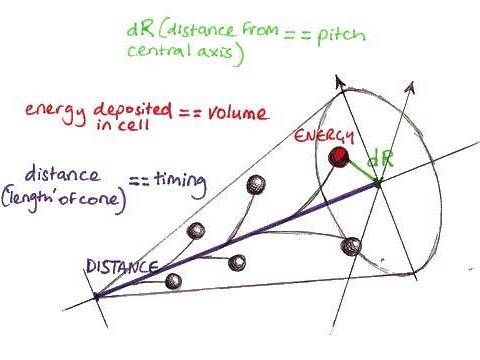 As a beam of particles is fired through the detector, three data points are collected and mapped to sound parameters: (1) The distance the particle travels away from the beam (dR in the diagram above) becomes the sound's pitch, (2) the amount of energy a particle has correlates to volume, and (3) how far the particle travels becomes the timing of the notes.

Asquith, like many physicists, spends a lot of time thinking about particles like the elusive Higgs boson -- the subatomic particle that scientists say endows everything in the universe with mass. Proving the existence of the Higgs boson is one of the main goals of the collider.

"You tend to personify things that you think about a lot," she says. She gives particles personalities, colors and sounds. "I think electrons, perhaps, sound like a glockenspiel to me."

In the process of the search for the Higgs, the collider generates a massive amount of information -- more than 40 million pieces of data every second. And that's just from the ATLAS detector, one of the four main detectors in the deep underground complex that tunnels back and forth across the French-Swiss border.

So Asquith was trying to figure out a new way to understand and sort through all of this data. The LHC currently produces colorful images as an output from the data -- sprays of particles in different directions.

"It's quite easy to step from there, really, to consider that there could be some kind of sound associated with these things," she says.

Making Sound From The Data

She thought about a heart monitor in a hospital; it turns the electrical data from your heart into sound.

"You don't have to watch the monitor because you can hear it without making any effort," she says. "Just a steady beep -- you can quite easily detect if it starts going quicker or if it stops even for a second."

She wondered what would happen if she used music composition software to turn data from the collider into sound. So she fed in a sample of the LHC data -- three columns of numbers.

"So we'll map, for example, the first column of numbers, which may be a distance, to time," Asquith says. "And we may map the second column of numbers to pitch, and the third, perhaps, to volume."

What she got isn't quite music, but sounds that are more out of this world -- bells, beeps and clangs.

Right now, Asquith says, the sounds don't tell scientists very much. But she hopes that in the future, it could help them understand the data in new ways.

This animation shows a collision between particles in the ATLAS detector at the Large Hadron Collider. Note: the video clip has no sound.

She says that in certain situations, it's much easier to use your ears than your eyes, particularly with something that's changing over time. Collider data do that.

"You could certainly have an alarm system which told you when, for example, you have an event which looks ridiculous according to what you've expected," she says. "And that's quite difficult to do using your eyes."

But the project is doing something else -- making what's going on at the collider accessible and interesting to people without a Ph.D. That includes many of Lily's friends who are musicians.

They are really interested in -- even fascinated by -- what's going on at the LHC. But she says they start to look frightened when she brings up the hard science.

"I just think that's unnecessary that it frightens people -- it should be something that everyone should enjoy," she says.

LHC Sound: The Sound Of Science