Accessibility links
Into The Tunnels: Exploring The Underside Of NYC Steve Duncan lives dangerously: The urban explorer has plunged far below the city surface to examine the subways and sewers of New York. Follow him on one of his (illegal) journeys through the city's underground.

In New York City, his favorite underground adventure, he could drown when the tide comes in or succumb to toxic gases in the sewers. He could be hit by a train or step on the third rail. And if he gets caught, he would be so under arrest.

So why does he do it? If you could have followed Alice down that rabbit hole, or Jules Verne to the center of the Earth, or gone to see the mandrake god in Pan’s Labyrinth, wouldn't you do it? It's seductive. It's mysterious. It's what lies beneath.

Duncan, 32, is a graduate of Columbia University working on his doctorate in urban history at the University of California. He looks like a human sparkler, with a shock of white-blond hair.

Call him what you will -- including crazy. But while you sleep, he's plunged far below the city surface -- headlamp on, an urban mole, exploring the nether regions of New York.

Producer Brent Baughman and I followed Duncan -- not down every manhole, but, hey, we stood anxiously beside a few -- on a journey through 25 miles of New York City underground. 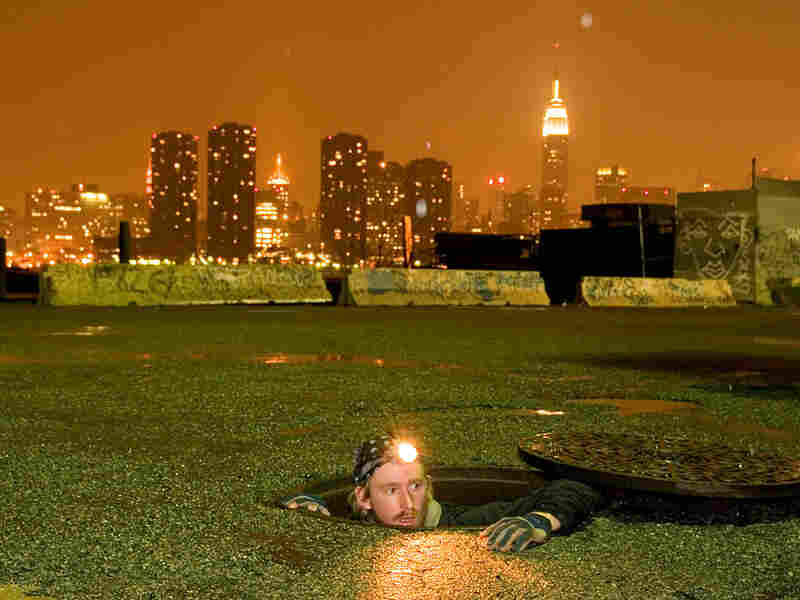 Steve Duncan, an urban explorer who has examined the hidden infrastructure of major cities all over the world, emerges from a manhole in New York City. Courtesy of Steve Duncan hide caption

Exploring What Lies Beneath

Duncan, master of the "Undercity" (you can find his photographs at Undercity.org), had arranged a trek with Nordic explorer Erling Kagge. Kagge, who is in his late 40s, has completed the trifecta: He has summitted Everest, hiked the South Pole, and he was the first man to walk alone to the North Pole. He's killed a charging polar bear with a shot from a handgun.

Looking a bit like Thor, Kagge showed up in a cherry-red sweater with a big white furry heart.

"I'm always asking myself why I can't remain sitting in my chair," he said, changing into some webbed long underwear at midnight on a freezing Bronx street corner. "I'm not always waiting for the answer. I think most people underrate the possibilities to fulfill their own dreams. So I think much more is possible in life than people seem to believe. We're all born explorers."

He called the underground hike a trip "through New York's subconscious."

We waited in the snow as the explorers descended below, along with a videographer and a New York Times reporter. The men climbed over a wall and lowered themselves into a freezing stream flowing into a culvert. They vanished. They would have to walk 30 or 40 blocks, with their waders on, to a climb out of the previously scouted manhole on the residential street in the Bronx where we would be waiting. A colleague of Duncan’s patrolled with us.

One hour passed. Then two. Then three.

"Mole men, this is topside, come in!" spotter Will Hunt called into his radio over and over. Just after 5 a.m., they emerged, filthy and elated. They had been in beautiful, double-barreled brick sewers built in the 1890s. But there had been some water problems; Duncan jettisoned leaking waders.

Then, it was off to cross the Harlem River to the subway, head back south and find a place to sleep. We had sleeping bags and backpacks. We needed warmth. Columbia University, Duncan's alma mater, was the target. 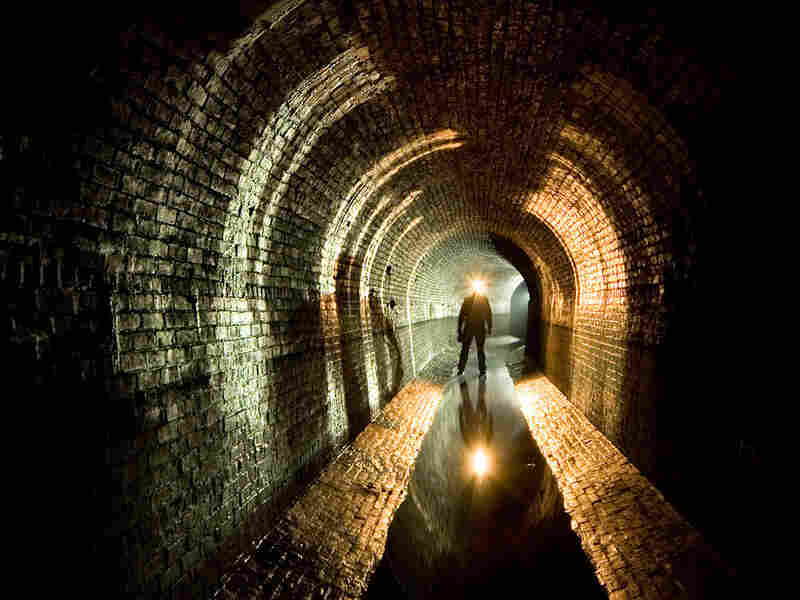 'The Big Thing Here Is Not To Get Killed'

Employees filling vending machines in Buell Hall didn't give us a second glance as we headed downstairs to the basement. Steam tunnels below the university were made famous in the 1968 student sit-in. Duncan jimmied a locked door with a knife, and we wormed through darkness and beside pipes into a coffin-sized passageway next to heating ducts and the boiler. Oh, to be warm and dry -- if dusty.

Each explorer seemed to sleep like a stone. Breakfast was bourbon and cough drops at 4 p.m. -- for strength. Then, we climbed back up and emerged into the philosophy department -- during the faculty Christmas party. Backpacks and hiking boots didn't quite fit the dress code, so we retreated back into the night, reluctantly.

The second night out was beginning, and after a brief stop at the New York Athletic Association on swanky 59th Street -- an underground river runs beneath the building -- we ended up somewhere off Delancey Street, contemplating visiting abandoned subway stations. By now, it was after 1 a.m.

Unfortunately, the subways I saw were nowhere near as abandoned as I'd expected. There were no express trains, but we had to avoid service trains and other, unscheduled locals. Duncan gave this inspiring speech:

"The big thing here is not to get killed. So don't touch the third rail. If a train's coming, get out of the way. That might mean -- in the worst situation I can imagine -- that might mean standing in between two third rails and two pillars with trains coming on either side of you. You will get seen, but you won't get killed."

We walked stealthily, single file like a special-ops team, until he halted.

"I could have sworn I saw a guy over there," he whispered. And then we were running. Was a train coming? Were we being chased? I was at the end; who knew? I heard a loud police whistle. A worker? A security guard? A cop? We ran. At a subway platform, to the astonishment of passengers, the men hauled me up, backpack and all. Why were we doing this? Well, this part may have been a miscalculation, Duncan said. 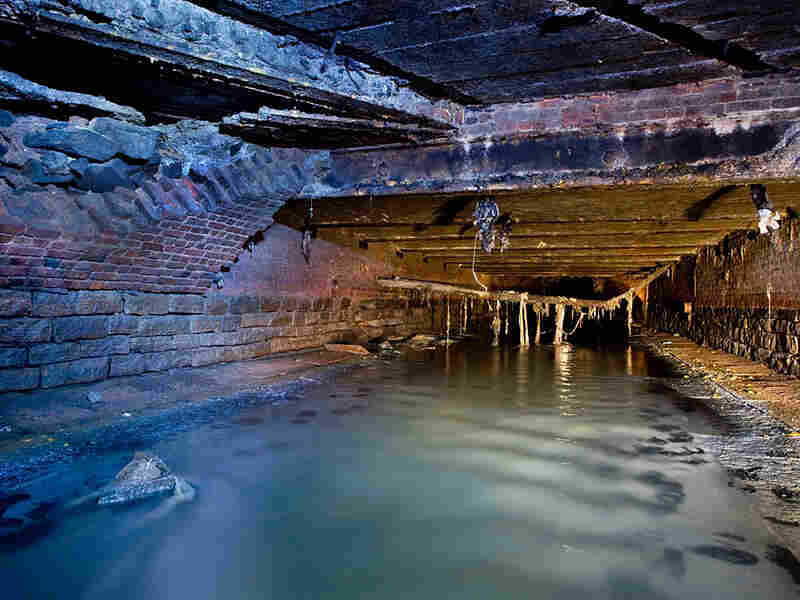 The Canal Street Sewer in Manhattan, New York's first covered sewer, was roofed over circa 1812 -- previously, it was an open ditch (the "Canal" of Canal Street). Courtesy of Steve Duncan hide caption

"It was a little nerve-wracking tonight," he admitted. "But I think there's a lot of really fantastic parts of the city’s infrastructure that are not morally bad to experience. I'm not doing immoral things down here, and I think these things help people see the city for what it is: a fascinating place that's grown over time. But you try to explain that to a cop arresting you and you're not going to get very far."

In 2001, a SWAT team swarmed him on the roof of the Cathedral of St. John the Divine and nabbed him.

That's the dilemma of this kind of urban exploration -- of seeing things most people will never see.

The 'Mole People,' And Another Close Call

Kagge, who is writing a book about happiness, wanted to interview the "Mole People" who live off the Amtrak tunnel below Riverside Drive. One of them, Brooklyn, lives in an "igloo," as she put it -- a sort of dump beneath the tracks, which were lined with mural after mural of intense, weird graffiti.

"What do you think people above ground do wrong in life?" Kagge asked her.

"It's called appreciate what you got," Brooklyn said. "And hold on to it. And don't lose it. I don't know why people are miserable -- they got everything that I don't have. And I'm happier than them."

Soon, she burst into Sister Sledge's "We Are Family."

After that, the explorers went on to crawl below Canal Street in lower Manhattan, in an old sewer they entered through a manhole. It was so narrow, they were soon lying flat. Rats and cockroaches ran past their heads. Raw sewage splashed them. They showed up at my flat at 7 a.m., frozen and happy and very, very filthy. But apart from a little scrubbing up, there was no stopping.

The last leg of the journey was through Queens. They had now been in nearly every borough of New York, and Duncan and Kagge wanted to hike through a storm sewer that emptied into Jamaica Bay. The manhole was in a forest in Queens. They popped the lid, climbed down rusted ladder runs -- and walked into the Atlantic.

"It was pretty scary ... the tide came in about an hour earlier than I expected and I got wet to my waist. But it was awesome," Duncan said.

Kagge, the polar explorer, termed it "a proper expedition" -- from the North Bronx all the way out to the Atlantic.