Accessibility links
Juilliard, Carnegie Join Together To Teach More Than Music Young musicians need more than talent to get along in today's world. Carnegie Hall and the Juilliard School hope their new program will teach students how to share their gift with the world around them. 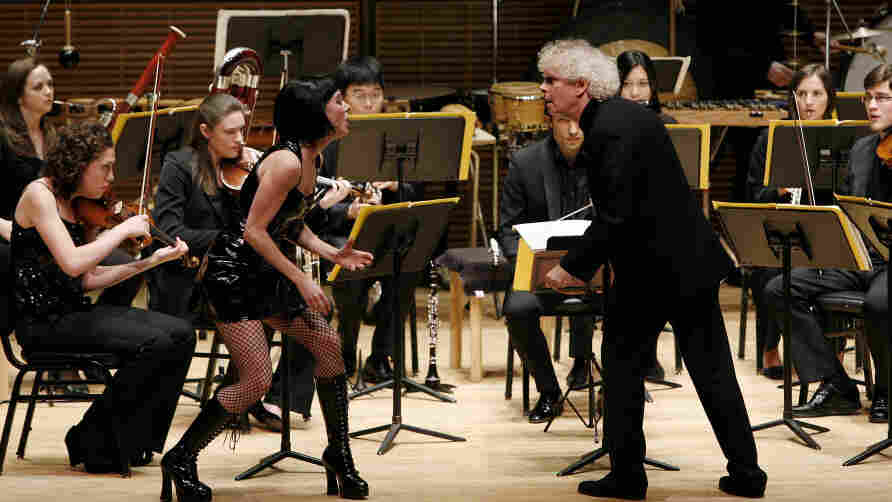 Academy students work three days a week, 30 weeks a year, on the very highest musical level and performing on one of Carnegie’s stages with the likes of conductor Sir Simon Rattle. Jennifer Taylor hide caption 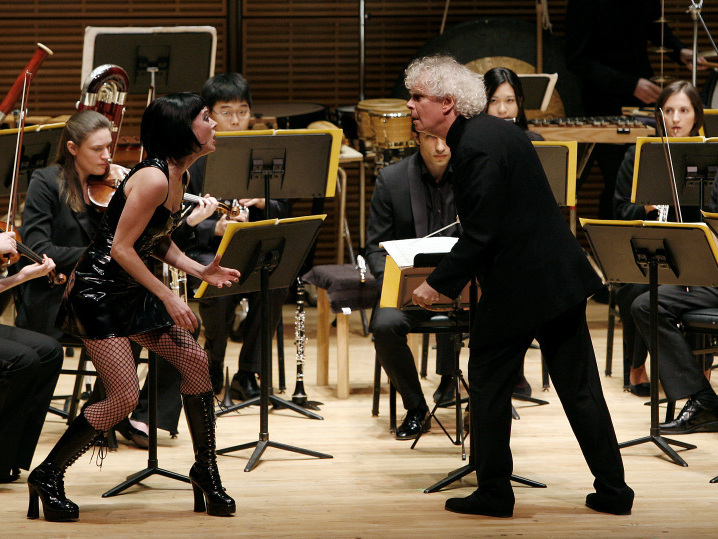 Academy students work three days a week, 30 weeks a year, on the very highest musical level and performing on one of Carnegie’s stages with the likes of conductor Sir Simon Rattle.

How does a young classical musician, fresh out of school, navigate the tricky and somewhat limited career options available?  At the Academy, Carnegie Hall and the Juilliard School are hoping to build more than musical talent in their students.

The idea for the Academy began over a meal between Carnegie Hall Executive Director Clive Gillinson and Juilliard School President Joseph Polisi.  The two agreed talent alone isn't enough to face the challenges young classical musicians face today -- they must be teachers and entrepreneurs, too.

The challenge for educators, Gillinson says, is "how do we deliver, to the best young musicians, a skill set that will enable [them] to define their own lives as musicians?"

Gillinson and Polisi hopes the Academy will produce great musicians who are also great communicators.  The program teaches students more than simply applying for job after job in hopes of achieving an income. "We're saying, you've actually got the capacity to define your own life," Gillinson says.

Every two years they select 20 fellows.  Each receives a stipend of $25,000 a year, health insurance and access to the best teachers and coaches at Juilliard. They work three days a week, 30 weeks a year, on the very highest musical level -- performing on one of Carnegie's stages with musicians like Sir Simon Rattle. They also gather more down-to-earth experiences, like teaching in New York City public schools.

"They fit into the mold of what one would call in the United States today, 'teaching artists,'" Juilliard President Joseph Polisi says. "In other words, they teach their art, and they do it through their performance and through their instrument."

A First Day Of School

One of the fellows beginning the program is Nathan Schram, a genial 23-year-old viola player. The self-proclaimed Navy brat grew up all over the country and got a music degree at Indiana University.  Last year, Schram got an e-mail inviting him to audition for the Academy.

Day One is in mid-October at P.S. 75, an elementary school in Brooklyn's Bushwick neighborhood. It's dominated by  immigrant and working-class communities.

"I think you would describe this school as under-resourced," says Zelman Bokser, who teaches violin there. "It's not a very high socio-economic neighborhood."

But even with limited resources, Bokser has created a vibrant music program. In a school of 650 students, he's teaching 83 of them to play the violin.

"What's amazing is that these kids are competitive with kids in any other public school in the city, in this program," he says. "These kids have played in Carnegie Hall and at Lincoln Center, at the Apollo Theatre and lots of other places.  And there are very few schools that have had those opportunities, so we're really lucky."

With the addition of Schram, that luck now includes a professional musician to help teach the children.

"I'm trying to explain to them that music can also have character," Schram says. "Music can describe people. It can be a character in itself."

Working with the kids has been inspiring for him, too. "The kids are wonderful.  I'm amazed at how well-behaved they are, how excited they are about music and, just, they're very receptive. And if someone doesn't get something the first time, they'll get it the second. I mean, it's just, I didn't expect to have such quick results."