Accessibility links
Mexico Seeks Lessons From Colombia's War On FARC Mexican forces are outgunned in their fight against drug-trafficking organizations, facing an adversary that in some ways is like Colombia's insurgency. To help battle the cartels, a handful of Mexican police officers and soldiers get commando training from Colombia's elite Jungla unit. 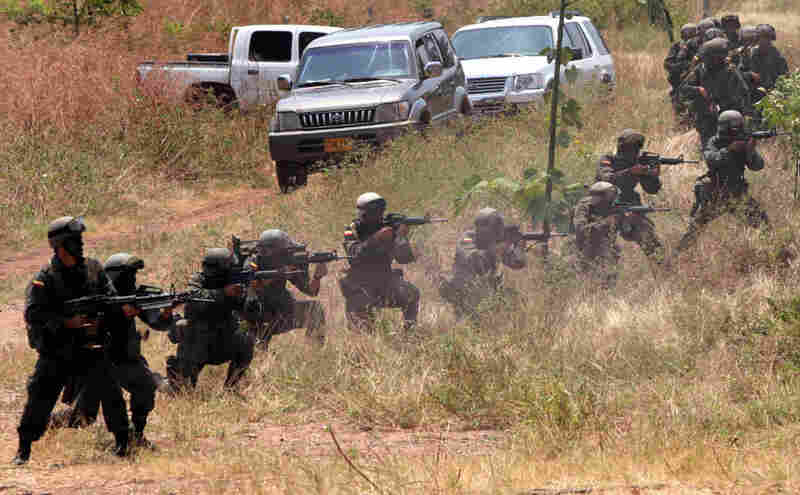 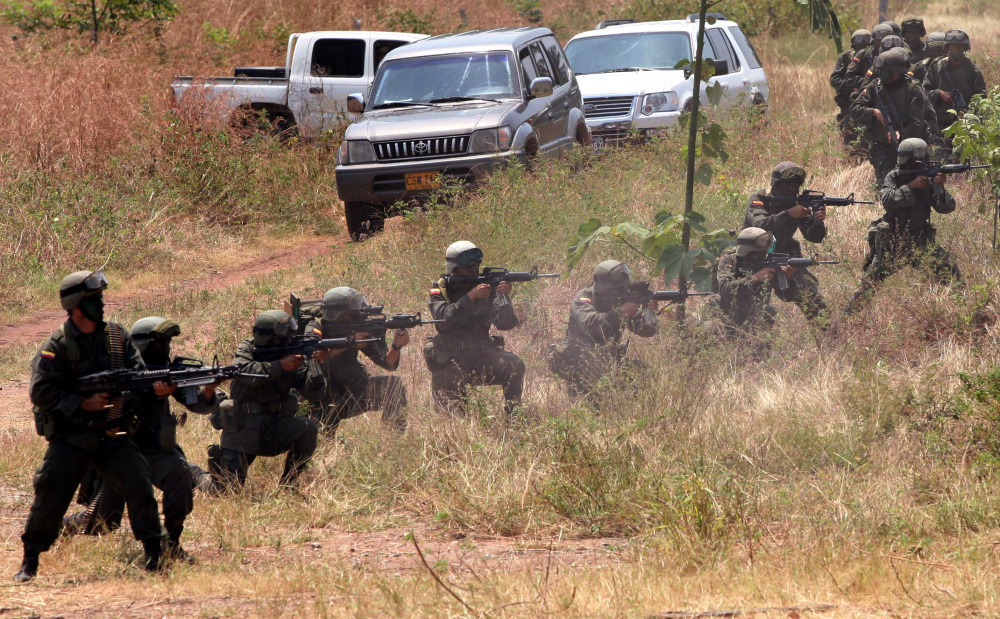 Police officers from different countries fire their weapons at targets during training with Colombia's elite Jungla unit in 2007.

Mexican government forces are outgunned in their fight against drug-trafficking organizations, facing an adversary that in some ways is like an insurgency, prompting the country to look for help not just from the United States, but from a country to the south, Colombia.

Colombian forces have been battling a big guerrilla army with increasing success. It turns out that Colombia's expertise in counterinsurgency may help Mexican forces in their fight against the cartels.

Carlos Nieves, a gumshoe Mexican police investigator, stands in the dead of night, some 8,500 feet high in the mountains of central Colombia. His superior tells him -- and more than 60 other cops and soldiers from across Latin America -– about the hardships ahead: hours and hours of hiking through thick brush, with temperatures near freezing.

He is outfitted in olive-green camouflage and carries a 50-pound knapsack and an automatic rifle. Nieves says he hasn't slept in five days. That's been hard, he says, but it's been worth it.

That's because after four months, Nieves and a handful of other Mexican police officers and soldiers are finishing the toughest of commando training courses. And not just from anyone: It's from Colombia's elite Jungla, or Jungle, unit.

We don't want to sound like we know it all, because we are constantly learning, because these people are constantly adapting to new circumstances. But what we can do is, work together in order to help in this very difficult situation that Mexico is going through.

Part of the national police, it's sort of like a SWAT team, but one that targets the Revolutionary Armed Forces of Colombia. FARC, Colombia's biggest rebel group, some 9,000 fighters strong, holds territory, carries out ambushes and wields weapons of war -- everything from AK-47s to antitank busters to 50-caliber machine guns.

Nieves says that's the kind of weaponry he sees in raids in Mexico.

Taking Fight To The Enemy

There are many ways that Mexico is different from Colombia –- most importantly there's no rebel army trying to overthrow the state. Yet, Mexico's violence is spiraling out of control, as it was in Colombia 20 years ago when Medellin cartel leader Pablo Escobar was at the height of his powers. There are other similarities, too: One is that the narcos in Mexico are increasingly starting to control territory and ambush Mexican forces.

"We don't want to sound like we know it all, because we are constantly learning, because these people are constantly adapting to new circumstances," he said. "But what we can do is work together in order to help in this very difficult situation that Mexico is going through."

Outside Cajica, what the Mexicans are learning is to take the fight to the enemy.

At 5 a.m., gunfire signals a simulated assault on what's supposed to be a FARC camp. The trainees swoop into the FARC stronghold, but not everything is going as planned: The FARC commander, dubbed the Little Fat Man, is nowhere to be found.

A Jungla commando overseeing the whole thing mocks the trainees, making sure they know they are failing at their main mission.

Yet, in four months, the Mexicans have learned about explosives and assault rifles. They have done jungle training, learned how to raid heavily fortified houses and patrolled rivers.

It will all come in handy, says Carlos Mejia, another police officer from Mexico. The training has been hard, but he says he feels better prepared for the violence he expects to face back home.

At daylight, though they have been up for five days, the trainees are marching again, complete with a rousing song about the competence of Jungla commandos. They then shed their heavy packs and begin to crawl up a steep hill in the mud.

With that, it's all over.

It ends with the Jungla oath and graduation from commando training.