Accessibility links
Our Brains Are Shrinking. Are We Getting Dumber? When it comes to brain size, does bigger always mean better? As humans continue to evolve, scientists say our brains are actually getting smaller. 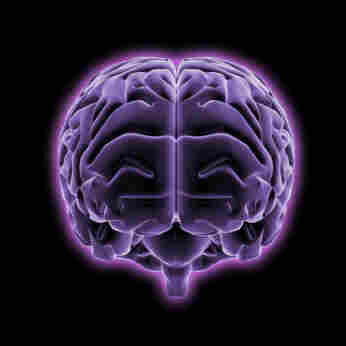 Today's human brain is about 10 percent smaller than the Cro-Magnon brain from more than 20,000 years ago. iStockphoto.com hide caption

When it comes to brain size, bigger doesn't always mean better. As humans continue to evolve, scientists say our brains are actually getting smaller.

The downsizing of human brains is an evolutionary fact that took science writer Kathleen McAuliffe by surprise.

"I said, 'What?  I thought it was getting bigger!'" she tells NPR's Jacki Lyden. That was the story up to 20,000 years ago, she learned. Then, the brains of our ancestors reversed course and started getting smaller -- and they've been shrinking ever since.

Cro-Magnon man, who lived in Europe 20,000 to 30,000 years ago, had the biggest brains of any human species.  In comparison, today's human brain is about 10 percent smaller. It's a chunk of brain matter "roughly equivalent to a tennis ball in size," McAuliffe says.

The experts aren't sure about the implications of this evolutionary trend.  Some think it might be a dumbing-down process. One cognitive scientist, David Geary, argues that as human society grows increasingly complex, individuals don't need to be as intelligent in order to survive and reproduce.

But not all researchers are so pessimistic. Brian Hare, an anthropologist at the Duke University Institute for Brain Sciences, thinks the decrease in brain size is actually an evolutionary advantage.

"A smaller brain is the signature of selection against aggression," Hare tells Lyden.  "Another way to say that is an increase in tolerance."

Hare says when a population selects against aggression, they can be considered to be domesticated.  And for a variety of domesticated animals like apes, dogs or turkeys, you can see certain physical characteristics emerge. Among these traits are a lighter and more slender skeleton, a flattened forehead -- and decreased brain size.

Hare's studies focus on chimpanzees and bonobos.  In evolutionary terms, they are much like humans, but are physically quite different from one another. Bonobos have smaller brains than chimpanzees -- and are also much less aggressive.

While both have the cognitive ability to solve a given puzzle, Hare says, chimpanzees are much less likely to accomplish it if it involves teamwork.  Not so with bonobos.

Hare does admit that the shrinking human brain could signal an evolutionary dumbing-down, but more important is what the phenomenon tells us about ourselves. Comparing our evolution to that of other animals enriches our understanding of the human condition.

"The nice thing about studying animals and human nature," Hare says, "is that it helps us design or think of some strategies that deal with our darker sides."