Accessibility links
No Hollywood Ending To Schwarzenegger's Term The man some call "The Governator" came into office with sky-high approval ratings, but he leaves with a near-record low approval of just 23 percent. Still, it's hard to know if Arnold Schwarzenegger will be judged on his failures or his successes in the long term.

As Arnold Schwarzenegger exits California's governor's office on Monday, he leaves behind a $28 billion budget shortfall.

"The Governator" came into office with sky-high approval ratings, but he ends his term with a near-record low approval of just 23 percent -- and a mixed political legacy.

Many politicians say they thought long and hard about their decision to run for office, but no one said it quite like bodybuilder-turned-movie star Schwarzenegger did when he announced his candidacy for California governor on The Tonight Show.

"It was the most difficult decision that I've made in my entire life -- except the one in 1978, when I decided to get a bikini wax," he said.

That should have been signal enough that Schwarzenegger wasn't going to reinvent himself to become a politician.

He took advantage of a unique opportunity -- an unprecedented election to recall Democratic Gov. Gray Davis. Schwarzenegger won easily and brought his macho swagger and Hollywood flash to the state Capitol.

"I'd never been around that kind of star power before," says Democrat and former Senate leader Don Perata. "I was really stunned by the way people reacted to him and the enormity of his popularity."

Politically, this new governor was hard to define. He was a Republican and fiscal conservative who also supported gay rights and gun control. People didn't just expect Schwarzenegger to govern California; they expected him to save it. It was an expectation the new governor did nothing to discourage in his inauguration speech.

But Schwarzenegger himself created a roadblock that very day, say his critics. He rolled back the unpopular car tax, leaving a $4 billion hole in the budget.

View a retrospective of Arnold Schwarzenegger's administration as the 38th governor of California. 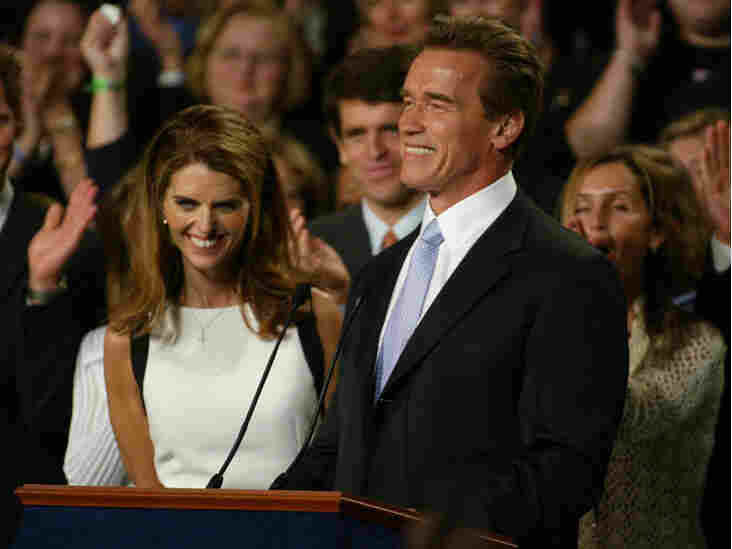 Republican Arnold Schwarzenegger is joined by wife Maria Shriver as he celebrates his victory in the California gubernatorial recall election on Oct. 7, 2003, in Los Angeles. Chris Carlson/AP hide caption

Two years later, Schwarzenegger made a devastating decision. He called a special election on a raft of ballot measures that targeted many things that Democrats and unions hold dear.

"I just never thought that a fight where you're taking on every special interest makes a lot of sense," says Schwarzenegger's fellow Republican and former Senate Minority Leader Jim Brulte. "In Hollywood, the one guy with the pistol beats the 15 guys with machine guns, but in the real world, I don't know that that's the way it works."

The superstar governor who had promised to fix California's financial mess presented voters with a hodgepodge of measures. Only one of them had anything to do with the budget. The others dealt with political reform and teacher tenure. Schwarzenegger also wanted to make it harder for unions to spend dues money on politics -- which made unions spend money like water to go after him.

In a TV spot, uniformed police officers expressed their disappointment. "You're not the governor we though you'd be," one said.

All of Schwarzenegger's initiatives were defeated, leading him to do something rare for politicians: He apologized, sort of, during his State of the State speech.

"I have absorbed my defeat and I have learned my lesson," he said.

But he lost his aura of invincibility forever. Perata says Schwarzenegger became a man without a country. His fellow Republicans reviled him for working with the majority Democrats. And those Democrats in the legislature felt like they could now confront him.

As California's budget deficit has grown and the economy has tanked, there's a nagging feeling that it didn't have to be this way, says journalist Lou Cannon, who has written biographies of California's other celebrity governor, Ronald Reagan.

Cannon says Schwarzenegger could have "come out for more revenue sources early on, when he was popular. And he chose, for whatever reason, not to do that. And I think that he didn't take advantage of his political honeymoon."

But Cannon says that history may judge Schwarzenegger much differently than the voters do now. "If you're making a judgment now, I have a sense of disappointment that Schwarzenegger didn't fulfill his promise. But I don't think the final judgment is in."

For historians, it may not be all about the budget. Schwarzenegger did have some successes, and their effects won't be known for years. Chief among these are his environmental measures, like signing a bill to regulate greenhouse gas emissions and requiring a third of California's energy to come from renewable sources by the year 2020.

Bill Magavern, head of the Sierra Club of California, says Schwarzenegger has been a great ambassador for the issue of climate change.

"Schwarzenegger reaches people who might otherwise not be listening when global warming is discussed," he says.

But Magavern complains that Schwarzenegger has been too easy on major polluters, that he's been inconsistent on offshore drilling and that he tried to shut down the state parks to save money. 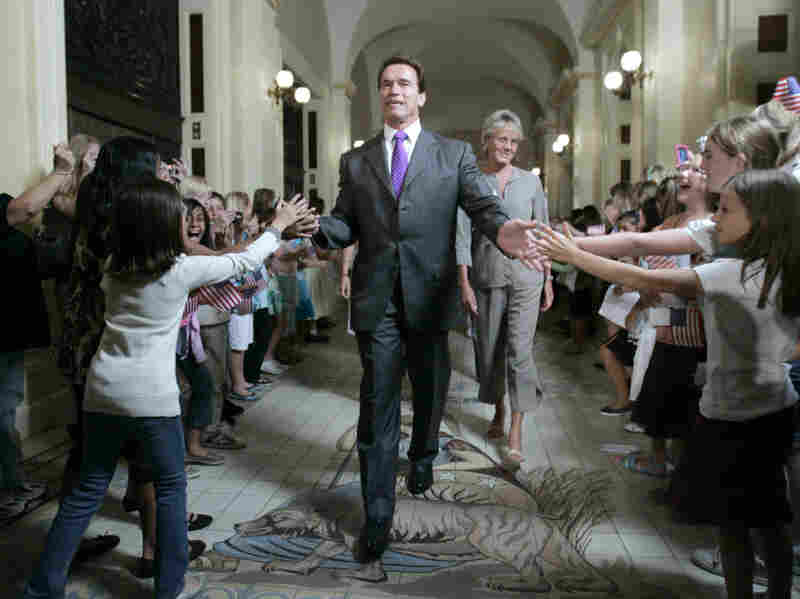 Schwarzenegger is greeted by children as he walks to a ceremony to honor Olympic athletes from California at the state Capitol in 2008. Despite his ability to draw a crowd, Schwarzenegger leaves office on a low note, with an approval rating of just 23 percent. Rich Pedroncelli/AP hide caption 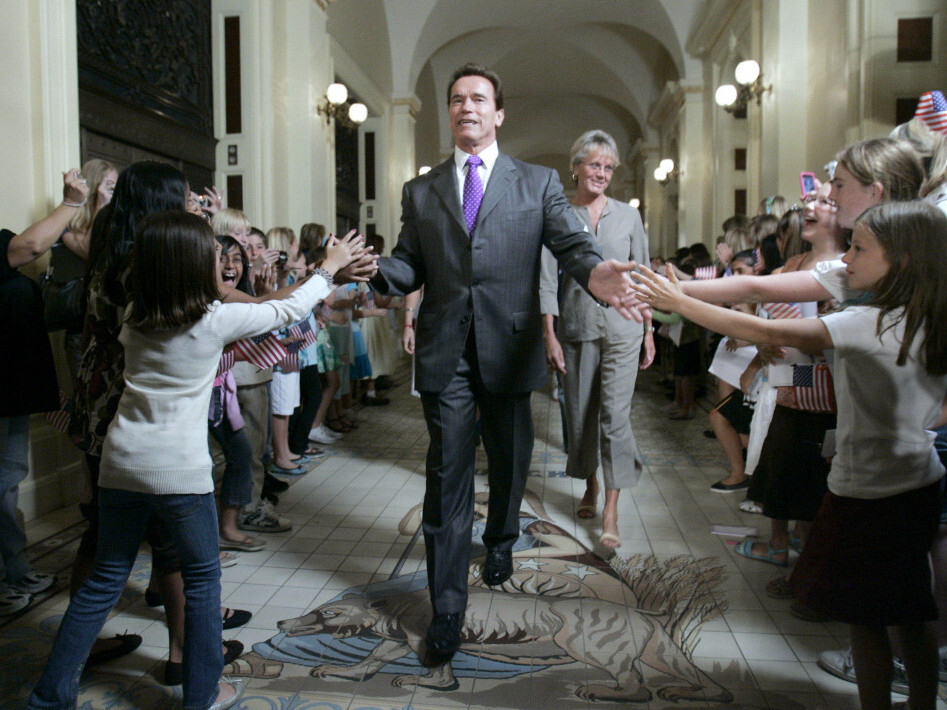 Schwarzenegger is greeted by children as he walks to a ceremony to honor Olympic athletes from California at the state Capitol in 2008. Despite his ability to draw a crowd, Schwarzenegger leaves office on a low note, with an approval rating of just 23 percent.

There's more agreement on another one of Schwarzenegger's initiatives: a nearly $40 billion program to rebuild the state's decaying roads, bridges and levees. Not very sexy. But Brulte, the former Senate minority leader, predicts it will make both voters and politicians happy for years to come.

"For the next decade or two, politicians of both parties will be going to ribbon-cuttings and groundbreakings, taking political credit for initiatives that began under Arnold Schwarzenegger," he says.

Finally, there are two Schwarzenegger initiatives that -- love 'em or hate 'em -- are going to shake up California elections. First, legislative districts will now be drawn by an independent commission, instead of the legislature. And from now on, all candidates in primary elections will run on a single ballot. The top two will make it to the runoff, even if they're both from the same party.

"Those two political reforms, in and of themselves, are truly historic," Brulte says.

But so is California's financial crisis, and it's hard to know now whether Schwarzenegger will be judged on his historic successes -- or failures.