Accessibility links
Camaron De La Isla: The Voice Of Flamenco Camaron de la Isla re-energized a centuries-old flamenco tradition, leading the music into the 20th century and beyond. As he began his career, flamenco was still a connoisseur's music, hardly part of the popular Spanish mainstream, but Camaron would change that forever. 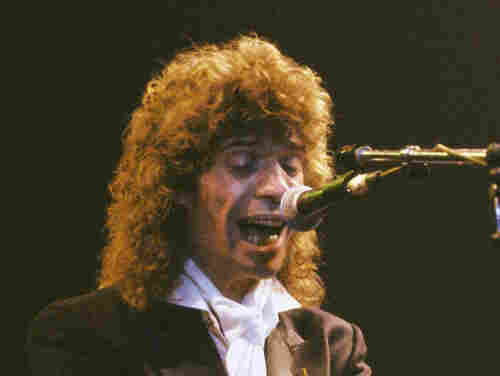 There are just a handful of musicians whose influence changed the sound of their genre. Flamenco vocalist Camaron de la Isla is on that short list. He re-energized a centuries-old tradition, leading flamenco into the 20th century and beyond.

Flamenco singing is one of life's deeper musical mysteries. We hear traces of Africa by way of the Moors; you can also hear bits of Punjabi singing; there are Persian, Arabic and even Jewish cultures in the DNA of flamenco. Some say it's almost impossible to understand the subtle nuances of the vocal tradition because flamenco singing is so complex. Even Paco de Lucia, Spain's most celebrated flamenco guitarist, says it's a hard nut to crack. "It is the purest expression of flamenco, and because of that ... it is difficult to understand," he says. "Outside of Spain, flamenco singing is the least valued because it is so complex and difficult to grasp."

Camaron de la Isla not only understood it, but he also lived it. His family was gitano — Spanish for gypsy or Roma. He was born Jose Monge Cruz, and his nickname reflected his small size and unusual light skin: Camaron de la Isla — "small white shrimp from the island."

As he began his career, flamenco was still a connoisseur's music, hardly part of the popular Spanish mainstream. So as he started to revolutionize the music in the early 1970s, you would think it was a somewhat quiet rebellion, noticed only by die-hard aficionados and musicians. Think again.

The music burst out of the tiny bars and meeting rooms where flamenco had been traditionally performed for centuries. Tens of thousands flocked to auditoriums to hear him sing. Rock stars like Mick Jagger paid notice. And yet just how he did it is as hard to pin down as one of the non-Western scales he sang so well.

For 10 years, starting in the late 1960s, Camaron and Paco de Lucia made a series of albums that upended tradition and made them both flamenco superstars.

Brook Zern, a U.S.-based writer and educator who was recently knighted by the King of Spain for his life's work of educating the world about flamenco, explained how they did that.

"The great master of micro-intervals was Camaron. He was known for afinacion, which means the ability to be perfectly on pitch but not necesarily on the notes of a Western scale. Flamenco music uses microtonal intervals all the time, and nobody cut them closer and did them more precisely technically than this young artist," Zern explains.

Camaron's successes were matched only by his excesses. Like so many other musicians, he fell victim to drinking and drug abuse. And in 1992, at the age of 42, he died. The official cause of death was lung cancer as a result of years of heavy smoking. Many of his fans blamed his lifestyle. What was not at issue was Camaron's voice — how this once-slight young man became such a presence that the history of flamenco is forever divided between Before Camaron and After Camaron.