Accessibility links
The '90s May Hold Lessons For The New GOP Majority Some observers see a striking resemblance between the incoming Republican majority in the House and the one that was elected in 1994, when a big GOP surge ended 40 years of Democratic rule in that chamber. But have the incoming House members learned from their predecessors? 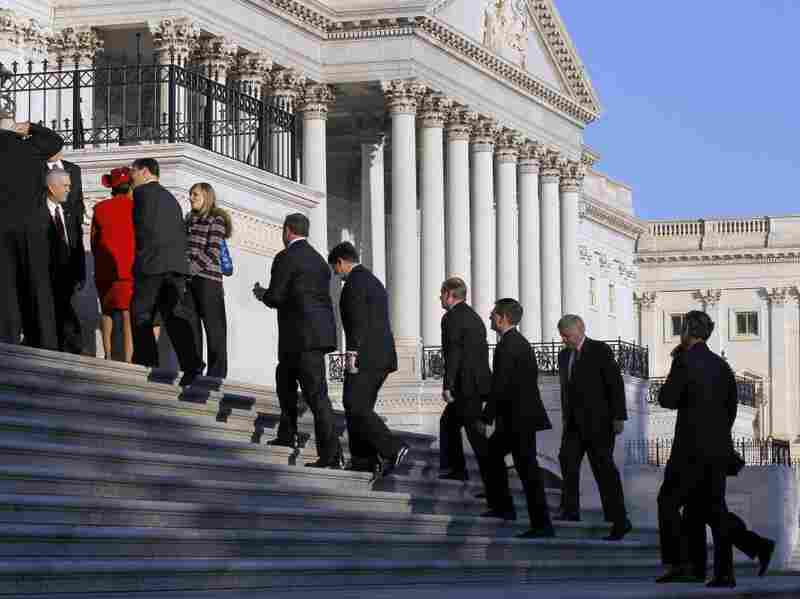 Members of the House's incoming freshmen class walk up the steps of the Capitol to pose for a group photo on Nov. 19. Alex Brandon/AP hide caption 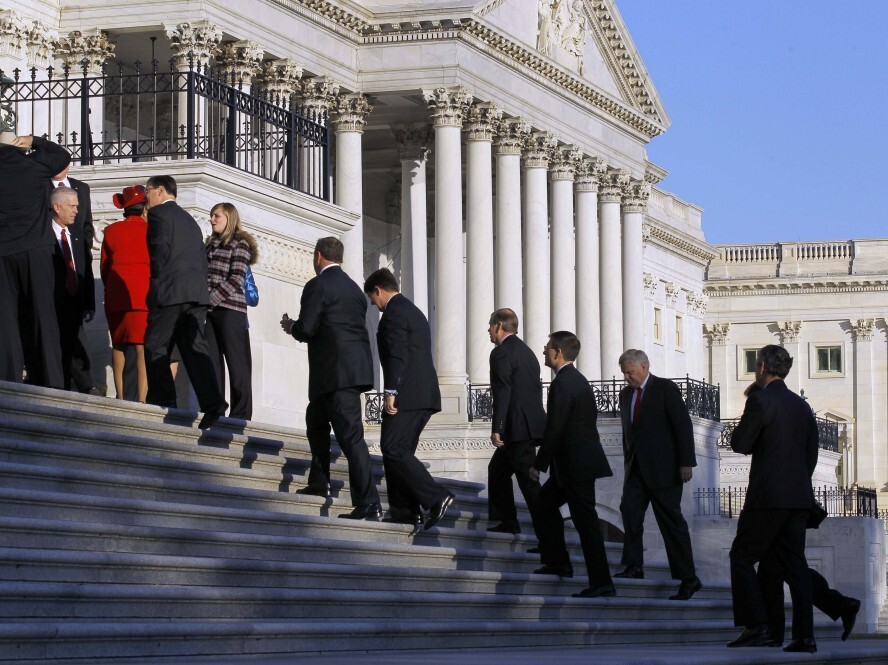 Members of the House's incoming freshmen class walk up the steps of the Capitol to pose for a group photo on Nov. 19.

When the 112th Congress convenes this week, the Republicans will be in control of the House for the first time since 2006. Democrats will continue to have the majority in the Senate, although a much smaller one than they are used to.

Some observers see a striking resemblance to the House that was elected in 1994, when a big Republican surge ended 40 years of Democratic rule in that chamber. This week, a new Republican majority rides in on an even bigger electoral wave, and they may have learned something from their predecessors.

In January 1995, it was a new world on Capitol Hill. For the first time in four decades, Republicans were running the show, chairing the committees, making the rules, setting the agenda.

And Speaker Newt Gingrich presided over it all, surprising many with an uncharacteristic tone of bipartisanship.

"If each of us will reach out prayerfully and try to genuinely understand the other, if we'll recognize that in this building we symbolize America writ small -- that we have an obligation to talk with each other -- then I think a year from now we can look on the 104th Congress as a truly amazing institution without regard to party," he said.

Sixteen years later, a new crop of enthusiastic, idealistic Republicans is poised to take the reins. And the similarities between then and now are striking, says Princeton University political scientist Julian Zelizer.

"In 1994, you had a class of conservative Republicans who saw themselves as part of the conservative movement, who felt closer to activists and political organizations on the right than to Washington, and they came into Washington to change the way things were done," Zelizer says.

An Air Of Dysfunction

But if the 104th Congress is remembered as truly amazing, it isn't necessarily in the way Gingrich had hoped. A budget showdown with President Clinton backfired after Republican leaders made good on a threat to shut down the government. And Democrats say Gingrich's past as a partisan bomb-thrower led to levels of acrimony that permeated Congress then -- and persist even today.

"This really started with Newt Gingrich, because he saw the path to power in '94 ... to be the path of personal destruction of members -- going after them on all kinds of ethical and personal bases," says former Democratic Rep. Martin Frost, "which wasn't necessarily the case prior to that time."

Mickey Edwards, a former Republican congressman from Oklahoma, agrees.  Now vice president of the Aspen Institute, Edwards says the polarization of Congress that began in 1995 contributes to an air of dysfunction that remains today.

"Not only is there this excessive hyperbolic focus on party, but if I disagree with you, I can't talk to you, I can't be civil to you," Edwards says. "The idea of actually having a good relationship with somebody whose views are somewhat different from your own has gone out the window."

But it's possible the lessons of that tempestuous time will be an asset for the new majority in the House.

Of course, not all of the drama in the new Congress will be on the House side. Democrats, who remain in control of the Senate, are increasingly impatient with the ability of the Republican minority there to tie up legislation by insisting on 60 votes to even consider bills or allow presidential nominations to come to a vote.

Democratic Sen. Sherrod Brown of Ohio is one of many who hope to change the rules in the new Senate.

"I think there's a strong sense in the country that the Senate doesn't work the way that it should," he says. "People don't understand that, out of a hundred senators, why would you need 60 to ... even approve a district judge that is noncontroversial? The Senate is too shrouded in mystery to the public and too hidebound in its traditions in doing the public's business."

But Brown and his colleagues know they will have an uphill path to climb to change those traditions. One of the toughest Senate tasks of all is changing the Senate rules.