Accessibility links
What's New In High School? Stress Reduction 101 With college application deadlines looming, high schools are looking for ways to reduce student stress. Some schools have done away with Advanced Placement classes, while others are focusing on teaching kids how to handle the stress with yoga classes, breathing exercises and therapy dogs. 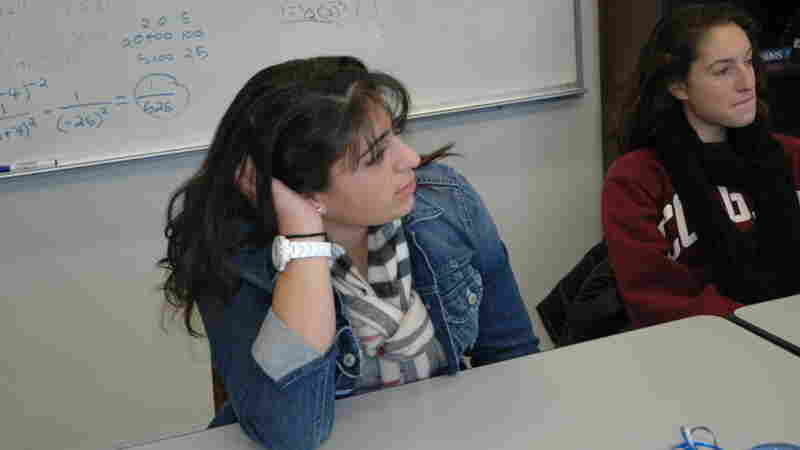 Students Gabby Venuto (left) and Julia Cohen let off some steam during some of the expanded downtime meant to ease the stress on students at the Beaver Country Day School in Chestnut Hill, Mass. The school also eliminated AP classes a few years ago -- a bold move that administrators say hasn't hurt students' college prospects. Tovia Smith/NPR hide caption 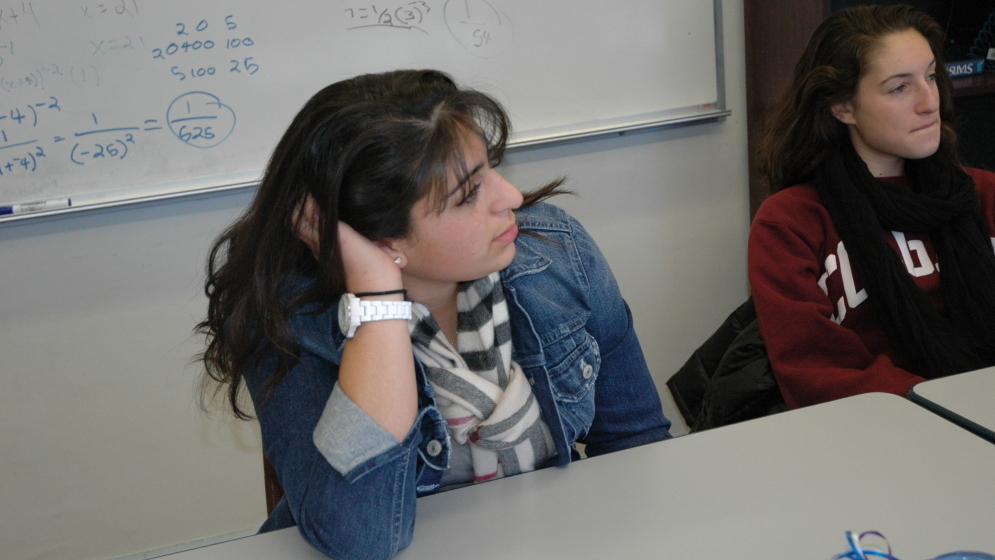 Students Gabby Venuto (left) and Julia Cohen let off some steam during some of the expanded downtime meant to ease the stress on students at the Beaver Country Day School in Chestnut Hill, Mass. The school also eliminated AP classes a few years ago -- a bold move that administrators say hasn't hurt students' college prospects.

With college application deadlines looming, and some early decision letters already in the mail, high school seniors are facing a lot of anxiety.

There's enormous pressure on kids these days. But it turns out that getting schools, parents -- and even kids -- to ratchet it down is easier said than done.

Beaver Country Day School in Chestnut Hill, Mass., outside Boston, is one of a small but growing number of prep schools determined to buck the trend for kids on the college track.

One of the biggest changes the school has made is on display in its calculus class, which used to be an Advanced Placement course.

Senior Sophie Deitz is dancing in front of a dry-erase board, improving math-themed lyrics to Christmas carols. Instead of poring over those fat old textbooks, and working on piles of AP practice tests, she and her classmates are learning complicated concepts like integration by parts by making videos about them.

"I want the calculus to be like a scary monster and then, we being like superheroes!" she exclaims.

It's exactly the kind of high-energy, low-stress kind of learning that Beaver administrators were hoping for when they decided a few years ago to eliminate their AP classes.

"I think that pressure to make sure that you had that trophy on your transcript was something that we felt wasn't necessarily that healthy for kids," says Peter Gow, director of college counseling and special programs at Beaver. "It didn't seem appropriate to be playing into that."

Gow insists the bold move has not hurt Beaver's students' chances of getting into the most competitive colleges. But especially in affluent, highly educated communities, many wouldn't dare risk it.

"Now, if you step back and say, 'Let's take a breath,' the risk is that the pack runs past you," says Lee Coffin, dean of admissions at Tufts University. The hypercompetitive, ever-escalating frenzy around college admissions "is an arms race," he says, and everyone is afraid to unilaterally disarm.

Coffin says colleges have to take the lead. So, for example, despite pressure to top the national rankings, Tufts is now refusing to play the "data game."

Unlike other colleges, Coffin says he won't aggressively recruit huge applicant pools just to "juice the numbers" in order to appear to be more selective. And while other universities love to boast about their rankings, Coffin won't even talk about it.

Vicki Abeles, a mother from California who produced The Race to Nowhere, a documentary about kids collapsing under the pressure to achieve, agrees.

"No one wants to be the first one off the treadmill and looking at things differently," she says.

The film is becoming something of a rallying point for frustrated parents, who are now pushing for change from the bottom up.

"Just last week we had a parent get up and say, 'You know, at some point it comes down to civil disobedience. If a bunch of us just say, 'We're not having our young kids, who are in elementary school, do the homework,' or, 'We're going to keep them home on the test day,' " Abeles says. "I think that you're seeing parents and educators feeling much more empowered."

But for every such "conscientious objector" there are many other parents pushing back.

In Rockford, Ill., for example, when the school board proposed cutting AP classes there, Maggie Kasicki complained that it would be academic suicide for her kids.

"That very much scares us," she says. "If they take this stuff away, we are definitely thinking about private school. We have to make sure our kids can get into college!"

For the most part, school administrators are just as wary about doing something as drastic as dropping AP courses.

"The reality on the ground is you have to have AP courses on your transcript and you have to have A's and B's in them in order to get into these great schools," says Bob Weintraub, headmaster of the Brookline High School, a public school in Brookline, Mass. "That's just reality. So, you know, it might sound harsh, but that's life. Sometimes there's stress. And so, maybe this is good preparation for that."

Teaching Students To Cope With Stress

Weintraub says he started looking at the issue of stress when a student wrote him a letter complaining she was working harder than her father who was a trial attorney.

He says he has made a few more modest moves to lighten the load for students, like instituting a few homework-free weekends, or better coordinating exams and big assignments so students don't have too much piled up on the same day.

But instead of trying to eliminate stress, many schools have put their focus on teaching kids to better handle it. Schools are experimenting with everything from yoga classes and breathing exercises to therapy dogs. They are also giving students more time to vent.

It may help, but students say even the most supportive schools can only do so much, since the pressure to get into a top college really comes from everywhere.

Beaver Country Day School senior Julia Cohen says she even feels pressure from strangers, who constantly pepper her with questions about which college she will attend.

"That just always provides more stress," she says. "Like my dentist asked me -- and like it just drowns you. You just get so eaten up by it!"

"The whole system is like an evil machine that's consuming kids," he says. "Our school has defanged it, but only as much as any one school can."