Accessibility links
Yuri Shevchuk: Russia's Musical Advocate For Democracy Within Russia's borders, DDT's Yuri Shevchuk is bigger than Bono. Shevchuk has often engaged in Russian politics by attending rallies or peace demonstrations. But many in Russia see his frustration now reaching the boiling point: He's fed up that so few people are speaking out. 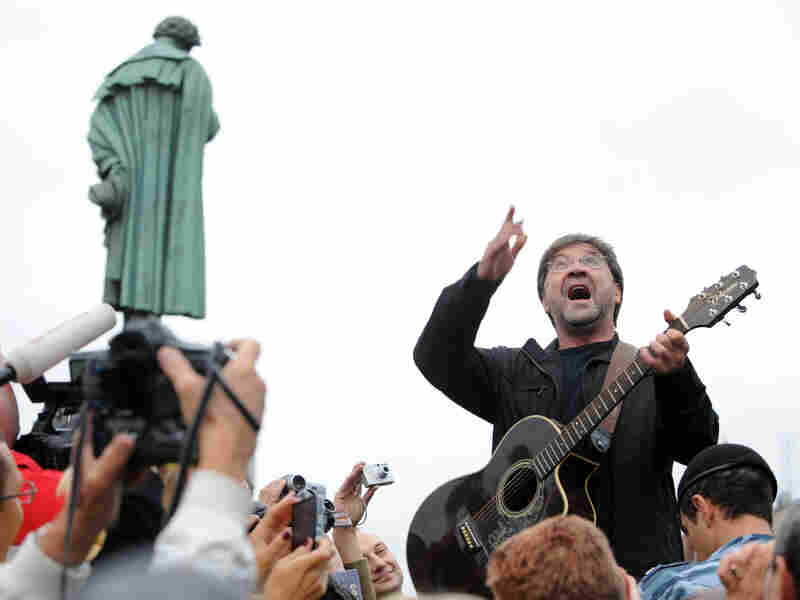 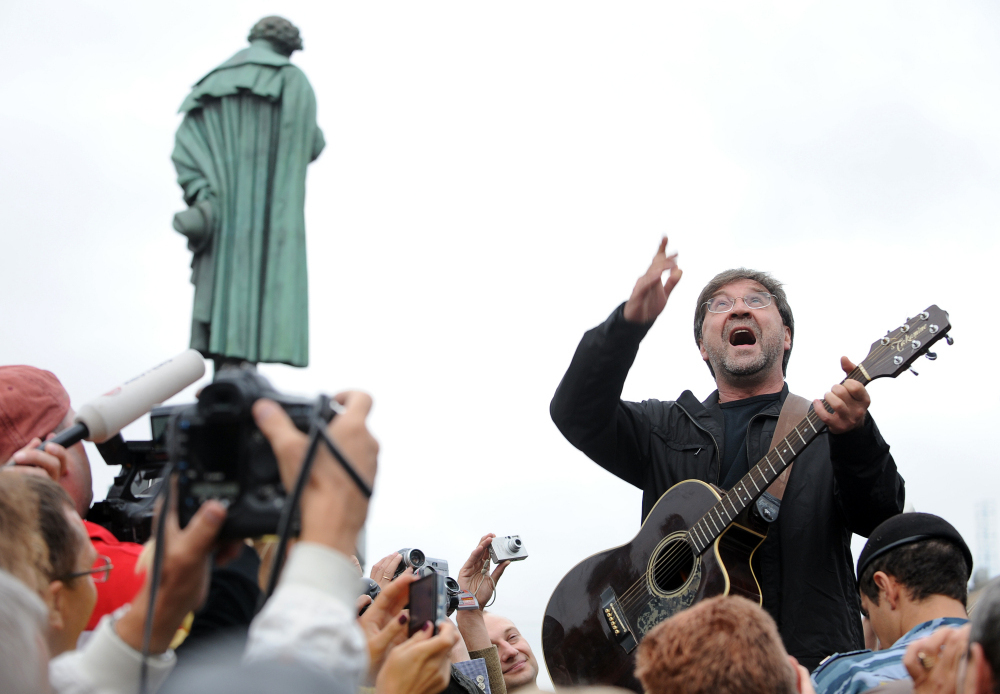 At U2's first-ever concert in Russia last summer, Bono brought up a man named Yuri Shevchuk to help sing Bob Dylan's classic "Knockin' on Heaven's Door." The 50-something Russian rocker had implored Bono to address human-rights issues during his visit to Russia, a cause Shevchuk fights to advance every day.

Shevchuk has been described as Russia's Bruce Springsteen. Back in Soviet times, Shevchuk cleaned streets for a living before forming DDT in the 1980s and growing into an iconic rocker.

I met Shevchuk backstage before a concert a few weeks ago. The 53-year-old has floppy hair and a grayish goatee. He was clinging to a cigarette, drinking vending-machine coffee and talking about an oldie, which, when translated, means "You've Got a Son." Shevchuk remembers getting in a fight with his wife when he was a young man. She left him briefly and took their son with her.

"I was so lonely," Shevchuk says. "The lyrics came to me immediately."

Shevchuk has always connected with working people. He's captured the beauty and pain of everyday life and in Russian society. His family was exiled by Josef Stalin to Siberia, and that's where Shevchuk was born and grew up.

He wrote the enduring hit "Ocen" (or "Autumn") in 1992, after the Soviet collapse. The song is still widely popular today. Shevchuk sings about what will happen to the Russian motherland: Will we crawl, will we find an answer? Will we ever see the dawn? Those questions, Shevchuk says, apply today more than ever.

Many artists face that dilemma: whether to keep their message in the music or engage the establishment directly. Shevchuk has often engaged by attending rallies or peace demonstrations. But many in Russia see his frustration reaching the boiling point. He says he's fed up that so few people are speaking out.

Facing Off With Putin

Shevchuk went to work at an event this past spring that stunned people in Russia. He and other artists were invited to a round-table with Prime Minister Vladimir Putin to discuss helping children with cancer. The event was carried live on TV. When it was Shevchuk's turn, he began asking Putin why there's no free press in Russia and why citizens have to fear the police. Putin listened, stone-faced, his chin in his hand. When the prime minister was answering, at one point he scolded the musician for interrupting.

Putin's answer was boilerplate. Essentially, Russians must endure certain sacrifices in order to truly develop as a democracy. But rarely, if ever, had the powerful prime minister been challenged so publicly.

"A person has been in power for 10 years and no one has ever asked him about anything?" Shevchuk says. "What kind of horror are we living in if our government doesn't have to reflect on these questions?"

Shevchuk says the political opposition is being "shaped" now. President Dmitry Medvedev talks about more open democracy, and the country, Shevchuk says, "is starting to stir." But there was little evidence of Shevchuk unleashing that passion in society at his recent concert in Moscow.

The arena was packed with thousands, loud and ready to party. Shevchuk egged them on. He began with an old Soviet police song. Behind the musician, a Jumbotron played video of modern-day Russian police officers in humiliating moments, downing beers on the street or sleeping on the job. But Shevchuk's fans seemed a little antsy, even bored, as if waiting for the real show. The musician tried to explain himself.

"Guys, maybe tomorrow people will write that it was a political rally," Shevchuk said. "This is not politics. It's simple: We are the citizens of this country. We want equality before the law."

The awkward moment passed as soon as Shevchuk got rocking.

"He was always trying to be where the pain is," says Artemy Troitsky, a music critic who attended the concert.

Many Russian musicians, Troitsky says, are veering away from having a political voice. But Shevchuk, he says, senses opportunity.

"Something is going on right now," Troitsky says. "It's not so boring and down as it used to be from the beginning of Putin's rule. So I think Yuri is very much in the right place in the right time, and the country needs him like no one else."

For 27-year-old Ilona Nabatova, this concert was supposed to be her escape. She is educated and fluent in English, and she works for a German company in Moscow. She says she's embarrassed by the state of democracy in her country.

"The Russian reality is so," Nabatova says. "But we want to go to his concerts and just relax, because his lyrics and texts are really great. We want to just get obstructed from what is going on."

Nabatova says she appreciates what Shevchuk's trying to do, but that she's not confident his political voice will make much difference. You can hear that when she talks about her favorite song.

What does Shevchuk mean by that?

"I think he means he is trying to do too much, what he can, and that's what will be left from him," Nabatova says.

One line from this song — "Pasmoltri na meenya, ne malchee" — may sum up what Shevchuk is imploring young Russians to do: "Look at me, and do not be silent."