Accessibility links
GOP Faces Uphill Climb To Undo Health Law House Republicans who promised their constituents that they would get rid of and replace the health law may find it's easier said than done. With a Democratic majority in the Senate, such a repeal is unlikely to go far.

One of the top items on Republicans' to-do list when they take over control of the U.S. House of Representatives on Wednesday is to undo one of the Democrats' signature achievements of the last Congress: the sweeping health system overhaul. 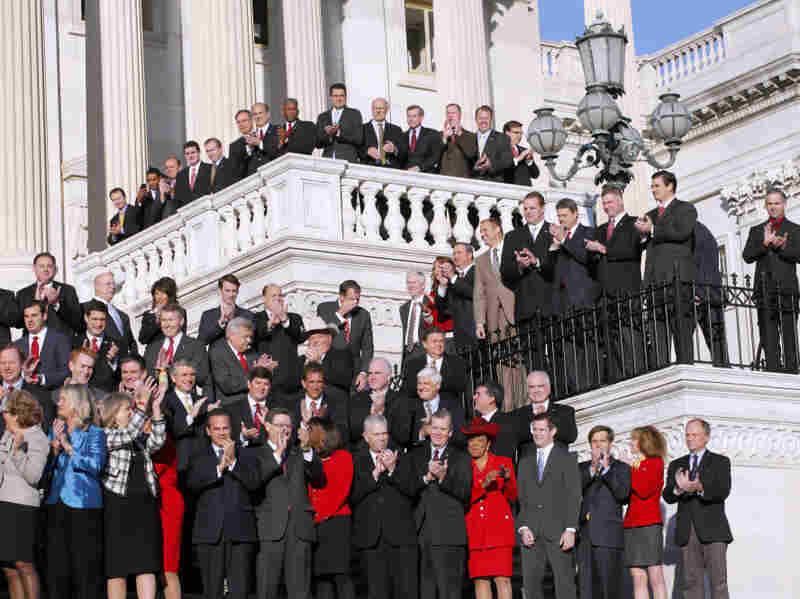 The freshman members of the House pose for a group photo on the steps that lead to the House of Representatives. Harry Hamburg/AP hide caption 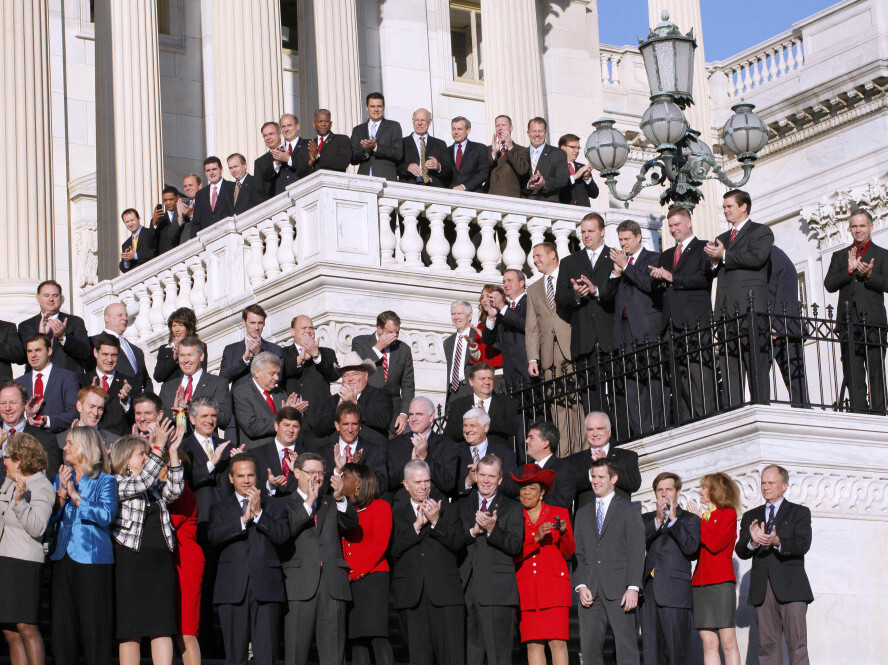 The freshman members of the House pose for a group photo on the steps that lead to the House of Representatives.

"You will see the Republican-led House put a bill across the floor that will call for a full repeal of the Obama health care bill," said incoming House Majority Leader Eric Cantor (R-VA). "That will be one of the first things we will do."

And when that vote comes, which could be as soon as next week, it's expected to pass with overwhelming -- possibly even unanimous -- Republican support.

But while House Republicans are likely to hail it as a major victory and campaign promise kept, it's unlikely to get far in the Senate, which remains controlled by Democrats.

So, Cantor says, House Republicans will then turn to Plan B. "We intend to work with the House committees to make sure that we can delay and defund the ObamaCare bill."

But again, House Republicans can't act alone. And even delaying or defunding it won't be easy.

"I think the president and the Senate will resist that," said Rep. Henry Waxman (D-CA). He's the top Democrat on the House Energy and Commerce Committee and a leading backer of the new law.

Waxman says that because of how the law is written, about the only way House Republicans can deny funding to implement it is by forcing a shutdown of the entire federal government. And if that happens, "I don't think that's going to make them popular with the American people," he said.

Indeed, the last time Republicans forced a government shutdown, in the mid-1990s, the public objected. Instead, voters sided with then-President Bill Clinton.

Which is why, despite many Democrats' hopes, Republicans probably won't do that.

Still, Republicans do have other tools they can use, says Michael Cannon of the libertarian Cato Institute. Particularly the power that comes with gaining control of congressional committees.

"They can do a series of congressional hearings and commission reports ... about particular aspects of this law," Cannon says. "They can look into the behavior of the administration, both during the congressional debate and since the law's enactment."

But Waxman says he's actually looking forward to the GOP hearings, "because it will educate the Republicans, who didn't pay any attention to the bill while it was going through the Congress. And I think the public -- the more they hear about this bill, the more they're going to like it."

Of course, that's what Democrats have been saying since the law passed, and so far polls have not borne that out.

But Drew Altman, president of the nonpartisan Kaiser Family Foundation, says the next couple of years will represent a race of sorts between the people who want to get the law implemented and those who want to see it repealed.

But that won't happen until 2014. In the meantime, Altman says even if Republicans can't do much to change the law now, they have good reason to keep hating it. It keeps their otherwise fractious party unified and looking ahead to the next election.

"Certainly a considerable element of this is political positioning for 2012 and keeping the right revved up, because the law is unpopular with the political right," he says.

Indeed, while the public as a whole remains split roughly down the middle on whether the health law should stay or go, Republicans are overwhelmingly against it. Which is a key reason why trying to make the law go away remains near the top of the new Republican House agenda.