Accessibility links
In London, A Case Study In Opinionated Press Most mainstream American news organizations promise to report "without fear or favor," but many Americans still see the media as biased. So what might it look like if American newspapers openly embraced an ideology, like they do in the U.K.? NPR's David Folkenflik goes to London to find out. 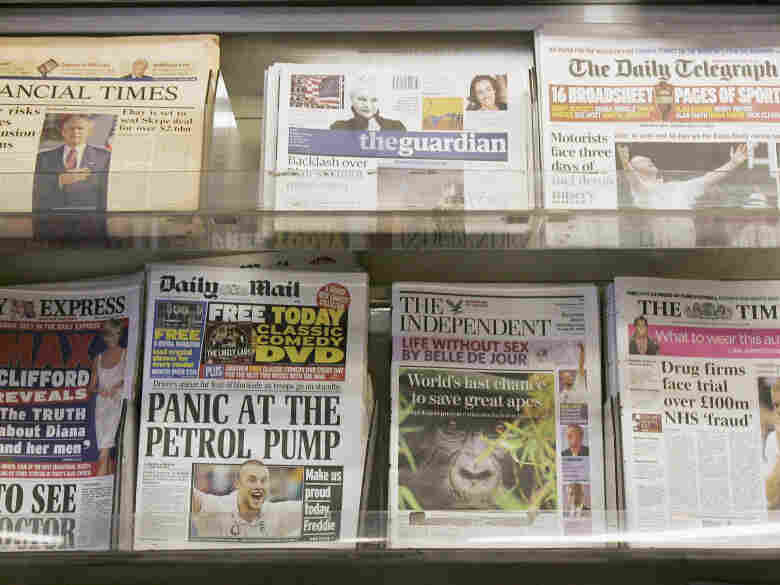 Britain's The Guardian and The Independent profess their left-leaning politics, while The Daily Telegraph and The Daily Mail are known to lean to the right. Scott Barbour/Getty Images hide caption 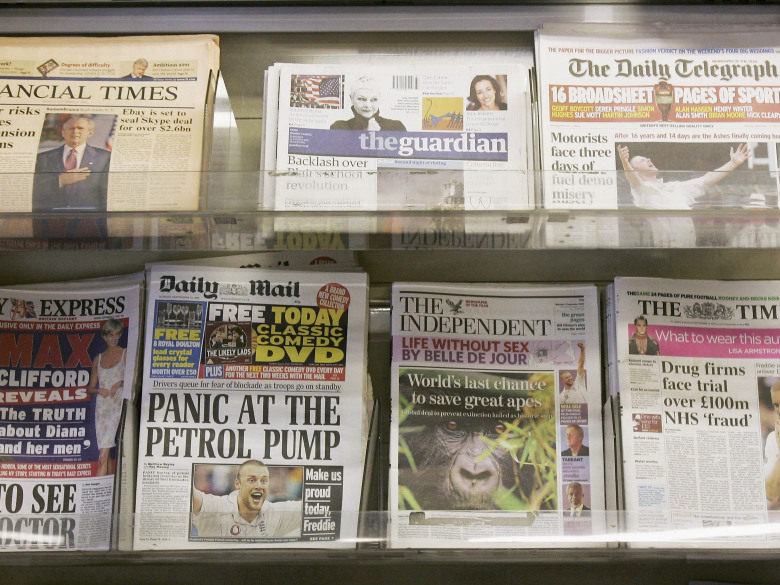 Britain's The Guardian and The Independent profess their left-leaning politics, while The Daily Telegraph and The Daily Mail are known to lean to the right.

This is the first in a two-part series looking at ideology in the media.

British newspaper reporter Polly Curtis strides around back corridors of the Houses of Parliament with a steely confidence in her paper's mission:

Get the facts. Be fair. And reflect a particular political tradition.

"We have the stated aim to be the world's leading liberal voice," says Curtis, the Whitehall (government) correspondent for The Guardian in London. "We are left-leaning, but primarily liberal at heart."

In the U.S., most mainstream news organizations promise to report "without fear or favor," as the saying goes. Newspaper editorial pages with a point of view are segregated from the news reports. There's less of a distinction on cable channels, where intense opinion shows are often rewarded with high ratings.

More In This Series:

So to American eyes, the British media operate in a looking-glass world in which the major TV news channels -- the BBC and Sky News -- try to serve up the news without opinion, but Britain's big daily newspapers are pretty clear about what they favor. And that inversion offers some insight into the debate over media bias here in the U.S.

Historically, The Guardian has backed the Labor Party. But its leader, former Prime Minister Gordon Brown, was faltering and losing credibility among voters during last year's elections. The paper backed the smaller, third party Liberal Democrats instead.

The stance "was controversial within the paper and outside the paper as well," Curtis says, "especially seeing as they ended up in the coalition with the Conservatives, which nobody really saw coming."

'It's Better To Know Where People Are Coming From'

There's no question that ideological and political sympathies in the press are monitored closely by politicians.

"If a Guardian journalist were to interview me, I would definitely assume that they would be trying to penetrate into areas of weakness in what the government is doing ... or particular policies that they are very worried about," says Nick Boles, a Conservative member of Parliament from England's East Midlands region. "Whereas with The Telegraph, they'd probably be more likely to be ... looking for ways in which the government was betraying the Conservative cause."

Boles says he's not crazy about the way either publication treats him, but at least he knows what he's getting.

"In Britain, we feel that it's better to know where people are coming from and then to make up your own mind about what you think, because the truth is nobody can be completely impartial and objective," Boles says. "I mean the idea [that] The New York Times doesn't have a political point of view -- it's ridiculous. It does, but it twists itself into knots in an attempt to pretend that it doesn't."

The Battle Of What Makes News

On the wintry day I visited the Houses of Parliament, Conservative Prime Minister David Cameron was taking questions from his foes in Parliament. It's a weekly exercise in public accountability and political theater.

Labor leader Ed Miliband accused Cameron of being out of touch with working-class Britons: "It's no wonder that today we learn the foreign secretary describes this gang as the children of [former Prime Minister Margaret] Thatcher. It sounds just like the 1980s."

Cameron's retort was greeted with cheers: "Let me say this: I'd rather be a child of Thatcher than a son of Brown."

The exchange was in all the newspapers the next day with Cameron as the winner. Each had a distinct take:

The conservative Daily Telegraph said, "Time after time Mr Miliband hit a weak serve, trotted to the net in the hope of an easy volley, and was blown away by a merciless return from Mr Cameron."

Compare that with the left-of-center Daily Mirror's analysis: "David Cameron yesterday showed his true colours ... declaring his love for a woman who took the axe to industry, destroyed local communities, crushed unions and threw thousands on the dole."

Those are just a couple of examples that help illuminate what many see as a key difference between British and American media.

"I think it's quite a striking thing about the British press that you get this polemical battle over the basis for what news is, which I feel is to a large extent missing in the American scene," Rusbridger says. "No judgments are free of ideologies, so who you choose to quote and how you structure stories are highly political judgments. I think that's the problem with trying to place too much faith in something called objectivity."

Rusbridger points to coverage of the push for war with Iraq in advance of the 2003 U.S. and U.K.-led invasion. He says British coverage was more skeptical of the justification for war because the range of acceptable opinions is far broader in British newspapers.

In the Palace of Westminster lobby, surrounded by marble statues of prime ministers that date back centuries, Anne Begg -- a Labor member of Parliament who represents the south part of Aberdeen, Scotland -- says she reads British newspapers every day, but finds them wanting.

"One of the concerns I have with some of the print media is that it's almost all comment, which is always partial and is always partisan," she says. "In that respect, I don't know if you could call them newspapers anymore -- they're perhaps comment papers."

Both inside and outside of Parliament, Britons say they rely heavily on the BBC to deliver straightforward news. It's a common and unexpected thread around town.

The Guardian's Rusbridger says the existence of the BBC allows his staffers the leeway to ask questions informed by his newspaper's guiding beliefs. But so does the presence of other papers seeking alternative angles on political developments.

"We care about civil liberties," says Curtis, the Whitehall correspondent. "We care about deprivation, deprived communities; we care about people getting a fair deal from a government. But I think kind of the core of the paper is its reporting, and your reporting is fair -- even to opponents of the views at the heart of the paper."

Fair, perhaps. But not necessarily balanced.