Accessibility links
The 'Fallout' Of The CIA's Race To Get Khan A new book by journalists Douglas Frantz and Catherine Collins alleges that the CIA was so obsessed with getting information from nuclear trafficker A.Q. Khan's network, it waited too long to shut it down — and stood by while Khan and his associates spread dangerous nuclear technology around the globe. 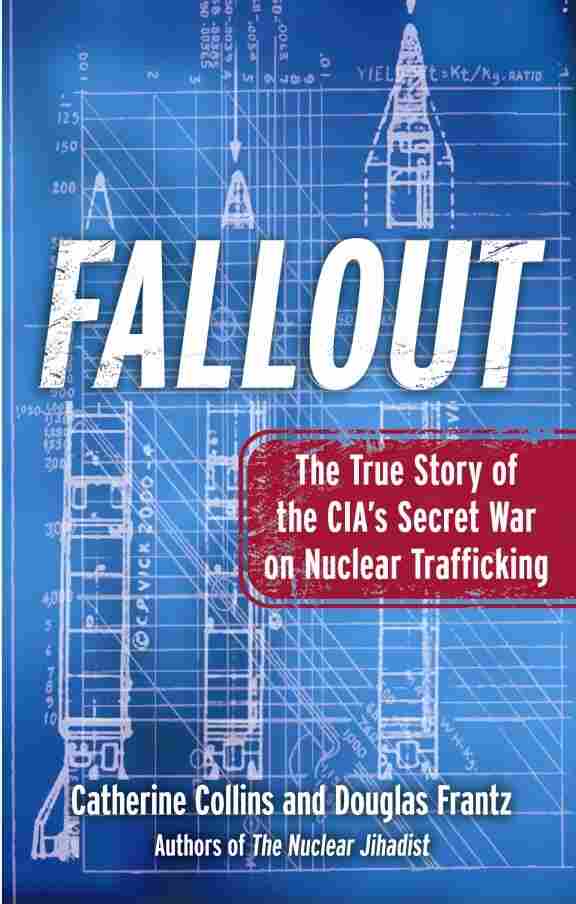 In early 2004, A.Q. Khan, the father of Pakistan's nuclear weapons program, was placed under house arrest for his role in an international nuclear trafficking network. For five years, Khan was confined to his home, after admitting that he shared nuclear secrets with countries including North Korea, Libya and Iran.

At the time, President George W. Bush declared the breakup of Khan's nuclear black market as a major victory for the United States. But in a new book about the takedown of Khan's network, two journalists argue that the United States should have acted much sooner -- and when they did, it was too little, too late.

In Fallout, Douglas Frantz and Catherine Collins track the ways the United States secretly penetrated Khan's network to prevent Libya and Iran from obtaining nuclear secrets. Frantz tells Fresh Air's Dave Davies that the CIA knew about and tracked Khan's nuclear trafficking network for more than 30 years -- but was so obsessed with getting information that it let Khan and his associates spread dangerous nuclear technology around the globe rather than moving aggressively to shut the network down.

"They could literally have stopped him in his tracks [in the 1970s]. It would have done an enormous amount to delay Pakistan building its own nuclear weapon, to delay the arms race on the South Asian continent and to stop Iran from getting where it is on the nuclear front," Frantz says. "This is something that the CIA, in our view, has been guilty of for more than 30 years now."

Khan, a metallurgist, worked for several European governments, including the Netherlands, in the late 1970s, Frantz says. While in the Netherlands, Khan stole plans needed to develop the fuel for nuclear weapons. 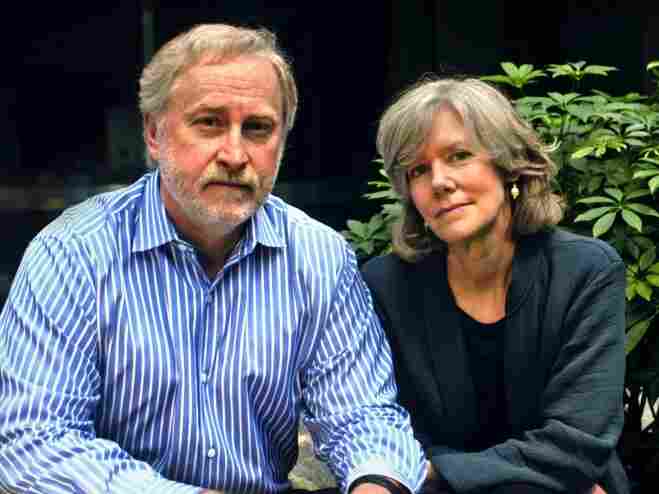 Doug Frantz and Catherine Collins are the authors of The Nuclear Jihadist and Celebration, U.S.A.: Living in Disney's Brave New Town. Frantz is the former managing editor of The Los Angeles Times. Courtesy of Free Press hide caption 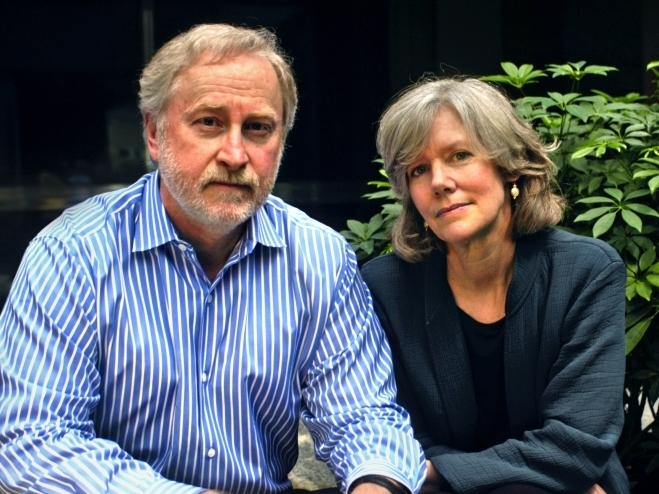 Doug Frantz and Catherine Collins are the authors of The Nuclear Jihadist and Celebration, U.S.A.: Living in Disney's Brave New Town. Frantz is the former managing editor of The Los Angeles Times.

"Instead, the CIA told the Dutch, 'Let him go; we'll watch him,' " says Frantz. "This was in 1975. In the subsequent years and decades, Khan became clearly the most dangerous proliferator in history."

Frantz and Collins trace the way the CIA allegedly infiltrated the Khan trafficking network by recruiting as spies the Tinners, a family of Swiss engineers closely connected to Khan. The three engineers allegedly supplied both the material and technical know-how to make gas centrifuges, which were then sold to Libya and Iran.

They also allegedly worked for the CIA, which is accused of hampering a six-year Swiss federal probe into the family's relationship with Khan by pressuring the Swiss government to destroy evidence in the case.

"The CIA enlisted senior officials in the Bush administration ... to begin to put pressure on the Swiss government to kill this investigation," Franz says. "But two weeks ago, on Dec. 23, a Swiss magistrate announced that he had filed a report with the Swiss attorney general recommending charges against the three Tinners for selling nuclear equipment to Libya. ... If they go to trial, all of this could come out in the open eventually, which would be absolutely fascinating."

Six people -- five men and a woman -- approached a whitewashed house in the postcard-pretty village of Jenins in eastern Switzerland. Glancing cautiously up and down the narrow, darkened street, two members of the team walked to the door while the others hung back. They knew that no one was home. The owner was a few miles away, just across the border in Liechtenstein. One of the men pulled out a leather pouch and extracted a slender piece of metal. He slipped the metal into the lock and gently wiggled it deeper into the mechanism. As he twisted the pick, the slight torque turned against the lock’s internal pins and, one by one, they fell into place and the lock opened. Less than a minute later, the pick man and four other team members slipped silently into the apartment and drew the curtains. The sixth stayed outside, motion­less in the shadows, watching the street.

Inside, the intruders moved with an economy of motion, each carrying out a preassigned task. Their instructions were precise: Search for and copy every document and computer file in the house. One of the intruders sat down at a desk in a spare bedroom being used as an office and powered up the computer. Removing two screws from the back of the computer, he exposed its hard drive. He plugged a small device about the size of a deck of cards into the computer. The device enabled the technician to download the entire contents of the computer quickly. Two other team members were busy opening drawers and rifling through the bookshelves. They photographed every document that appeared to bear any relation to the occupant’s business. While the others were doing their jobs, the team leader moved into the other bedroom, where he pulled open dresser drawers, searching beneath the socks and underwear for anything suspicious. It did not take long. He was short, barely five foot eight, so all he could do was run a hand along the top shelf of the closet. That was where he found the first laptop. Pulling it down, he took the laptop to the person sitting at the computer in the other room. “Have a crack at this,” he said.

The team leader, who was known by his nickname Mad Dog, took out his cell phone and hit speed dial. It was just after midnight on June 21, 2003. Back in Langley, Virginia, where it was early evening, the call was answered on the first ring. Mad Dog used clipped, careful language to tell the person on the other end that the operation was going according to plan. The team expected to be back on the street within a couple of hours.

The call contributed to a building sense of anticipation four thousand miles away. On the third floor of the Central Intelligence Agency’s main building on the campus at Langley, a handful of senior officers from the agency’s Counter-Proliferation Division had been waiting for word from Switzerland. One of them picked up the telephone to relay the status of the first phase up the chain of command. The call went to Stephen Kappes, the ambitious ex-marine who was the deputy director of clandestine operations. Kappes had a strong personal interest in the goings-on in the small village in eastern Switzerland that night. He was no doubt pleased with the news.

The break-in was an ultrasensitive, “compartmentalized” operation. Only a handful of agency personnel with a “need to know” were aware that a specially formed CIA team was inside the home of a private citizen in an allied nation. Certainly, the Swiss authorities knew nothing of the operation. Even the CIA station chief in Bern was in the dark so that he would have deniability if events went sour. The B&E squad had been assembled outside Switzerland. There were two pick-and-lock specialists from the agency’s secret facility in Springfield, Virginia. In a warehouse-like building there, the CIA trains a cadre of technical officers to bug offices, break into houses, and penetrate computer systems. A third team member was a nuclear weapons expert who actually worked for the national weapons laboratory in Oak Ridge, Tennessee. He had come along to provide an instant analysis of documents that would later be scrutinized far more carefully back at Langley. The team’s chief, Mad Dog, was a veteran case officer who had spent his career carrying out delicate and sometimes dangerous assignments overseas. These days, he was posted to the counterproliferation unit at Langley. The four-man crew from the States had been augmented by two agents from the CIA’s huge station in Vienna, Austria. One of them was the woman in charge of the counterproliferation section there; the other was a case officer who had been left outside the house to watch.

The team members had arrived in the country via separate flights a few days earlier. They held a final planning session to make sure everyone understood the mission and their individual responsibilities. Then there had been an initial break-in at the target’s office to copy informa­tion from files and computers there. Entering the office was relatively easy because it was in a fairly isolated industrial area, surrounded by a small parking lot, other businesses, and open fields. There had been little chance of someone stumbling across the operation. Entering an apartment in a tiny village was a riskier enterprise. A neighbor or passerby might catch a glimpse of what was going on and call the police.

Despite what you read in thrillers or see at the movies, break-ins are rare in the world of espionage. This is particularly true for the CIA when it involves an allied country like Switzerland. A few months earlier, two CIA counterterrorism officers had come from Washington to interview an Iraqi defector in Zurich. While they were conducting what they thought was a secret meeting with their asset, someone had slashed the tires of their rented car. They were certain the vandalism was a not-so-subtle warning from their Swiss counterparts: Swiss law prohibited foreign intelligence agents from operating on Swiss soil without prior approval. Frankly, no country likes having the CIA or any foreign intelligence service operating on its soil. Intelligence operations are tolerated only when they are compatible with the interests of the country and remain secret. Simply interviewing an Iraqi defector was a minor infraction, meriting nothing more than a warning. As part of their professed neutrality, the Swiss had a reputation in intelligence circles for being particularly rigorous in enforcing the legal restrictions imposed on foreign intelligence operatives.

The break-in that June night was a much riskier operation. It had the potential for embarrassment that would extend far beyond slashed tires and Swiss borders if the Swiss authorities found out about it or, far worse, if it ever became public. But Kappes and Mad Dog had decided that the potential rewards far outweighed the risks.

How Do Terrorists Get A Hold Of Nuclear Material? April 11, 2010
Profit And 'Peril' In The Secret Nuclear Trade March 18, 2010
Freed Pakistani Scientist Could Revive Nuclear Sales Feb. 12, 2009 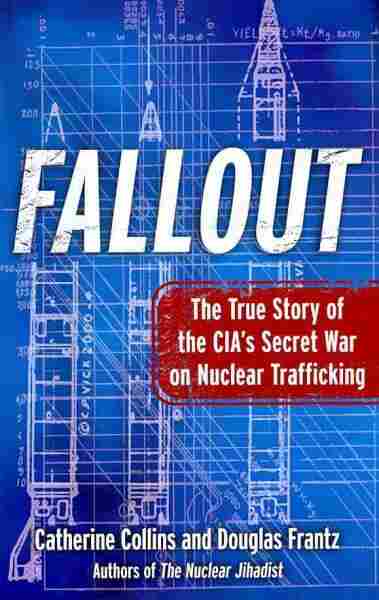 The True Story of the CIA's Secret War on Nuclear Trafficking

by Catherine Collins and Douglas Frantz