Accessibility links
DNA Exonerates Man After 30 Years In Prison Cornelius Dupree Jr. is the 21st prisoner from Dallas to march out of the state prison system. Dallas has so many exonerations not because it was more egregiously unjust than other counties in the state, but because it kept the DNA evidence refrigerated and stored for decades. 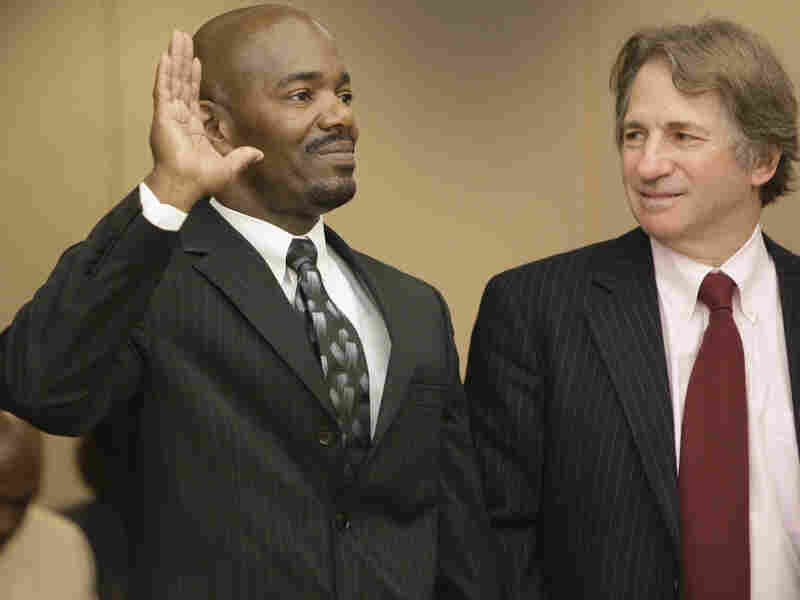 Cornelius Dupree Jr. raises his hand to testify Tuesday while attorney Barry Scheck looks on. Dupree served 30 years in connection with a rape and robbery before being exonerated by DNA evidence. Mike Fuentes/AP hide caption 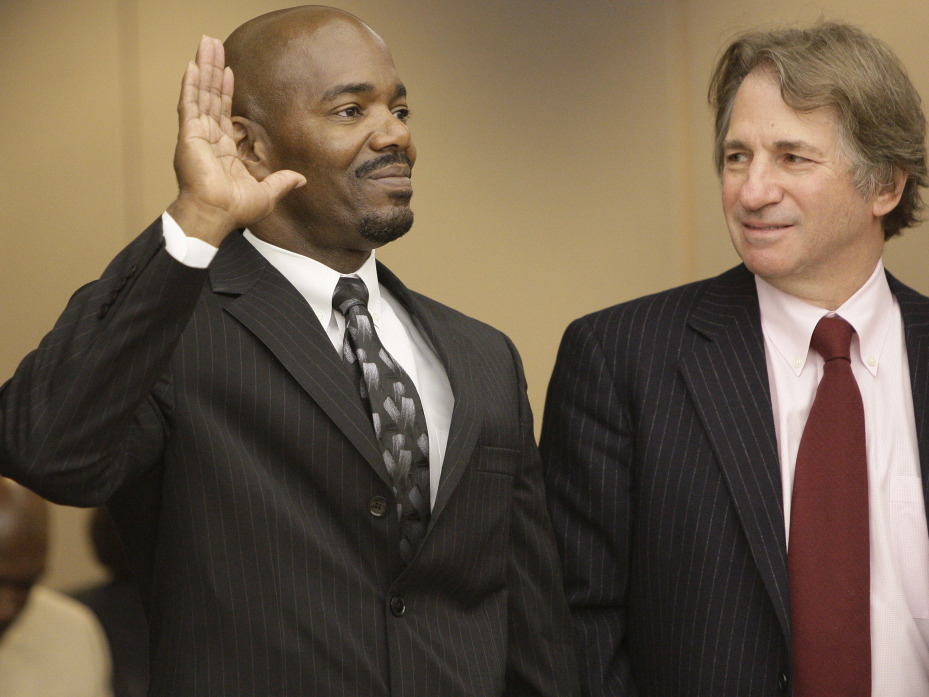 Cornelius Dupree Jr. raises his hand to testify Tuesday while attorney Barry Scheck looks on. Dupree served 30 years in connection with a rape and robbery before being exonerated by DNA evidence.

Cornelius Dupree Jr., who spent 30 years wrongfully imprisoned in connection with a rape and robbery case, said Tuesday that "it is a joy to be free again" after being officially exonerated in a Dallas courtroom.

For the past five years, Dallas has watched a parade of men, nearly all black, march out of the state prison system after wasting decades of their lives. Dupree, who served more time than any other Texas prisoner exonerated by DNA evidence, is the 21st from Dallas -- that's more than all but two states.

Barry Scheck and his staff at the Innocence Project have been behind many of these exonerations, including Dupree's.

"It's a great tribute to Cornelius and his spirit that he was able to fight this long and this hard to win his freedom," said Scheck, who sat next to Dupree in the car as they drove away.

Dallas has so many exonerations not because it was more egregiously unjust than other counties in Texas, but because unlike other jurisdictions, Dallas County kept the DNA evidence refrigerated and stored for decades. That's what saved these men. What convicted them was erroneous eyewitness testimony.

Of the 21 men exonerated in Dallas, 20 were convicted on the strength of the victims' identification. That, in turn, has pointed the finger at the police and prosecutors who are now themselves accused of pushing rape victims to make cases. Scheck says that's what happened in Dupree's case, too.

"The kinds of eyewitness procedures that were used in his case were ridiculous," Scheck said. "And they are the reason that he was wrongfully convicted."

Another one of the reasons these exonerations are happening in Dallas is because it elected Craig Watkins, Texas' first black district attorney. Before becoming DA, Watkins was a defense attorney who says he saw firsthand how the county sometimes railroaded poor black men.

Watkins' willingness to work with the Innocence Project has not made him popular with many of his colleagues and some lawmakers in Austin.

"It's been proven that the system needs to be fixed, and we know actually where we can fix it," Watkins said. "How about those people who are in positions of power and influence getting on board?"

Dupree wasn't let out of prison because he was innocent; he was finally paroled in July after serving 30 years. He says he's not angry, but does harbor some resentment.

"I do have some ill feelings, you know, in terms of how the system went. I had to take so long to finally bring this to light," Dupree said. "It was so many losses; that's what hurts me the most."

Dupree says he just wants to live quietly now and try to enjoy his life.