Accessibility links
Behind Rise Of Xtranormal, A Hilarious DIY Deadpan Have a gripe to bring before the court of Internet opinion? The computer-animation outfit Xtranormal has made a business out of helping people like you hit the meme-creation jackpot. 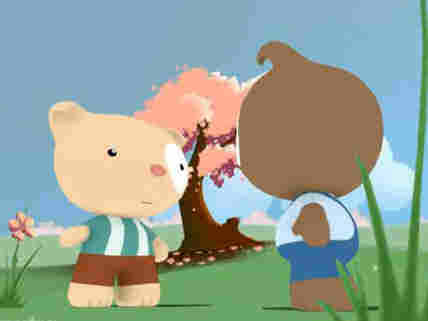 The video that put Xtranormal on the map pokes fun at the iPhone-obsessed -- and has been viewed more than 11 million times since June. Note: This video contains very strong language that may offend some viewers. Watch the "iPhone4 vs HTC Evo" video on YouTube. hide caption

Have a gripe to bring before the court of public opinion on the Internet? Over the past year or so, the insta-animation company Xtranormal has built a business around helping you hit the meme-creation jackpot. The company's slogan is "If you can type, you can make movies," and the do-it-yourself computer-generated animations it makes possible have proved slick competition for old fashioned homemade YouTube videos.

The video that put Xtranormal on the map pokes fun at the iPhone-obsessed: Two button-nosed Hello Kitty-looking characters argue about smart phones in front of a pastel backdrop and a lone cherry tree, all in an affectless monotone that hardly matches an increasingly foul-mouthed script. Since its debut last June, on the day of the iPhone 4 launch, the three-minute animation has been viewed more than 11 million times.

NPR's pop-culture blog had a little early fun with Xtranormal, transforming a Grammy Awards live blog into an oddball short.

An Xtranormal video can be shared more widely than a Facebook status update, requires less commitment than a blog, and packs more visual allure and nuance than a Tweet. Here's how it works: You hop on the site and buy points that you can use to pay for background settings and a couple of animated "actors." To cast the roles of your irrational boss or your freaky neighbor, you can choose from among Lego people, robots or a gang of regular folks. A few celebrity characters are on hand for spoofs. You type in your script, add some basic facial expressions and gestures, and publish to the Web.

It's not uncommon for videos to inspire competition; the hottest animations end up sparking responses in the form of other videos.

"People tend to come to our website to make a movie because they've watched another movie," says Sylvio Drouin, Xtranormal's chief technology officer. "We never invested a dollar in marketing."

Darroll Lawson created a video to extend a conversation that began on his "PhilosoG's" radio show. In a provocative short called "Black Marriage Negotiations," two characters sitting across from one another in a board room hash out tensions around love and dating among African-Americans. Lawson figured animation could take the bite out of what can be a contentious issue.

"The pauses, the way he looks at the camera, all of that lends to the comedic timing," Lawson explains. And Xtranormal's computerized voices can give almost anything a touch of humor, even when it isn't supposed to be funny. (Click here to listen to that sarcastic deadpan at work.)

The most popular scripts have a formula: There's a wise guy who is the voice of reason, and a tone-deaf, argumentative adversary. In the Xtranormal short "So You Want to Get a PhD in the Humanities," a professor levels with a student who is bent on applying to grad school.

"I will teach students to be passionate about literature," says the idealistic student in that robotic monotone.

"You will teach 50 kids in one semester while reading thousands of pages a week while writing hundreds of pages for your jaded professors who are contemplating suicide daily," the professor counters in an equally bland voice. "You will qualify for food stamps."

Grad student Leslie Allison says she made the video instead of blogging about the frustrations of humanities studies.

"Blogging can sometimes come across as ranting," Allison says. "In this format, ranting turns into humor in a way that people will receive it in a positive way."

Xtranormal just hit the 2 million monthly user mark, and adds about 7,000 new content creators a day. The company has also just begun to charge for the service.

This story was produced for Turnstylenews.com, an online news service from Youth Radio.