Accessibility links
American Media's True Ideology? Avoiding One Media critic Jay Rosen says mainstream news reporters don't disclose what they believe enough of the time, and that there would be a real benefit if they did.

This is the second in a two-part series looking at ideology in the media. 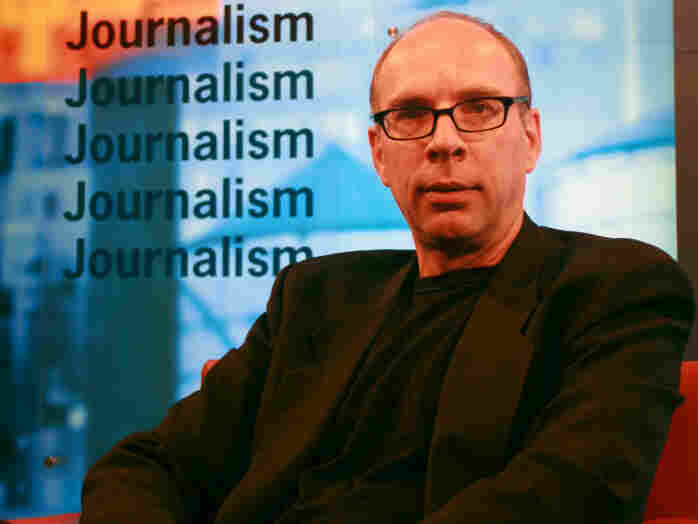 Media critic Jay Rosen says mainstream news reporters don't disclose what they believe enough of the time, but that there would be a real benefit if they did. Matylda Czarnecka hide caption 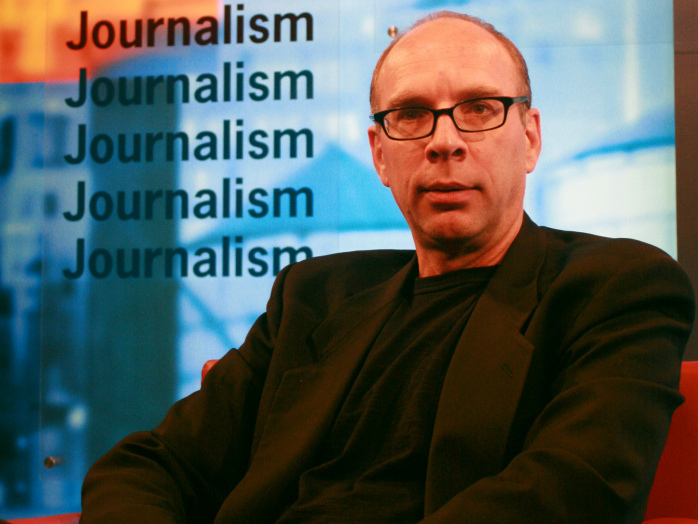 Media critic Jay Rosen says mainstream news reporters don't disclose what they believe enough of the time, but that there would be a real benefit if they did.

In a media landscape littered with opinionated talk show hosts and ideology-driven websites, strong points of view are hardly tough to find.

"I'd like to know something about their background –- like where they're from," says Rosen, an associate professor of journalism at New York University.

"If they've been covering a beat for a while, I'd like to know what fascinates them about their beat, what they think are the biggest challenges facing the nation, who some of their heroes and villains are, and any convictions -- deeply held convictions -- they've developed by reporting on the story over a long period of time."

Rosen says there would be a real benefit to such disclosure.

"We can tell where the person is coming from and apply whatever discount rate we want to what they're saying," Rosen says. "I also think that it's more likely to generate trust. And this is the main reason why I recommend 'here's where I'm coming from' replace 'the view from nowhere.' "

More In This Series:

That phrase -- "the view from nowhere" -- is what Rosen calls the media's true ideology: not exactly on the right, and not exactly on the left. It is, he says, the way news organizations falsely advertise that they can be trusted because they don't have any dog in the fight.

Rosen derived the inspiration for his term from the American philosopher Thomas Nagel, who has written extensively about the ability of humans to look at the world in ways that transcend their own experiences.

The kind of disclosure he suggests goes against the grain of the traditions and experience of generations of mainstream journalists.

Much of the conventional press has guarded against public exposure of journalists' private opinion lest it undermine the ability of readers, viewers or listeners to believe what they print or broadcast. Many journalists say they did not get into the news business to parade their personal opinions. They say they did it to uncover the facts.

Downie is a leading advocate of impartiality in reporting. As executive editor, he went so far as to not vote, an example he did not force his reporters to follow.

Downie says true objectivity is an unrealizable goal. But, he says, dedicated journalists working together can carry out vital watchdog reporting without carrying a brief for any particular side. It's that impartiality that allows readers to trust his paper, Downie says. 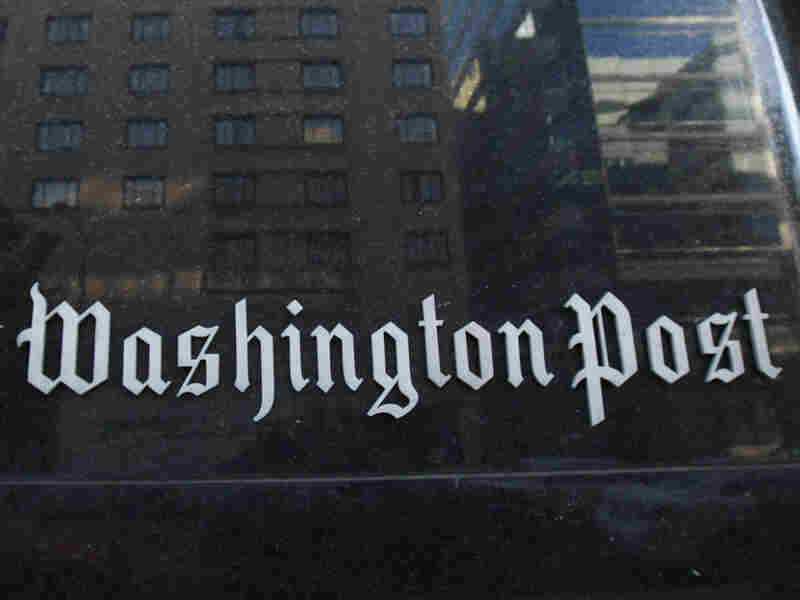 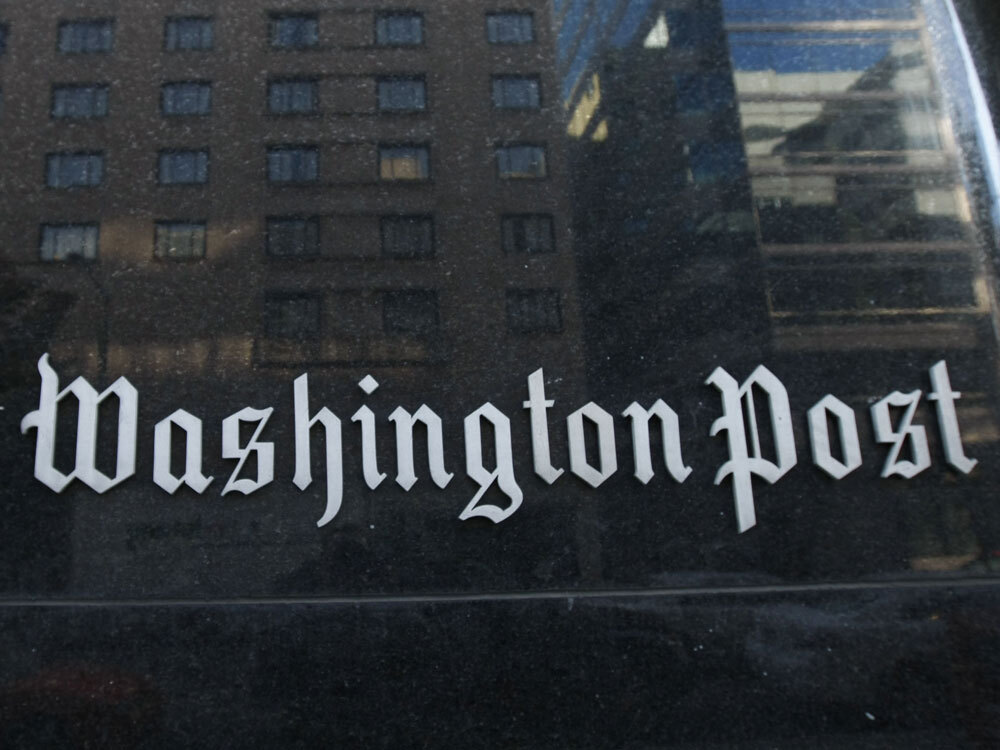 Former Washington Post Executive Editor Leonard Downie, a leading advocate of impartiality in reporting, says dedicated journalists working together can carry out vital watchdog reporting without carrying a brief for any particular side.

"I would be very disturbed if The Washington Post tomorrow became an avowedly conservative or avowedly liberal newspaper," Downie said, when presented with Rosen's critique. "You make it seem as though it would just involve admitting that's what we already are. In fact, it would involve changing what we are."

Executives at mainstream media outlets are often nettled by Rosen's criticism and his often slicing tone. But he can have influence as well. When he suggested that the broadcast network Sunday morning talk shows incorporate a significant fact-check component to see whether guests told the truth, one network took him up on it. ABC arranged for the PolitiFact truth squad to verify statements made on ABC's This Week while Jake Tapper served as its substitute host.

Downie and Rosen agree on one thing: The principle of impartiality in the legacy press is an accident of economics. A century ago, there were several newspapers in every big city -- and each allied to a political faction -- but as papers died off, the surviving dailies sought to strip blatant opinion out of their news pages to appeal to a wider audience. And for decades, such opinion-driven publications as The Nation and the National Review have carved out influential roles in political discourse.

In the United Kingdom, newspapers embrace an ideological point of view that informs their reporting and story choices.

I find American newspapers boring — and biblical. I cannot believe how dull they are. These are news sheets for a genre of readers who want vast slabs of information and get entertainment in a different way. And they are micro-monopolies, all of them.

"I'm rather extreme on this subject," says Simon Jenkins, the former editor in chief of the center-right Times of London who now writes columns for the liberal Guardian. "I find American newspapers boring -- and biblical. I cannot believe how dull they are. These are news sheets for a genre of readers who want vast slabs of information and get entertainment in a different way. And they are micro-monopolies, all of them."

Yet many old-line American news organizations are holding onto those values –- or at least want to be seen doing so. NBC News suspended Keith Olbermann and Joe Scarborough for failing to get approval to make contributions to political candidates, though both are opinion hosts on cable channel MSNBC. Their suspensions were widely considered to be relatively light, at just two days apiece. NPR terminated the contract of former news analyst Juan Williams for repeatedly voicing personal views in other news outlets.

But in an era of hugely profitable cable shows and websites driven by opinions, those standards are under siege.

Rosen points to the decision of Peter S. Goodman to leave his job as national economics correspondent for The New York Times to become business editor at the liberal Huffington Post as a signal moment.

For his part, Goodman says he's less sure his shift represents anything so grand. He said he was offered a great opportunity to shape and edit a new staff of 10 for a young news outlet that is still figuring out what it will ultimately look like.

"This is not about ranting; it's not about working for a particular partisan interest or set of interests; it's not about getting individuals elected," Goodman says. "It's about the same mission that I think has been part of quality journalism forever, which is uncovering truths that aren't so easy to uncover."

He says The Times gave him great leeway to follow his reporting, wherever it led. But Goodman says his reporters at the Huffington Post will have some liberties other news organizations might not afford.

"I don't want them feeling like they have to hand in [stories that say], 'Well, these people said this, those people said that; here, dear reader -- you know, you figure it out,' " Goodman says. "I would like them engaged in a process of getting to a satisfying conclusion."

Conservatives have complained for years about what they see as a pervasive liberal sensibility in the media. This is different. Rosen says the "view from nowhere" too often limits political reporters to obsessing about winners and losers -- who's up or down -- rather than the harder work of determining who's telling the truth or the effects of the policies those politicians adopt.

"Removing all bias from their reports is something that professional journalists actually aren't very good at," Rosen says. "They shouldn't say that they can do this, because it's very clear to most of the people on the receiving end that they fail at this all the time."