Accessibility links
The Nation: Why It's Time To Reform The Filibuster The filibuster rules that have plagued the Senate in recent years are now being debated in the legislative body. John Nichols of The Nation argues that the rules have changed many times, and it is imperative that they change once again.

The Nation: Why It's Time To Reform The Filibuster

The Nation: Why It's Time To Reform The Filibuster 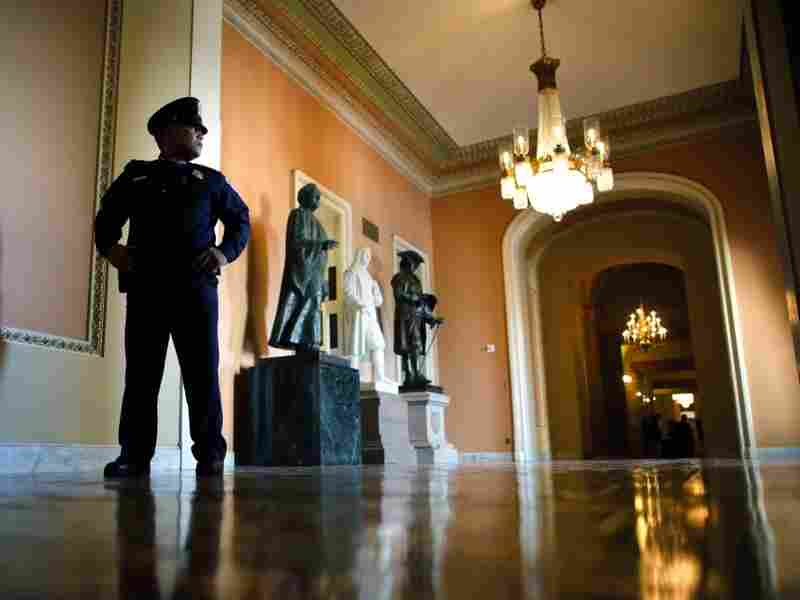 U.S. Capitol Police stand guard outside a closed session of the Senate. Some senators have proposed new rules for the filibuster, which some have seen as a hindrance to passing legislation in Washington. Chip Somodevilla/Getty Images hide caption 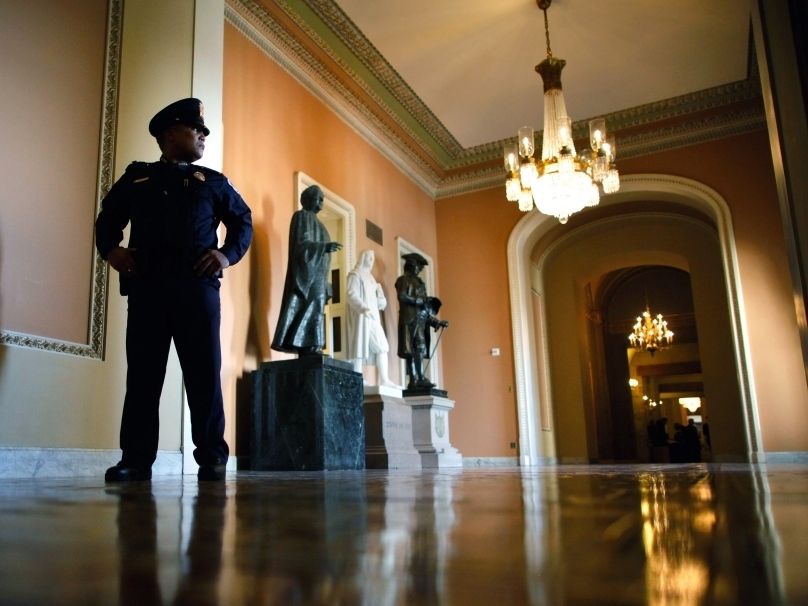 U.S. Capitol Police stand guard outside a closed session of the Senate. Some senators have proposed new rules for the filibuster, which some have seen as a hindrance to passing legislation in Washington.

John Nichols is the Washington correspondent for The Nation. He is also the associate editor of the Capital Times, the daily newspaper in Madison, Wisconsin.

Cato the Younger, who inspired the 18th century proponents of a free society who in turn inspired the libertarian Cato Institute, employed the filibuster to slow Julius Caesar's consolidation of authority over the Rome Senate. Caesar jailed Cato at one point and then thought better of it; the consul released Cato, learned a few legislative tricks of his own and succeeded in circumventing the delaying tactic.

So let's accept that the filibuster has a history.

Let's also accept that the history is one of constant evolution that has always erred on the side of constraining rather than empowering the outliers who would use it to impose the will of the minority on the majority.

As Senate Democrats maneuver this week to implement a relatively minor reform of the current filibuster rule -- beginning a process that could take weeks, even months -- what should we know about Cato's tool?

1. It All Goes Back to Pirates.

Derived from a Spanish word for pirates ("filibustero," or freebooter), the term "filibuster" was first used in a legislative context to describe those who hijacked the legislative process. Specifically, it refers to the tactic of grabbing control of the schedule for debating and voting on bills -- which is traditionally set by the leadership -- for the purpose of achieving an end not favored by the majority.

2. Which Foolish Founder Included a Hijacking Provision in the Constitution?

Don't blame James Madison, or George Mason, or Alexander Hamilton for this one. There is no provision for the filibuster in the U.S. Constitution. Nor were there any filibusters in the first fifty years of the U.S. Senate. It was not until 1841, during the debate on the bill to charter the Second Bank of the United States, that something akin to a filibuster was used. Even then, the tactic was so rarely and gingerly adopted that it has been said that sightings of comets were more common than filibusters in the 19th century.

Only in the past decade has the filibuster become a common tactic, but what passes for a filibuster today does not resemble what most Americans think of when they hear the term. Today, senators threaten to filibuster and on the basis of the threat, the Senate majority leader does not schedule a vote until a super-majority, two-fifths of sworn senators (60 members), are ready to force action. The fake filibuster tactic has become exceptionally common in recent years, as the Senate has adopted a two-track system that allows consideration of controversial legislation to be delayed while other measures advance. The effect has been dramatic. Where in the 1950s, years might go by without a single cloture vote to end debate, more than 130 cloture motions were filed in both the 110th and 111th Congresses.

3. The Filibuster is a Parliamentary Procedure, Not a Speech

Mr. Smith Goes to Washington provided us with all with an image of what a filibuster looks like -- a long, exhausting speech by a member determined to block a bad bill. But Senator Jefferson Smith was really just buying time in which to address the flaws in the bill -- and to defend himself against trumped-up charges of wrongdoing. By hijacking the legislative process, he bought the time, raised the right concerns and beat the bad guys.

Smith's speech was a rhetorical mishap, ending with the senator's collapse. But the delay worked. And that's the key thing to recognize about filibusters as they have historically been understood; whatever form filibusters take, the point is to free up deliberations, to slow the legislative process, not to prevent it from functioning.

Everyone knows that former South Carolina Senator Strom Thurmond conducted the longest filibuster in Senate history. Thurmond did speak for the better part of 24 hours -- the official time was twenty-four hours and eighteen minutes, but the segregationist was allowed to take 90 minutes worth of breaks. But he was actually taking advantage of time allotted for debate by the Senate leadership, not filibustering.

Thurmond was trying to block action on the Civil Rights Act of 1957. The bill, the first major civil rights legislation enacted in the modern era, passed pretty much on schedule after Thurmond blathered on through a long night to a mostly empty chamber. That's because Thurmond acted on his own, without the support of the two-fifths of the Senate needed to extend debate; Thurmond's fellow Southerners actually condemned him as a silly grandstander and refused to back his effort.

As the New York Times noted at the time: "The Senate entered the dramatic phase of the debate after Senator Thurmond surrendered the floor. Mr. Thurmond's delaying action was the longest by a single member in the history of the Senate. It was widely but incorrectly described as a filibuster. It was never this, as pointed out by the assistant Democratic leader, Mike Mansfield of Montana, among others, because it was simply a one-man demonstration without the organized and collective characteristic that is indispensable to a filibuster."

Filibusters are not one-man or one-woman initiatives. They are not even the initiatives of small blocs of senators. Since the rule allowing cloture (the ending of a filibuster by a super-majority of senators) in 1917 -- in a move designed to prevent antiwar senators led by Wisconsin's Robert M. La Follette from preventing the Wilson administration's rush to join World War I -- a genuine filibuster has required the support of dozens of senators to be maintained.

6. The Rules Regarding Filibusters Are Constantly Changing

The adoption of the cloture rule is just one example of the evolution in rules regarding the filibuster. And it is a good illustration of how the changes occur. Initially, debate could only be ended if two-thirds of Senators casting votes agreed. That was the rule from 1917 to 1949, when the wrangling over civil rights led to a toughening of the requirement so that the votes of two-thirds of the entire Senate membership was required. In 1975, senators elected in the "Watergate" election of 1974 joined with older reformers to significant lower the required number of votes to end debate -- from two-thirds of the entire Senate to three-fifths. Thus, instead of 67 senators, just 60 could invoke cloture. The reform Senate of 1975 also eliminated the "post-cloture filibuster," in which a minority of senators could use points of order to extend debate and delay a vote.

In the 1990s, Republican senators effectively established one of the most radical restrictions on the filibuster, a broadly interpreted rule allowing budget bills to be brought to a vote with the support of a simple majority of senators.

7. So How Do Filibuster Rules Get Changed?

The general standard, adopted decades ago, is that each new Senate adopts its rules. Vice President Richard Nixon, in his constitutionally defined role as the president of the Senate, did so in 1957. Vice President Hubert Humphrey reinforced the point in January, 1969, when he held, as the New York Times noted, "that the Senate has the right to change its rules by a simple majority at the beginning of each new session."

8. What About the "Nuclear Option"?

In the 2005, Senate Majority Leader Bill Frist, (R-TN), and a group of GOP senators floated the idea of having Vice President Dick Cheney -- as Senate president -- rule that Democratic filibusters of then-President George Bush's judicial nominees were inconsistent with the constitutional provision that nominees be approved with the "consent" of the Senate. The theory was that "consent" meant a simple majority -- not the super-majority required to invoke cloture.

This was referred to as the "nuclear option" by critics, as it would have allowed the vice president to rewrite the rules of the Senate. Supporters referred to it as the "constitutional option." In either case, Cheney did not make the move, in part because moderate senators of both parties acted (as the "Gang of 14") to block it. The option remains viable, however, as neither the Senate nor the Supreme Court has examined it.

9. The Senate is Being Rendered Dysfunctional By Filibuster Abuses.

Retiring Pennsylvania Senator Arlen Specter, who has served as both a Republican and a Democrat, summed things up well in his valedictory address, when he decried the way in which abuses of the rules have rendered what was once referred to as "the world's greatest deliberative body" so dysfunctional that "the days of lively debate, of many members on the floor, are all gone."

The need for reform is obvious. As he came to the end of his long Senate tenure, Specter proposed a set of reforms that began with a plan to repair the filibuster rule by returning to traditional practices, such as a requirement that those engaging in filibusters actually speak on the floor of the Senate rather than threaten to do so. Specter also suggested that a simple majority vote of 51 senators be allowed to cut off filibusters on judicial and executive-branch nominees, rather than the current 60 requirement, and he proposed that the ability of senators to place secret "holds" on nominations be limited. Specter's right when he says that with "a requirement for debate, not just notice…filibusters could be effectively managed as they have in the past."

Specter can't lead the charge for reform, but the remaining Democratic and independent senators can. No one is proposing to do away with the filibuster. Rather, the proposal is for a reasonable rule changes designed so that, in Specter's words, "filibusters could be effectively managed as they have in the past."

While all members of the Senate Democratic Caucus have indicated support for some sort of reform, the leaders of the push have for the most part been relatively junior senators elected in the 2006 and 2008 cycles. Their proposals, while varying to some extent, would generally leave in place the current 60/40 structure on cloture votes. It would still take 60 votes to end debate and bring a bill to a vote. A minority of 41 senators could keep a debate going but -- and this is the core of all reform proposals currently in play -- it would have to be a real debate, not merely a delaying tactic that defines the limits of legislative action.

To read the rest of this article visit The Nation.